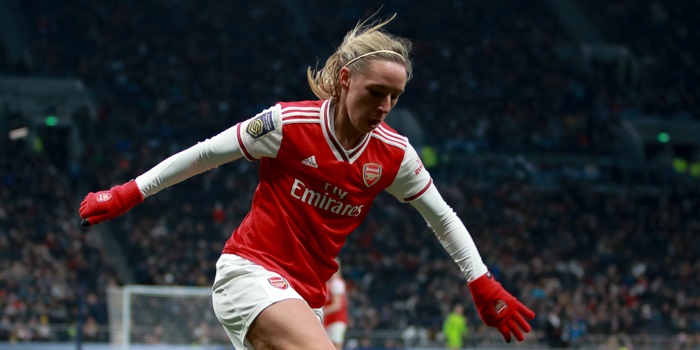 Arsenal today announced that midfielder Jordan Nobbs signed a new contract with the club. It extends Jordan’s 10-year stay in North London, a spell which has seen her win three league titles, four FA Cups and five League Cups. Today, we look back on five of Jordan’s best moments in an Arsenal shirt.

26th May, 2013. Keepmoat Stadium. Bristol Academy 0 Arsenal 3
Jordan has played in a total of 12 cup finals for the club. This was her fourth in Arsenal colours, but saw her score in a showpiece final for the first time. A Gunners side featuring the likes of Steph Houghton, Ellen White, Emma Byrne, Alex Scott, Rachel Yankey and Kim Little dominated Mark Sampson’s Bristol Academy side.

Steph Houghton gave Arsenal the lead in the first half, only some poor finishing and an excellent display from Vixens goalkeeper Siobhan Chamberlain kept the score down. In the 72nd minute, Jordan put the result beyond doubt when Gemma Davison lofted a cross from the right wing and Nobbs arrived on the back post to loop a header over Chamberlain and into the far corner. Ellen White added a third in the dying minutes to seal another FA Cup triumph for the club.

City screamers
22nd August, 2014, Academy Stadium. Manchester City Women 0 Arsenal 4
I am cheating slightly by submitting two moments into one entry, so sue me! In August 2014, the Gunners met the newly revamped and relaunched Manchester City Women’s team for the first time. Arsenal taught City a lesson with a resounding 4-0 win thanks to goals from Jordan, Dan Carter, Rachel Yankey and Casey Stoney. Jordan set the tone for the game after just 6 minutes, with an audacious 40-yard lob over City ‘keeper Karen Bardsley.

28th May, 2017. Academy Stadium. Manchester City Women 0 Arsenal 1
Pedro Losa’s Arsenal travelled to Manchester to take on Nick Cushing’s side in the 2017 Spring Series- a bridge competition as women’s football moved from a summer to winter calendar. Jordan proved to be the difference between the teams with a stunning second half free kick. Nobbs used the “knuckle-ball” technique to perfection as the ball floated into the top corner past Bardsley’s despairing dive from around 32 yards out.

1st November, 2015. New York Stadium. Notts County Ladies 0 Arsenal 3
Arsenal had been the sole winners of the Conti Cup since its 2011 rebrand until a late defeat to Manchester City in the 2014 Final. The Gunners were determined to win their trophy back in 2015 and no player more so than Jordan. She showcased her range of attributes with a first-half double to set Arsenal on their way to victory.

Nobbs opens the scoring with a scampering run down the right hand side, before motoring into the area and blasting the ball past Carly Telford. Minutes later, Jordan collects a half clearance from the Magpies defence and lashes the ball into the top corner from 25 yards. Chiomu Ubogagu added a third in the second half, but this was very much the Nobbs final.

14th October, 2018. Kingsmeadow. Chelsea Women 0 Arsenal 5
Arsenal travelled to Chelsea in October 2018 on an excellent run of form, but even they were surprised to run out 5-0 winners at the ground of the defending champions. A Kim Little penalty and a Vivianne Miedema goal gave the Gunners a 2-0 half-time lead. Predictably, Chelsea flew out of the traps early in the second half, with Arsenal soaking up pressure.

Arsenal relieved the pressure with a ball down the right hand side and Nobbs tried to hit a cross to Miedema. She slightly miscued (she would tell me after the game that it was ‘the worst cross I ever hit in my life’) and the ball sailed into Carly Telford’s top corner. The Blues were shellshocked, Miedema added a fourth, before Nobbs sprinted through a weary Blues defence to steer the ball beyond Telford for a fifth later in the game. “Today has been a turning point for us in terms of winning here and showing that we are serious about winning this title,” she would say after the game. Too right.

25th August, 2019. Meadow Park. Arsenal 6 Tottenham Hotspur Women 0
After a cruciate ligament injury cruelly cut short her 2018-19 season, Nobbs appeared in a behind closed doors match against West Ham in August 2019- her first game since rupturing her ACL nine months earlier. Her first game back in front of her adoring public arrived later in August, in a pre-season friendly against Spurs.

Jordan was a half-time substitute and it didn’t take her long to make her mark on proceedings. Katrine Veje fizzed a low cross to Vivianne Miedema, who touched the ball into the path of Nobbs who stroked the pass into the bottom corner first time. It was just 5 minutes into her comeback and the best possible way to mark her return.

? "It's literally the best badge in the world" ☺️

It's so good to see you back on the pitch, @JordanNobbs8 ♥️ pic.twitter.com/Q4yI9MrmZt

Great read/watch. Can’t wait to see her thrive in these coming years. She is an asset on and off the pitch!

That’s what converted this ancient Gooner to AWFC junkie. When these girls SAY they love THEIR club you BELIEVE them 100%.
Great that Jordan is staying. Was there any doubt?