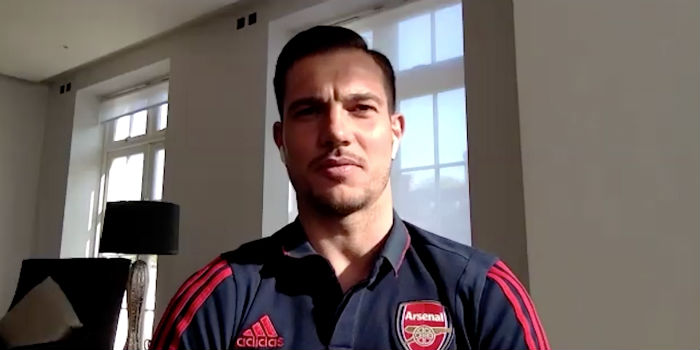 It is now 83 days since Cedric Soares signed on loan for Arsenal and he’s no nearer to kicking a ball in anger for his new club.

Injured on his arrival from Southampton, the back-up right-back was on the verge of a return to action when the coronavirus lockdown was imposed on the UK public.

It’s been a frustrating time for the Portuguese defender who is now chasing down Michal Papadopulos’ record for the longest wait for a first team outfield loan signing to make a debut for the Gunners.

The Czech striker waited 124 days for a League Cup cameo against Wolves in December 2003 after signing from Banik Ostrava in August that year. Kim Kallstrom has dropped to third in the list, waiting a paltry 54 days for his debut in 2014. Goalkeeper Emiliano Viviano leads the overall list having been confined to the bench for the entirety of his season-long loan spell from Sampdoria in the same year. (credit Optarse Joe)

Soares says he’s looking forward to running out at the Emirates but recognises the need for patience.

Speaking to Sky Sports, he reflected: “I wanted to be involved as soon as possible, but coronavirus is a world problem and I think as a country we are all responding very well together.

“I’m very excited for my first game for Arsenal. It’s a game of patience and I know it will happen in the near future.”

In the meantime, Soares has been teaching his dog to jump over stuff and has had his hairdresser teach his wife how to cut his hair via FaceTime tutorials. Not a line I ever expected to write.

“The dog is very little and is only five months old,” he revealed. “He already sits but we are trying to make him lie down.

“We’re now trying to make him jump over things. It’s difficult and it takes a bit of patience, you know.

“I am training everyday and trying to cook something different sometimes. We are watching series on TV and cutting hair.

“We called my hairdresser on FaceTime to follow his guidance. Of course, it’s not the same but my wife is doing a good job.

If he’s as dedicated to looking tidy as he is to defending, we may well have a player on our hands when the action resumes.

Holding: It was a good bit of revenge

It’s reassuring to see everyone else is bored shitless as well.

Hahah, yes even millionaires with way more stuff and bigger houses are bored. Makes me feel slightly better about not being one!!

Tbf I’d forgotten about him

Lucky man, can choose between a wife and a girlfriend for a haircut

I wonder if it’s just the haircut where he has options?

Waiting to see you in Arsenal colours

If the season is null and void they should use last seasons standings really. Otherwise it’s having it both ways really