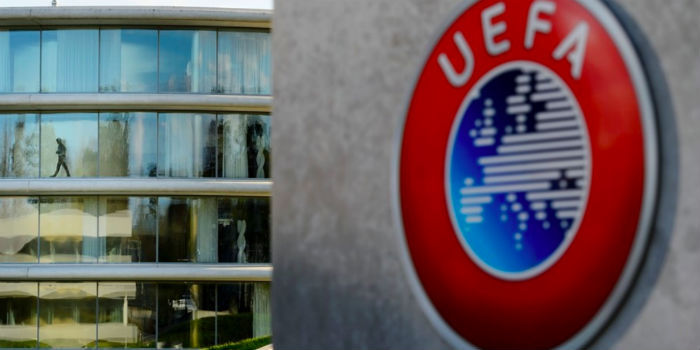 According to the BBC, Uefa are set to confirm that they will use sporting merit rather than club coefficient to decide which teams will qualify for European competitions in 2020/21 if domestic seasons can’t be completed.

It emerged yesterday that using the club coefficient system to decide such matters would be raised at today’s ‘showdown’ talks between the governing body’s 55 member nations.

Had Uefa agreed, Arsenal, thanks to having the fourth best coefficient in the Premier League, would have benefitted at the expense of several sides above them in the current rankings to take a spot in the Champions League.

Cue excitable chatter on social media and the poking of fun at fans of Spurs, Chelsea, Leicester, Wolves and Sheffield United who would have suffered should time be called on this season.

Gooner laughter has been short-lived. Unsurprisingly, the idea did not get much traction. Uefa will advise leagues that final league rankings should be decided on either a points per game basis or by current rankings. Arsenal are 9th in the table and even with a game in hand on six sides above us, we wouldn’t make the Europa League. That would mean a fond farewell to the European trophy bonuses that were said to have been agreed by the majority of our squad as part of the wage cut negotiations. Oh well.

On a more serious note, it’s a pretty awkward scenario for the Gunners who would not only be facing the prospect of lost broadcast revenue from the failure to complete this campaign but also lost broadcast and matchday revenue from not being in any European tournament at all.

While Uefa is very keen to see all current campaigns completed, Holland and Belgium look set to call a premature halt to their domestic seasons and Scotland are likely to follow suit.

In contrast, the Bundesliga could return, albeit behind-closed-doors, as soon as 9 May.

It’s not clear when the Premier League, who are more desperate than most to complete the season, might resume, if at all.

Update – The Telegraph report this evening that there’s another way Arsenal might qualify for Europe next season. If the FA Cup cannot be played to a conclusion then another of the Europa League places may go on Premier League placings. Despite being being behind Spurs in the table, we’d snatch the place based on a points per game basis because we have a game in hand on our neighbours.

That’s a shame. Would have been hilarious. I agree that it wouldn’t exactly be fair to some clubs. But no path that can be taken will be fair to all clubs.

And the coefficient is a measure of sporting merit. Or did UEFA just say their selection and ranking system is a farce?

whichever way its done, some teams will be shafted unless the season is completed with the games actually being played. In an ideal world, the season is scrapped so Liverpool miss out, Man City’s ban is upheld and the 5th placed team last season gets next seasons CL spot, which happens to be us ?

Several PL clubs would almost assuredly have to declare bankruptcy if the season isn’t finished as the combination of the loss of tv revenue & match receipts would push them over the edge. Burnley has already said as much. The players are under no obligation to forgo salaries if the season isn’t finished which means clubs will still have high expenses with no revenue.

“That would mean a fond farewell to the European trophy bonuses that were said to have been agreed by the majority of our squad as part of the wage cut negotiations.”
As far as I know, these bonuses are about next seasons qualification for Europe?

I alway thought it was about this season.

it should be either season. it’s more realistic and maybe some players would be enticed to stick around

What a fucking farce.

Quote – “Uefa will advise leagues that final league rankings should be decided on either a points per game basis or by current rankings. Arsenal are 9th in the table and even with a game in hand on six sides above us, we wouldn’t make the Europa League.” I think that’s wrong because Man City are banned from Europe next season, and on a points per game basis, Arsenal would finish above Spurs. (Arsenal have 1.42 ppg, Spurs have 1.41). So Champions League spots will go to Liverpool, Leicester, Chelsea, Man United, and Europa League spots will go to Sheffield… Read more »

So if we finish ahead of Spurs because we’ve played a game less, does that mean St. Totteringham’s Day still happens?

A Different George
Reply to  assistantref

Not sure, but I think it means it already happened.

I like the plan in the update because we’d qualify at the expense of sp*rs and you just know that Maureen would find some way to blame his players, causing a total meltdown.

It’s pathetic how desperate we are for one of these scenarios to play out, what happened to my arsenal man….

Hi guys. Because I give a shit about y’all, I’ll tell you this. Everything is a Business transaction. Even your romantic relationships, because you consciously or unconsciously chose a ‘brand’ to partner with. Just make sure both sides receive what each individual’ came into the business relationship for and with complete mutual respect and Us against the world (which is basically other companies) attitude.

If we don’t end up in Europe whenever next season happens (and in fairness, when you’re 9th it’s hard to argue you deserve to be) I just hope people don’t blame Arteta et al as the reason for that failure. It was the executives who stuck with Emery far, far too long who would have caused that loss of income/a potential trophy.

Do I need to double space my replies.