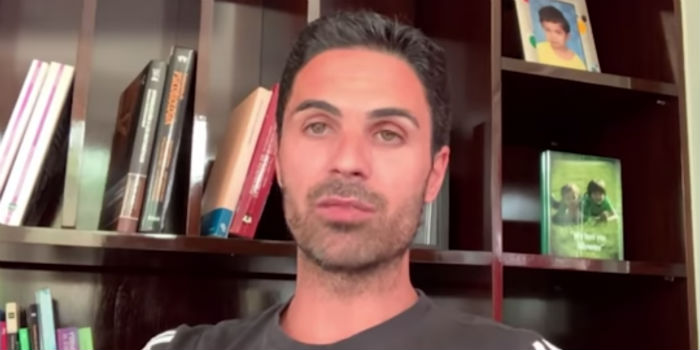 Mikel Arteta says he made a point of telling his Arsenal stars how lucky they are to represent the club as part of a plan to restore energy to the club.

When the Spaniard took over from interim boss Freddie Ljungberg in December, he found a dressing room lacking self-belief and discipline after a torried six months under Unai Emery.

Having captained the club prior to his retirement in 2016, Arteta was instantly struck by the ‘disconnect’ between players and made it an immediate priority to rectify the situation.

Speaking to Ian Wright on the Adidas Twitter account, he admits his project is a work in progress but he’s optimistic for the future.

“It is happening [the transformation],” said Arteta. “Coming into the club in that moment wasn’t easy but you mention a key word which is ‘energy’ and I felt that the energy around the training ground and the stadium wasn’t right for this magnificent club.

“I was here and was lucky to play here so everyone first of all has to feel in that way. There was a lot of disconnection in many areas and I wanted to bring everyone together.

“First of all to make everyone understand how lucky we are to be here and then a very clear direction of where we have to be.”

He went on to stress just how important it is to get the players to believe in him and his methods.

“I need the players, they are the actors. I have to convince them to follow me, but with a why, with a purpose. Why are we doing it? The reason behind it and how we’re going to do it.

“If they understand and they believe me that this is the way for them to enjoy more their profession, to be more successful, to be more competitive, I think then, we can transmit that to the fans, the world, our employees, our staff around the world.

“I have this belief, hopefully they can follow us and hopefully the fans and everyone can buy into it and we can generate that bond that is very much needed.”

Arteta also suggested that it’s never a good start if existing players or potential recruits need to be persuaded that Arsenal is the right place to be.

“The moment we mention Arsenal, Ian you know what it means around the world,” said Arteta.

“Everybody wants to come here and we have a really clear idea of what we are.

“It doesn’t need much convincing and if they do, for me it’s not a good starting point. If I have to convince a player to stay or to join us. To Arsenal? It holds me back a little bit.

“It has to be ‘what do we have to do? I want to play for that club and represent exactly the values the style of play that I want’. That’s the kind of emotion I want to hear at the start.

“The same with the players that are here. Once you finish what are the feelings you have towards the club? That’s what really interests me.”

Arsenal and Arteta are still none the wiser as to when football might return. While Germany’s Chancellor Angela Merkel has give the green light for Bundesliga matches to take place this month, it looks like it could be another five week at least before Premier League sides resume the 2019/20 season.

Between now and then, Arteta believes that clubs must educate their players in the ‘very strict’ safety rules which make up part of ‘Project Restart’.

“There is a lot of question marks,” said Arteta. “I think the hardest thing is educating the players and everybody involved at the training grounds and on match days, that this is different.

“We cannot rush it. We are all aiming to play, we need to play, we are willing to play – it is important for society and the economy.

“We have that responsibility. We just have to be ready for whenever they say ‘Go ahead, open that door’ so we can hit the gas.”

Hit the nail on the head. Players who “want” to play for Arsenal and not just manoeuvred by their money grabbing agent will likely give it their all. I have issues with all these super agents and chief executives who only have their own interests at heart. We’re a bit like that now and it’s sad.

I think there are going to be tough times financially ahead for a lot of people. Players trying to get get big pay days need to remember just how lucky they are as I can’t see fans having much patience with those playing hard ball with the club. I think Arteta is laying the gauntlet down to Auba with this. Smart money says he is off this summer. Time to rebuild with people that are bought in. I am more concerned about nailing Saka down to a new contract right now.

He’s a very good young player but if Saka doesn’t want to sign he should also be offloaded. There aren’t many clubs who would have given him the chance and the support that Mikel Arteta has given him, and if he doesn’t buy in to that then he can go, preferably somewhere far away.

Personally I think its more about showing Saka we believe in him as a left winger. Currently we’re playing Auba, Martinelli ahead of him. We’ve also used Nelson a couple of times. There are links to Willian. Competition is fine but at some point we need to trust the kids abilities and treat him as one of two players in a position…

He’s played every game and had the whole team adjusted to accommodate him, if he wants to go down the Maitland-Niles route, who I can see being sold in the summer, then goodbye. We have plenty who can play on the wing, and I’m sure he’d get his chance there in future, but at his age you take your chance and don’t pick and choose. You don’t hear this nonsense from Martinelli and other youngsters.

He’s played at LB where Tierney is first choice. Atm there are 2 players ahead of him on the left wing. If Arsenal don’t qualify for Europe, player rotation will further reduce. Despite being second choice on the other wing just look at how many starts were given to Nelson last season. Compare this situation to the alternative for Saka. Bayern are looking for a left winger to compete with Coman. Sane may be out of budget. Dortmund currently use their left back on the wings. Saka will probably wait to see what happens with Auba, Lacazette before taking a… Read more »

I think it was Lucassen, head of our youth development, who said Saka probably won’t make it as a top class winger, but has the potential to be a top fullback. Fullbacks are generally quite attacking these days anyway. Maybe he should be trying to make the most of any position in the 1st team, just like Lauren.

I also find Saka to have quite a simple game to be a pure winger. He is not as flamboyant as Pepe for example so I don’t think he will become a top class Winger. I see him in the same mould as Alaba and Davies on the left. He will not be the first to transition from winger to fullback, just see Bellerin and how he plays similarly to him.

Saka isn’t helping himself by playing hard ball, if he wants to develop into a great player then he should believe and work as part of a team instead of trying to pick and choose positions and place for now (he’s still very young and there’s going to be a lot of time for him to grow in whatever position he’s best in). Now is the time to sit tight and work hard, not play superstar.

I will die being a fan

Being a player, I can’t even imagine what could do.

I want this to work badly.COYG!

If there were titles and trophies given for saying exactly the right thing, under Arteta we’d be champions of the world, and nobody would be anywhere near us (maybe Klopp’s Liverpool or Pep’s Man City would be our nearest challengers). However, we still have to ACTUALLY do it. I have full faith that we will under Mikel and, with my entire being, I hope I’m not wrong. Now, playing staff, it’s up to you.

The attitude of never needing to convince a player to come to Arsenal is music to my ears. Arteta is going to be brilliant for our club. He really gets it.

It’s a nice sentiment, and one the fans would love to hear, but I feel it’s a bit naive. In an ideal world we wouldn’t need to convince players to come here vs elsewhere, but in reality it’s a very competitive market for the best players and they’ll want to be part of the best projects out there. I don’t think we got/kept any of the best players in our history simply for being Arsenal, they had to be convinced about the project, the direction of the club and how they fit in personally. Those little differences that matter as… Read more »