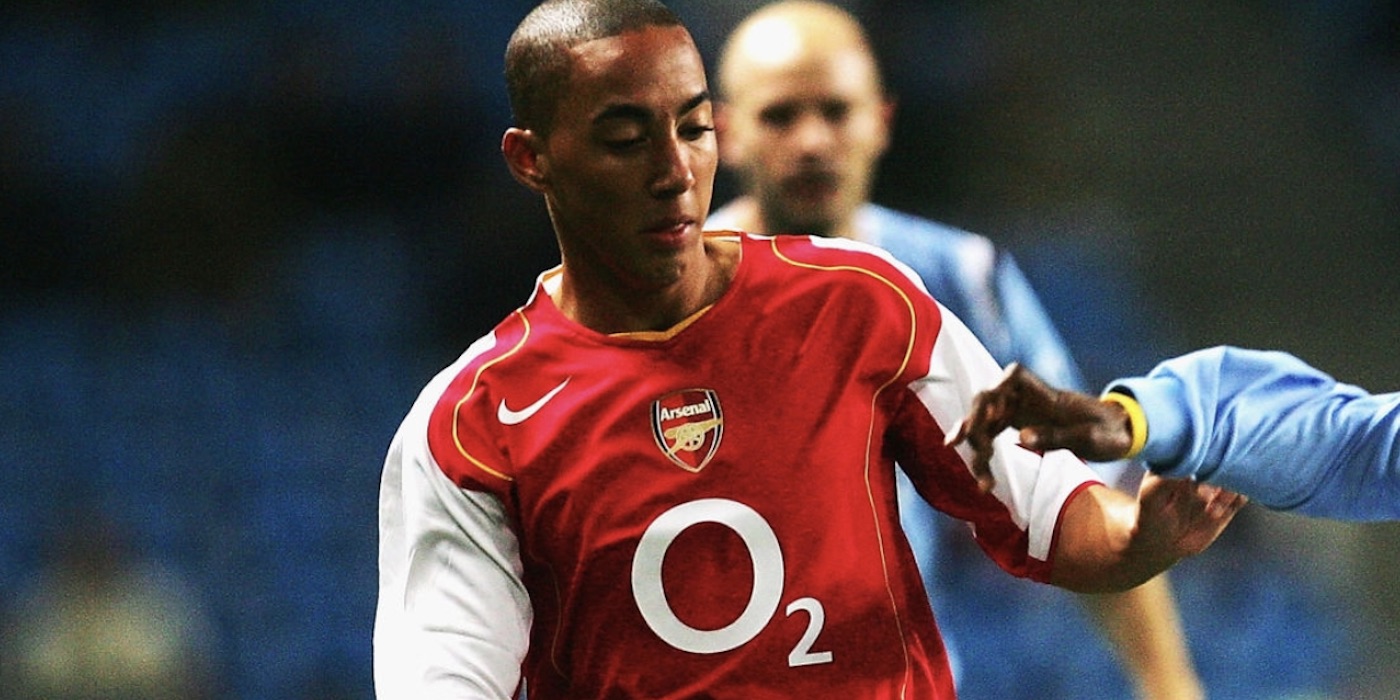 Arsenal vs Rotherham in the League Cup, October 2003. A minor game on paper but one that’s gone down in history as the night Cesc Fabregas made his debut and became the youngest ever player to appear for the club in the process. Yet for Ryan Smith – the second youngest player to play that night – the game was even more special, as he got to appear for his boyhood club at Highbury.

“Honestly a dream come true,” is how Smith reflects on that game. “It’s funny because not too long before that, I’m there cheering as a fan. It was a surreal experience. Any player that makes their debut for any club, it’s a special feeling but for me being from the Borough, being a local boy…there’s nothing that can beat that.”

When Arsene Wenger gave Smith the nod on 73 minutes to come on and replace Jerome Thomas, Arsenal led 1-0 but a late equaliser from Darren Byfield sent the game to extra time, and eventually a shoot-out that finished 9-8. “It went to penalties, I took one and luckily put it away. It was just a crazy game,” he laughs.

His day had begun with a good omen: a fortuitous encounter with club legend, Charlie George. “I was making my way to the stadium and as I’ve come out the house, cos he lived on the same road as us, by chance he was there,” Smith remembers. “He said, ‘Good luck. I’ll be there and I wish you all the best.’ It was a lovely experience.”

Originally at West Ham’s academy as a boy, Smith joined Arsenal when a local coach alerted Liam Brady to his talents. Growing up in Islington and moving to the club he supported was obviously a huge deal for the youngster. “For me it was almost like I was overawed to be honest, when I first joined. It was just a special time. I remember meeting Liam for the first time and him talking to us about the values of the club. It definitely set the tone.”

Among Smith’s age group was a talented pool of players, several of whom found success elsewhere. “To begin with we had Mark Noble, he was a top player when I joined. In ’98 I remember Aiden McGeady actually came with us, we played a tournament in Paris at the Parc des Princes. Funnily enough Mark Wright from TOWIE, he played with us as well! And Jamie O’Hara. We had a decent cluster of players that went on to do things. It was a good team.”

It was not long before Smith, a skilful and rapid winger, began to impress the coaches at Arsenal and the transition from youth player to first team happened quicker than he expected. “I didn’t assume that it would happen in the first year, but it’s kind of crazy,” he says.

“We started out playing Under 17s and then did really well in the first couple of games. I remember one game I scored and assisted and at half-time they said, ‘Now you go and play for the 19s’. Everyone was looking at me like, ‘Oh my God’. So I walked across to the other pitch, played the second half with the 19s and scored in that game…I just felt everything was clicking.”

“Another 19s game, I think I scored again and then I played a Reserves game. This happened all within the space of a couple of weeks. I started playing for the Reserves, came on a couple of times and then I started from there on in.”

The day that he got called up to the First Team was also his first encounter with Fabregas, who became one of his closest friends at the club. “Cesc had joined the club and I wasn’t aware. We were meant to have a day off but they’d called me in and said, ‘No you need to come back in tomorrow’. I was like, ‘That’s weird – everyone else was off’.”

“I’ve come in and gone in the changing room and Cesc is in there. I’m like, ‘Hi, my name is Ryan’, but he can’t really speak English, so we’re just doing hand gestures and trying to figure out what’s going on! Eventually Liam came to the changing room and was like, ‘Right. You guys are both training with the first team’. I thought ‘Oh my God’, cos they’re my heroes. We went out there and we both gave a really good account of ourselves, and I think that’s what helped propel us to the first team quick.”

Having shared these formative experiences together, Smith and Fabregas maintained a strong bond. “To this day, we’re still friends. He was a fantastic player. It’s hard to explain how good he was as a youngster. His maturity on the ball, his awareness. I haven’t seen anyone else like that, and I’ve played with some very good players, but he was just from another planet.”

“He was super chilled and he showed that in the training session as well. He did really well and I think he gave a few of the boys in his position a bit of the runaround. Just a very special player.”

However, while Fabregas went on to become a regular, Smith’s trajectory was curtailed by a terrible injury in a Reserves game against Ipswich in February 2004. “I remember I picked the ball up and started running at a player and knocked it past him. This other player, from literally nowhere, just came out and two-footed into my knee when it was planted. A really high tackle. My cruciate was ruptured, my cartilage was gone so it was just bone on bone for the rest of my career.”

Gary Lewin’s prognosis was bittersweet: Smith would play again but have to retire in about 10 years. He did make a recovery, and played some League Cup games the following season but the scare of the first injury meant he was never quite the same player. He enjoyed a spell on loan at Leicester – that included a memorable 3-2 victory over Spurs in the FA Cup – but he found himself further down the pecking order back at Arsenal.

His final game in an Arsenal shirt was in Dennis Bergkamp’s testimonial, the first at the Emirates Stadium. Bergkamp was Smith’s favourite player growing up and it was a fitting way for him to say goodbye to his boyhood team. “A special talent and a special guy,” he says. “Not many people can say they’ve played in Dennis Bergkamp’s testimonial, with such an array of talent from past and present.”

Signing for Derby in 2006, Smith played for several clubs in the Football League but could never find quite the right fit for the playing style he had grown up with at Arsenal. Often at the mercy of the managerial merry-go-round that meant change was common and disruptive, he also had to factor in the long-term effects of injury and surgery.

“If I’m being honest, once I got to about 70 minutes, my knee was hanging off but I couldn’t tell them my knee’s really, really hurting otherwise they’d just be like, ‘We’ve got to get rid of you’,” he reflects. “It was just a really tough period in my life in football.”

Smith found an outlet from a surprising destination: America. He put his scepticism about MLS aside when Kansas City Wizards manager Peter Vermes flew out to England to speak to him personally and convince him to sign. “It was a great decision. I really enjoyed it,” he says of his time there. “They try to emulate how top teams play in Europe. They pass the ball, they work hard. It suited me right down to the ground and that’s why I did well there.”

After a successful season in Kansas City where he finished as the team’s top assist maker, Smith was offered a trial back in Europe at Real Zaragoza and travelled there for a medical. However, he was unable to negotiate a move away from MLS and ended up signing for Chivas USA in Los Angeles instead. “I had a really good time,” he says. “I became good friends with Juan Pablo Angel, and a few other guys there.”

Still only 26, Smith then signed for Greek club Skoda Xanthi for a short spell before retiring from football. “After finishing playing in Greece for six months, I just called it a day. I just couldn’t play no more, with the knee issues and seven surgeries.”

Although Lewin’s prediction had sadly proven correct, Smith wanted to stay working within football and after several years in sports media, he has recently decided to become an agent. “It’s tough because there’s a lot of people who can do it,” he explains. “There’s no limit, it’s kind of a saturated industry. I think when you have certain virtues and you do things properly, then no matter what, you’ll go far – as opposed to using it to make a quick buck.”

His main client is Yannick Bolasie, who he recently helped seal a loan move to Sporting Lisbon, but Smith is also involved in supporting younger players earlier on in their careers. Given his own experience of being in the spotlight from an early age, he is well-placed to help them cope with the pressure that comes with being a professional footballer.

“I think with a lot of advisers, they would have a business degree or whatever, but they don’t have that first hand experience which is what I’ve got. I’ve seen the highs and the lows so I reckon that kind of advice for a player is invaluable,” he says.

“Business is business at the end of the day, but having been there and done it, that counts for a lot more I would say.”

Ryan always seemed like a really genuine guy when i’ve read articles and watched interviews, he articulates himself really well. He lived the dream 100’s of millions would love to have lived, but of course a shame it came to an end so soon. I wonder how many other careers in the UK have ended prematurely due to the sometimes thuggish nature of football in this country.

I played against Ryan at school, he megged twice in the same game I couldn’t get near him.

Though unrelated to topic, how are spurs going to repay the debt? or will they go bankrupt?

How does this fit in with Arseblog’s “all agents are scum” view?

Not exactly consistent in your opinions, are you.

Lovely article. Thank you Arseblog for keeping us informed.

The player who ruined his career should be made to compensate him. Fuck that guy.