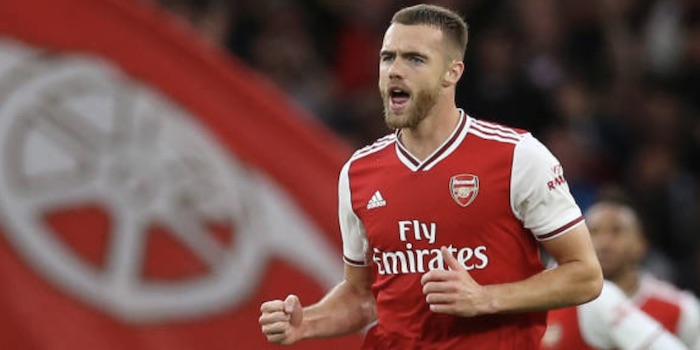 As Arsenal’s players edge closer to a return to training, there’s one player who definitely won’t be joining them for a while longer. With everything that is going on, it’s easy to forget that Calum Chambers is recovering from ACL surgery and that he’s not expected to be back on the pitch for a few more months.

The Gunners have had a number of players suffer bad knee ligament damage in the last few years.

Rob Holding, Hector Bellerin and Jordan Nobbs have all made comebacks following extensive and gruelling rehab, while Danielle Carter went through the same process just to suffer the same injury again in her first game back.

Chambers was two and a half months into his recovery programme when the club went into lockdown following Mikel Arteta’s positive diagnosis for Covid-19. With London Colney shut and social distancing rules in place, he and the medical team have had to adapt his daily sessions, which he’s been conducting at home.

In a chat with the club’s fans on Facebook, the centre-back paid homage to the medical team who’ve been trying to keep him motivated via video calls.

“The surgery went well and in term of recovery I’m just cracking on with what I can do at home,” he said.

“I am lucky enough to have some gym equipment here so I’ve been working on my strength in my leg, my knee and my quad. It’s all about building up strength in the quad to then hopefully progress onto more stuff.

“It has just been about adapting to the situation we’re in and finding things I can do at home to keep myself going. The guys have been great on FaceTime and Zoom every other day. They spend three hours at a time on FaceTime talking and walking me through each session, so credit to them. Without them it would have been a real struggle so they’ve been really good for me.

“At the start it was, ‘Let’s stick to these times, keep the routine going’ but as it’s progressed they’ve allowed me to have a lie-in here and there, which has been nice.

“We’ve been trying to stick to morning rehab, so on some days at the moment I have double sessions where I’ll do stuff in the morning and in the afternoon. It’s all about keeping a routine and keeping that momentum going.

“To be honest, [not putting a timeframe on my comeback] is one of the first things I said when I started the rehab. I don’t want to put a timescale on anything. I want to make sure it’s right, take my time on it and make sure I do it properly.

“In my head I haven’t even put a date on it, put a timescale on it, it’s just doing everything you can in the moment to get the best out of the situation. Hopefully it all just builds and progresses from there. I’m just trying to get through different phases and different blocks as and when I can.”

While it’s great to hear the club’s physios have been helping Chambers on a day-to-day basis, we can only imagine how difficult it must be trying to recover from such a serious injury while home alone.

“No, no [I’ve not been to London Colney yet] I’ve just been doing stuff at home,” he clarified.

“For what I need right now I have got all the facilities at home so I have just been staying here and doing what I can here. I think if it got to a point where I needed to go in I could potentially go in but at the moment I’m just cracking on with what I have here as that’s good for now.”

On the plus side, with a delay to the start of next season looking very likely, he can at least take some heart from the fact he won’t be missing quite as much of it on the sidelines. We hope the rest of his recovery goes well.

Arsenal hoping Auba and Gabi are fit for Chelsea clash

Good luck Calum. Good timing given the pandemic (is the best I can say).

Hope to see you on the pitch sooner than later.

Just as you were almost niggling your to the starting 11 disaster struck. Here’s to a quick recovery and may be one lust opportunity to prove you. I have always believed there is something in there with Chambers

I would rather just seeing him playing.

In my eyes, this guy has been terribly unlucky. Our best CB in the pre-seasonprior to his Fulham loan, eventually their player of the season (starting at DM). Got injured right as he could make his mark under Arteta. Everyone’s excited for Saliba (make no mistatke, me too) and looking for external solutions, I’d just like this guy to stay healthy and be given a chance in proper string of gamesas I believe he has it all to be a very good defender.

Holding too, possibly more so.

Hope they both come through.

Yeah, I thought he was our best CB in the 2nd half of the season before the loan to Fulham as well

That loan was just inexplicable imo

Chambers isn’t a right back, he’s too slow, particularly over the first few metres.

He continually finds himself on the wrong side, then gives away silly free kicks and penalties.

I think he’s a good footballer, but more suited playing centrally for a side that sits deeper, he gets targeted on the halfway, with managers putting nimble speedsters up against him, he’s improved in the air, but he’s still very clumsy in the challenge.

Hopefully he recovers soon, and we can get a few quid in for him.