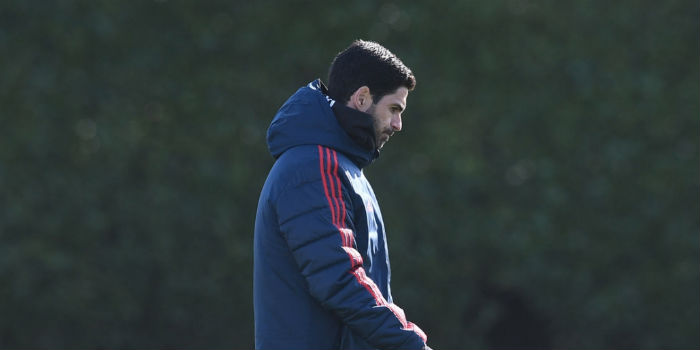 Arsenal’s first team squad will be allowed to take part in small group sessions from tomorrow afternoon after Premier League clubs voted unanimously in favour of the first step towards restarting the Premier League.

As we reported last week, Mikel Arteta’s squad and backroom staff will be tested for coronavirus twice weekly at London Colney for the foreseeable future.

Strict medical protocols will also be in place. Last week, the BBC, who’d seen a first draft of the proposals sent to players and managers, reported that sessions of no more than five players will be capped at 75-minutes.

Tackling and contact will be banned for the time being and everything from the pitches to the balls will be regularly disinfected. Players won’t be allowed to travel to the training ground together and congregation in communal areas including gyms and changing rooms will not be allowed.

A date for the completion of the outstanding 92 games of the 2019/20 season has not been confirmed, but it’s believed Saturday 20 June is looking likely. The league’s coaches had complained that starting a week earlier wouldn’t give them enough time to get their players up to full fitness.

In a statement released this afternoon, the Premier League said:

Premier League Shareholders today voted unanimously to return to small-group training from tomorrow afternoon, the first step towards restarting the Premier League, when safe to do so.

Step One of the Return to Training Protocol enables squads to train while maintaining social distancing. Contact training is not yet permitted.

This first stage has been agreed in consultation with players, managers, Premier League club doctors, independent experts and the Government.

Strict medical protocols of the highest standard will ensure everyone returns to training in the safest environment possible.

The health and wellbeing of all participants is the Premier League’s priority, and the safe return to training is a step-by-step process.

Full consultation will now continue with players, managers, clubs, the PFA and LMA as protocols for full-contact training are developed.

Arteta: I think this project is going to go bang

This season is just a huge disappointment. I have very little interest in what happens from now on. Even if we win the FA Cup, 2019-20 won’t be remembered for that at all.

In simpler times, the season would have been scrapped. Clubs only care about revenue, TV rights and multi-million wage bills. It’s rather disgraceful that we are looking for ways to carry on, but I guess these are the times we live in.

Spot on. The PL should watch that listless farce in Dortmund at the weekend.

I do agree that football has gone in an ugly direction, but there are surely quite a few clubs who will rely on revenues from the season being completed to survive It’s very difficult for any one club to say no to huge wages/rights/high ticket prices etc, as they’d basically be abandoning any hope of being competitive The only possible fix would have to come from the very top – Fifa and the regional bodies – with a wage cap, ticket price cap etc and real FFP. But no chance of that, all you can do personally is make a… Read more »

A wage cap is immoral, and thankfully illegal, as restriction of trade is illegal. No government should ever be in a position to cap your earning potential, and no business or individual should ever pay anymore than 49% of their earnings to the treasury, and that should be the very top rate, you can definitely spend your own money, better than the government can spend it for you. Everyone’s a socialist, but curiously nobody seems keen on going onto the governments website, and donating more of their money to the treasury…. The more the players earn, the more they pay… Read more »

A wage cap is not immoral. It’s sensible.

Very difficult to implement, but doable.

An industry realising that it can’t continue to operate without some changes after just a few weeks of lockdown is not.

Sorry Blogs you’re wrong on this one. Interference in a functional market (yes they get an obscene amount but that is the market clearing amount for better or worse) is almost never a good a idea. It is worth noting that proponents of wage caps are almost always unaffected by the proposed.cap.

I think you’ll find most businesses can’t operate within a few weeks of lockdown. Outside of your Apple’s, Amazon, Microsoft ect, virtually all businesses are reliant on cash flow Without that cash flow business can’t pay it’s overheads, and it start to drown. Wage caps are immoral, if you start a business? And you create wealth? Why do you think it’s fair for the government to come into your business, and then dictate to you how you allocate your money? You’re opening up a whole can of worms, and that type of state control is immoral As is taking more… Read more »

Any society that creates an environment where individuals can have billions in personal wealth is immoral. Especially when they don’t pay their taxes, which is most of them.

You or I wouldn’t get away with it, but they use their wealth to do exactly like, while people suffer with poverty.

Cheerleadering for billionaires, take a good look at yourself.

Blogs I agree tax avoidance is a big problem, even though I stand by you should never pay more than 49% of your earnings to the treasury. But your assumption that all billionaires are bad, all billionaires don’t pay tax, and all billionaires pay for political influence, simply isn’t true. Some simply don’t pay tax because they donate all their money, most of the very rich ones will give away 99% of their money when they die. Also no tax can be misleading, companies invest back into their business with profits and pay dividends to shareholders. Look at Arsenal, we… Read more »

Cut the size of government. Then talk about taxes. Governments are corrupt

The British will never come out of lockdown. Victims of fake news. Love of government “wisdom” and blind obedience is not a good thing.
Let’s get on with life!
PS Billionaires don’t stay billionaires forever, the get relegated and promoted as well.
I am sure Kroenke won’t let us go into administration either…maybe use the Emirates to build his wife’s next Walmart???)

Woah, there Wage caps for multi-millionaires have literally nothing to do with free will/speech/expression etc. Let alone quality of life, which doesn’t seem to feature in your understanding of freedom There may be a history of communist governments, installed into power through war and revolution, who have stomped on personal freedoms. But there is no reason why some Marxist economic policies, brought about by democracy and reform, would do the same – the opposite in fact. Sweden, Norway, Finland, Denmark and Iceland feature in the top 10 of every population happiness survey, have strong economies, low crime rates and stable… Read more »

The reason wages are being pushed to the floor is the free movement of people, and the 1.5 million illegal workers in this country. Its basic economics, supply and demand, oversupply of unskilled labour and trades people pushes down wages and working conditions, as does illegal workers being paid cash, it also gives no incentive for British business to invest in the work force. Its the same with housing, oversupply of people and under supply of housing, pushes up rents and house prices, and major City’s end up putting in congestion charges, leaving driving and mobility just for the rich.… Read more »

Ah, Rich. Always on about freedumb.

In simpler times we’d all be living in caves, hunting for our food, and washing in rivers…,, We need to get people in the non vulnerable demographics back to work, because you can only have a public sector, providing you have a large enough private sector to pay for it, sectors like PL football for example, that bring huge wealth into this country. During this pandemic people have still expected our supermarkets and petrol stations to remain open, for our bins to be collected, for delivery drivers to keep delivering, public transport to run, and our health service workers to… Read more »

Rich, I could not agree more. You are spot on for both of your posts.

Ya Gooner
Reply to  LEFT08

The government found the money to bail out bankers but they can’t find the money to help it’s own citizens. If you’re really believe so much in the free market wouldn’t you agree that we should have let the banks fail? Everyone loves to shit on socialism but a stable country requiressocialist values as well as capitalist values. Socialism is not communism. The nhs is socialist, free education is socialist, a police force and fire service is socialist all of which benefits capitalism less than to the sum of its parts. It allows capitalism to flourish. They are 2 sides… Read more »

Ya Gooner
Reply to  Ya Gooner

More than the sum of its parts ffs*

Rich
Reply to  Ya Gooner

It was Brown + Blair who bailed out the banks, and left a deficit that was the largest in the developed world for the Tories and Lib Dem’s to pick up the mess. The only reason we’ve been able to borrow on the market at low rates-is because the Tories and Lib Dems cut the deficit from £156 billion that was 9.9% of GDP, down to under 2%. Its still too much, we spend more on debt interest than we do on education, and have run a deficit for 23 years straight. Those that were claiming austerity wasn’t necessary and… Read more »

Ya Gooner
Reply to  Rich

It was worldwide issue so blaming single governments is rediculous, you think if the tories were in charge they would let the banks fail? Also printing money to pay private debts also causes inflationary pressures. That was a balance the treasury had to maintain.

Again you seem to be confusing socialism with communism.

Rich
Reply to  Ya Gooner

If you don’t understand the difference between the deficit and the national debt? Then you might want to keep out of a conversation involving economics. The reason the national debt was at £1.8 trillion before Covid19, was because the yearly deficit was £156 billion in 2010. The same people who say austerity wasn’t necessary, are the same idiots who say the Tories can’t manage money, because they doubled the national debt, and both of those statements are in complete contradiction with each other. £156 billion was the 2010 equivalent of the entire health budget, the entire education budget, and 1/3… Read more »

Tackling and contact banned? That shouldn’t be a problem to adapt to.

Burnley will just be standing around their training pitch, looking at eachother and the ball, utterly bewildered

Some of them might even norice for the first time, that a ball is even involved in the sport they play.

“ Mikel Arteta’s squad and backroom staff will be tested “

Why would you test Mikel? I can tell you for sure that they will find antibodies for COVID-19 in his organism. The guy was sick from the virus, in the end…

Horrible year to be honest. Seems like Emery is managing 2020. Can they broadcast training? I am so football deprived, i ll watch that too.

Just a quick question.Has the PL decided how the fixtures will run once we get going again.