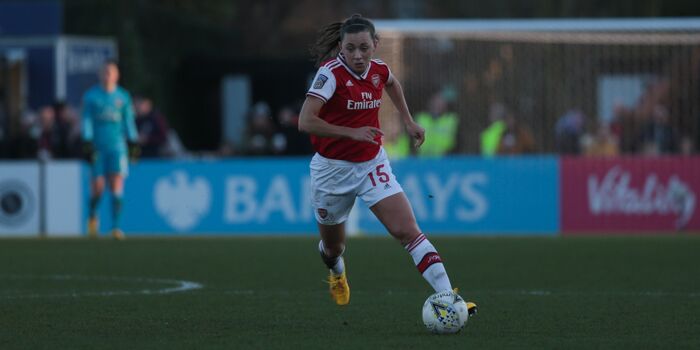 During Arsenal’s 2018-19 WSL title winning campaign, nobody played more minutes for the Gunners than Katie McCabe. The Ireland captain played a starring attacking role, her late winner against Birmingham last March was one of the most important interventions of the season. She also scored the day Arsenal secured the title at Brighton’s AMEX Stadium.

McCabe has been just as much a part of the Arsenal furniture this season, but this time at left-back. She had played plenty of football at full-back during her career prior to this campaign, but this season she has played nearly of her football there. Katie admits that it wasn’t necessarily part of the plan in pre-season.

“The first pre-season game against Wolfsburg in Austria, I played on the wing with Kat [Veje] at left-back,” she recalls. Veje injured her foot during pre-season, before aggravating the issue in October in her comeback game against Slavia Praha in the Champions League. “As the weeks went on and the season started, it [playing at left-back] just kind of happened,” Katie says. At this point, the plan changed.

“Once I had played a few games there, Joe and I had more of a chat about it, especially to clean up on the defensive aspects of my game, I do really enjoy playing at left-back and I started to feel at home there.” The 24-year old admits that had Katrine Veje remained fit, her role might have looked different. “Towards the end of last season we were playing with Kat at left-back and me on the left-wing. We had a very good understanding and it’s a shame we haven’t been able to build on that this season. It’s still a possibility when Kat comes back. Joe loves fluidity and having different options and we can give him that.”

Katie says it took her a few games to hit her stride in the position, which she managed through a mixture of game time and time with the coaching staff. “It took me a few games to adjust and feel comfortable, I needed a run of games and to make those little mistakes with my positioning from time to time. There are little things too like ‘how and where can I show for the ball to provide a better option for my teammates?’”

“I talked to the coaches and to Joe a lot about how I could improve and I felt better there really quickly. I’m the type of player that just wants to know what the coach wants from me and I’ll throw myself into it 100%.” It wasn’t just boss Joe Montemurro’s counsel McCabe sought. “I spoke to Mitch a lot, who has played there for her whole career. I had numerous conversations with Mitch and she really helped me out.

“Quite early in the season, myself and [assistant manager] Aaron D’Antino looked at lots of clips, especially looking at body positioning. I’m quick and strong, but I needed to improve my body shape in one-on-one situations, but as the games went on I felt better and better at left-back. I’ve got that aggressive streak in me, so I am suited to it. I’ve always been an aggressive player in terms of tackling and getting stuck in and when you’re a defender you need a bit of that!”

However, playing as a full-back in a Joe Montemurro side is a largely attacking occupation. Katie’s development at left-back is mirrored by Lisa Evans at right-back, who has spent most of her career as a winger. “The way we play is to dominate teams, we have a lot of the ball and attack so I very often find myself in that left-wing position. Me and Lisa are both attack minded players, so we do have to be mindful sometimes to not bomb forward at the same time. If she goes, sometimes I have to keep the balance and play a bit narrower to support the centre-halves and vice versa.

“But if we do both go forwards, you’ll see the number 6 just drop back between the centre-halves. We keep an eye on it and manage the game accordingly.” Montemurro allows his players to express themselves and make their own decisions when the team attack. During his first season in charge, Joe told me, “formations are for journalists. For us, it’s about the next line of pass.” McCabe says her and her teammate on the left-wing do work on moves on the training ground but also have plenty of latitude to make more spontaneous decisions.

“A lot of it is about appreciating what is happening and where players are in the moment,” Katie explains. “We don’t work on the basis that I always have to stay wide and that DvD or Beth has to cut in. Sometimes DvD will stay wide and I’ll arrive late in the pockets and we combine that way, Joe talks a lot about fluidity. We do work on little moves in training, but a lot of it is about going with what we see in the moment.”

When it comes to pressing opponents high up the pitch, there is a lot more choreography. The wide forwards, Mead and van de Donk, often trigger the press and McCabe has her part to play in that from full-back. “If DvD has a sniff and thinks she can pressure the ball, then I move up to support her and the team shifts around that, so the left centre-back might move over a little bit so I can squeeze up.

“We work on these triggers a lot to make sure we don’t leave gaps for the opposition to play through. I’m always naturally on the front foot when DvD is on the left wing because her pressing is unbelievable. It’s built on communication though, sometimes I’ll tell her we’re not in a position to press and she just drops in.”

Mead and van de Donk have been fixtures in the wide roles this season. Montemurro surprised Chelsea in the recent Conti Cup Final, playing van de Donk more centrally with Jordan Nobbs as an inside-left. It worked very well on the day, with McCabe consistently marauding down the Chelsea left wing. “I felt great in the build-up to the final against Chelsea and I felt dominant in that position, I was able to get forward into good positions and I was getting back better too,” she remembers.

“We had Caitlin [Foord] on the right wing that day and she holds her position and keeps the width on that side. With Jordan playing in that inside left role, it gave me such a clear channel to attack down the left. Jordan’s game is very much about linking up with Viv and DvD, my strength is keeping the width, being an option out there and getting balls in the box. It worked well even if the result didn’t go our way that day.

“Even when we were getting balls in the area and Chelsea were clearing them, we were in positions to get possession back straight away and start the second phase.” Katie plays as a left-winger for Ireland and she confesses it sometimes takes her a training session or two to readjust. “At left-back, when you get the ball you’re often moving forward into space. On the wing, sometimes you’re under pressure more quickly. When I join up with the national team, I have to readjust my mindset and say, “right, you’re a winger again now!”

Building partnerships with teammates is the mark of a top player and McCabe has been able to easily, as both a left-back and a left-winger. Some partnerships, she admits, are longer lasting than others. “I’m used to Jordan more as a central player, but I really enjoyed playing with her as an inside-left against Chelsea- I hope maybe we can see it again in the future, but I know Jordan wouldn’t be happy with that!”

Certain amount of irony here, methinks!
Katie picking Mitch’s brain about left-backing only then to keep her out of the team in that position even when fit to play to the extent where Mitch had to travel to the Spuds in order to get a game!
I do like Mitch and her Thunderbastard goals so now the Euros and Olympics have moved back a year or so can we have her back for a little bit of squad rotation please?

Great piece, as usual. Thanks.

RE Mitchell: She has qualities, to be sure, but she lacks the quicks and pace
that really good outside backs have. If Veje, who is a good player, ever gets
healthy again it will be interesting to see how Montemurro positions his side.