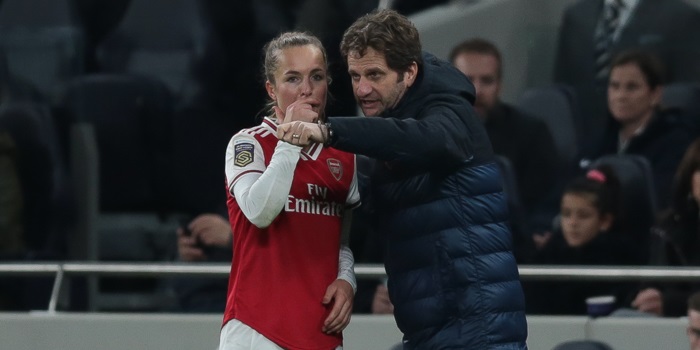 Arsenal Women manager Joe Montemurro says that the players’ feelings should be at the forefront of football’s plans to get itself up and running again. Arsenal Women haven’t played since February 29th due to the Covid-19 pandemic with little clarity as to when the WSL and women’s football might be able to start again.

Montemurro says player safety should be paramount in any plans, telling the London Evening Standard, “We know in some shape or form, when we do return, the virus will rear its head again and we need to go back to football knowing that when it does we’ve got the mechanisms to get it under control as quickly as possible,” said Montemurro, who remains in his native Melbourne, where he returned for family reasons in early March.

“We’ve got to have that safety in the back of our minds. The second thing is, we really should be asking the players if they feel safe going back. They’re the ones in the [physical] contact and in the spotlight. There’s a real urgency to get back to the routine of group training, but I’m not sure if they feel it’s right to get back playing. But I can’t speak for the group, each individual has their own take on whether it should start [and when].”

In an interview with Bluewin in her native Switzerland, midfielder Lia Walti says her preference would be for the season to be stopped, “Training for two months when you don’t know what for has been difficult. Spending thousands of pounds on tests that other people might need just to keep playing? I don’t know, football is a minor matter, health is the most important thing.

“For health reasons, I personally would prefer the season to be stopped.” Walti is currently living with teammate Caitlin Foord, she also reveals that her mother in Switzerland tested positive for the virus, while her father and sister displayed symptoms but weren’t tested. Gunners goalkeeper Pauline Peyraud-Magnin displayed symptoms of Covid in March, but also wasn’t tested to confirm.

I read that Joe interview and I hadn’t taken coming summer schedules in count when thinking what they should do with the rest of the season. Reality is that top international players could have summer tournaments in the next five years, so trying to play also through this summer might not be good idea. I live in a country where testing, tracing and isolating as virus mitigation tactics are in place and work (not perfectly but still). Our mens teams were all tested couple of weeks ago before returning to training. I can’t imagine that without those measures it is… Read more »

Yes I think you’re right, I doubt the resource exists for extensive testing in the WSL and I doubt the likes of Reading would want to take their women’s team out of furlough so they can play games behind closed doors when they have nothing to play for. But I also think the international calendar will drive it, they can’t have seasons over running, I reckon they’ll finish the season and go for PPG. Liverpool probably won’t go down because there are some other teams who will probably opt out of the WSL because they won’t want to fund a… Read more »

Can’t believe they didn’t get PPM tested 🙁
Waelti is right to be fair, much as we want to see football back.

I don’t think they could at the time, she caught it right at the start of the pandemic in Europe when she was playing for France. Colney was closed at the time.

In response to James on podcast, Asymptomatic means the persons fluids are clean and immune are strong enough to restrain Le virus without running into inflammation immediately unlike the guy who’s fluids are full of all sorts of crap food ingredients. It’s inflammatory ‘signs’ that we see as symptoms. Same way if your body restrains virus quick, you don’t need to get the chronic lung ‘inflammation’ aka Pneumonia