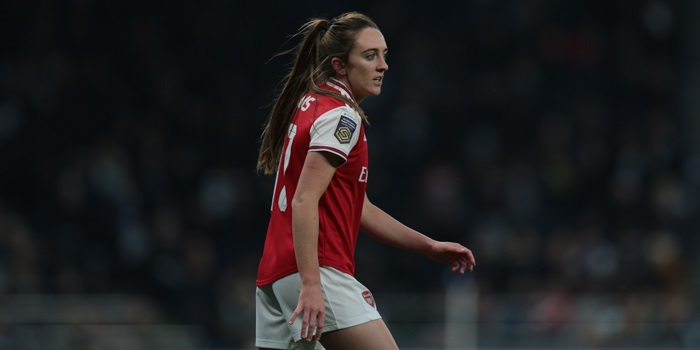 Arsenal are a fluid, shapeshifting composition under manager Joe Montemurro. With players like Vivianne Miedema, Kim Little, Jordan Nobbs, Danielle van de Donk, Caitlin Foord and Jill Roord at their disposal, opponents have a variety of attacking threats with which to contend. One constant to the attacking structure, however, is the sight of Lisa Evans scampering in behind an opposition left-back.

Interchanging comfortably between full-back and winger, the Scottish international is Arsenal’s roadrunner on the right, pulling defences apart like wet tissue paper with her runs from the flank. “We have a lot of number 10s who bring so much quality through the centre. The likes of Jordan and DvD really like to get into the area I try to bring something a bit different out wide,” Lisa explains. “I like being wide and creating space for our number 10s by stretching the pitch, but I also like making runs in behind the full-back.”

While the Gunners’ interchanging ballet of number 10s keep opponents occupied in the centre, Evans brings width and structure from her favourite outpost on the shoulder of the opposing left-back. “If I can pull the defender over to me, I know that can leave a space for someone like Jordan to run into the area.” This, Lisa suggests, creates a domino effect.

“If the defender wants to move over track Jordan or Kim or DvD, then that can leave space for someone like Viv in the centre. Teams see we have a lot of attackers and we like playing through the middle, if they try to block out the middle then sometimes the space is out wide.” And that’s where Evans comes in. Only Danielle van de Donk played more minutes than the Scottish international this season and it’s obvious to any regular Arsenal watcher what she brings to the party.

With 0.25 assists per 90 [courtesy of Statsbomb], only Vivianne Miedema delivers a killer final ball with greater regularity. “Joe really likes the wingers to be attacking the opposition full-backs, when I play on the wing, I like to try and get the ball very high up the pitch- especially when we’ve got players like Kim, Jordan and DvD who can slip those little passes through behind the full-back so I can get a cross or a cut-back. That aspect doesn’t really vary much whether I am playing on the wing or at full-back.”

Evans is very effective final phase player, coming alive when she glimpses the corridor of uncertainty between a full-back and centre-half. Only Mead and van de Donk make more passes into the penalty area per 90 than Lisa’s 1.88. 32% of those passes into the area are crosses. “We work a lot in training on the angles of runs and the timing of runs. It can depend who is playing and what the game plan is. When Beth is on the other flank, she likes to hold the width like I do, but if it’s DvD, she comes in-field more and creates an extra number in the centre.”

As Lisa outlines, coach Joe Montemurro usually has a distinct game plan for each opponent. Arsenal always play in the same, possession-based style but make a couple of moderations depending on each opponent’s defensive weaknesses. “Joe comes up with the game plan early in the week and we work on the areas that we think we can exploit in the opponents,” Lisa says.

“Sometimes that means attacking teams in wide areas, sometimes we’ll have a plan to have runners from midfield, sometimes we’ll bring one of the wide players in-field as more of a 10. We always have one, two or three clear points we try to work on during the week so we can play to our game plan.”

Montemurro is a tactically astute coach. I make an observation to Lisa that, in my experience, the language the players use has become notably technical since Joe took over in December 2018. The use of terms such as ‘low-block’ have become a staple of the post-match player interview. Lisa explains that the team have deliberately developed their own lexicon to aid understanding and togetherness.

“The language Joe uses brings clarity to what we are trying to do. He gets us on the same page and speaking the same language. It was one of the first things we did when he joined, not just with the tactics but with the psychologists, finding a common language for the team that we all relate to. You might hear us say ‘action, reaction’ a lot- it’s something Joe says all the time and a lot of people probably wouldn’t understand but we all really understand. It’s like our own language.”

Montemurro brought compatriot Aaron D’Antino into his coaching setup ahead of his first full season in charge. D’Antino had worked with Joe as a video analyst at Melbourne City. His input has further increased the players’ tactical fluency. “Most weeks I would sit with Aaron on the laptop and I would look at my individual clips, but we’ve also started looking at video in units too,” Evans points out.

“We do unit meetings- the defence, the midfield and the attack. I attend the defence and attack meetings, regardless of whether I’m playing full-back or on the wing. We look at where we should be, the moves we should make and how it ties in with how everyone else is moving. For the defence, we look at our positioning and perhaps where we’re going wrong, then we specifically bring that onto the training pitch to work on.”

This choreography at London Colney can pay spectacular dividends on the pitch at Meadow Park- we recount November’s 11-1 win over Bristol. Vivianne Miedema scored 6 goals and made another 4 that afternoon. “You saying that back just cracks me up,” Lisa interjects as I reel those numbers off again. “How is that even possible?!” Miedema broke a WSL record for direct goal involvements that day.

Evans had 5 direct goal involvements that afternoon herself- the second most direct goal involvements in WSL history. “They had a lot of key players missing, including their full-backs,” Lisa recalls. “They played with a back five and I really like playing against a back five because I think there are pockets of space in front of them and I think there’s often space between the centre-back and the wing-back and there is uncertainty about who is picking up.

“Because they were banked up a lot of our creative players had space in front of them to pick out passes and we knew their defence wasn’t the quickest. We knew we could get balls into the area and have runners off the shoulder. I was able to do that in the game and Viv played some amazing passes- I know she can pick those passes so I just kept making those runs between the full-back and centre-back. As a full-back myself I know how difficult those runs are to stop.”

Lisa averages 1.13 successful crosses per 90 in the WSL, comfortably the highest amount in the Arsenal squad. She will rarely be seen tossing the ball in from near the touchline, usually the ball is worked to her close to the by-line. However, Arsenal do occasionally tap into their longer range crossing ability. During February’s 3-2 victory away at Liverpool, all three goals came from crosses.

“That was the main feature of that game,” Evans remembers. “I remember the team-talk and it was all about how their full-backs can get dragged inside. We played Liverpool at home and Beth played ahead of me on the wing and I just remember their full-back coming in-field with Beth constantly and leaving me that space out wide for the second phase.” Evans suggests Arsenal have potential to enact this game plan when required.

“We don’t usually put a lot of crosses in, but we do have that in our armoury. We have Viv upfront but she spends a lot of time outside the area linking moves together, she’ll tell you she’s a number 10 but she’s definitely not!” she laughs. “Viv scores a lot of headers for her national team; I don’t think people know what a good header of the ball she is because we don’t really put high crosses in.”

Lisa had never really played at full-back before Montemurro fielded her there in early 2018. Now stopping crosses is a part of her job too. She says she still wants to improve in defending one-on-one situations. “In training I might be up against DvD or Beth who aren’t the type to take me on one-on-one. In truth, my pace helps me out a lot- when I’ve messed up positionally my pace bails me out. I’ve got good players around me in the right centre-back spot like Leah or Louise Quinn when she was here, telling me where I need to be.”

Evans will occasionally sample life on the left-hand side when the game calls for it, just to add some variety to proceedings. “I know how hard it is when I play full-back and a winger changes sides- you get a totally different challenge. We have a lot of freedom here to switch sides and it causes problems for the defender. If DvD is playing on the left and I’m on the right and we switch, their full-back has a totally different problem to deal with cos me and DvD are very different players.”

In a nutshell, Lisa’s importance to the Arsenal attack is illustrated in that final sentence. She brings clarity and structure to the shape of the attack; but she also brings diversity of threat. Hiding in plain sight on the shoulder of the opposition full-back she gives the opposition defence an unenviable riddle. Mark her closely and leave space for Arsenal’s fleet of attacking midfielders or [gulp!] Vivianne Miedema, or else leave her unattended and allow her to pick one of them out for herself.

Really interesting to read about, thanks for keeping up with the team, tim!

For me next year our wide areas will be the most facinating part of our game. As Lisa said, this is where the space is and will be. Every oposition will block the middle of the pitch, if you have Viv, Jord, Kim, Dvd attacking you from that space. Same time this year our wide areas were not effective enough to hurt oposition and make oposition more worried about wide spaces. 5 goals in the league from our widefowards is not good enough if we want to win stuff and not to put too much pressure on Viv. For me… Read more »

I like Leonie. On the right wing she is quick and has a good engine but at the moment, as Tim has eluded to before, she is a little lightweight to operate as a right back which I suspect is why she was not utilised against the more physical teams. I really hope that she has taken the opportunity of this enforced layoff to work on her physical strength. It has nothing to do with size, just watch DvD throwing her slight weight about, and maybe it is as much mental as physical but for the good of the team… Read more »