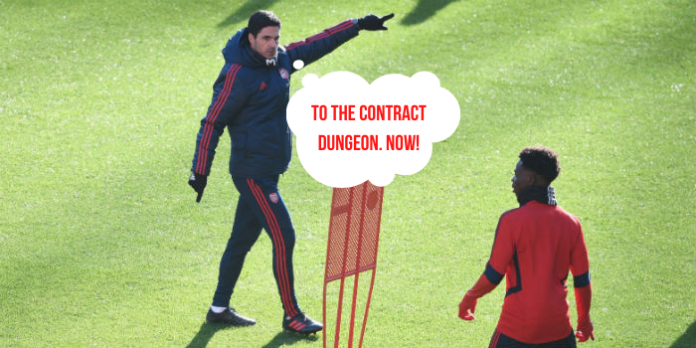 After months of negotiations, Mikel Arteta says he’s confident that Bukayo Saka will commit his long-term future to Arsenal soon.

The 18-year-old has enjoyed an outstanding season at the Emirates, breaking into the first team squad to become one of the first name’s on the team sheet. This season he has 10 assists and three goals in 32 appearances.

Out of contract in the summer of 2021, the club has been trying to tie down the versatile winger to a new deal for some time. However, with the player delivering on the pitch, his representatives have been happy to bide their time knowing full well his value has been increasing on a weekly basis.

“I am very positive that everything is going to be done with Bukayo very shortly,” Arteta told his pre-Southampton press conference on Tuesday.

“The communication between the club, agents and the family has been going on for months and is very fluent.

“The player and the family know how much trust I have in him and he’s just showing that every week. His consistency levels are getting better and better.

“I’m so excited by the young players we have, we just need the right environment around them to explode.

“Bukayo is doing that even in difficult circumstances which is even more merit for him.”

Having had our attention diverted by the need to secure a short-term loan agreement with Dani Ceballos and permanent deals with David Luiz, Cedric Soares and Pablo Mari our contract team can now return their focus to nailing down Saka and captain Pierre-Emerick Aubameyang.

It looks like a decision on any further squad additions will now wait until the end of the season when our financial situation will be clearer. Trying to second guess how much money we’ll have when we don’t know if we’ll be in Europe has proved very problematic for the club.

“At the moment, just to predict what is going to happen in the transfer window is impossible,” said Arteta.

“You can see one or two clubs doing these sorts of [big] deals, but the rest is really, really quiet.

“As I told you, we have to assess the financial situation that we have, and as well the results and where we finish in the season will dictate whether we have a narrow gap or a bigger gap to do any deals.

“I think we are going to have to wait another four to six weeks to see what we are able to do.”

“Enjoy the moment” – Arteta not concerned by Saka hype

I’ve even got my balls crossed for this one.

This is very good if it happens.

Stan, my man. Let’s give this executive team one more transfer window, and make sure they’re playing for the club, if they playing about with supper agents, and lining others pockets with unnecessary loan deals again then you need a rethink about structure, and start thinking about getting some Gooners on the board, and those that are there for the money out.

While you’re right that it would be nice to see what direction we are going, we are 4-5+ windows from being on the level of Liverpool and City. Add to the uncertainty from COVID and we unfortunately have to be patient.

Best news we’ve had in months (literally!) if true. I’d like to think Arteta would only publically say this if there was good reason for his confidence… although you never know with our wretched luck.

Good to hear some positive noise anyway. C’mon Arsenal, get it done.

They really better get this right! But if his agent isn’t Kia it might be more difficult.

This sounds really positive. Saka is in a great position, who would blame him, a big big fat contract coming his way. Can’t wait to back him for many years to come with Willock, Martinelli, Smith-Rowe & Nketiah.
Just need to promote some defenders from Youth set up, instead of talking about Luiz signing a 1 year extension.
This young group with Bellerin as Captain?

Oops forgot Nelson part of it as well

I love Bellerin as well but he has to be way more effective and consistent as a player to qualify TBH. He is a Walcott at the moment, we deserve at least a Ray Parlour.

To be fair to the Executive team ‘Salah’ might be a step too far for them.

The irony is that Salah (and Firmino and Mane) was gettable before Liverpool made him a superstar.

This would be even more important than signing up Aubameyang.

Agreed, I’m interested to see what clauses are placed within contract; buy out clause?
This guy is our shinning light from this rubbish season.

The brightest of our young starlets along with Martinelli.   I’d expect we should push Saka back into the wing next season and give Martinelli (along with Nketiah) a run up top with hopefully Laca one more season.   Would still prefer to see another creative force on the wing.   Pepe for all his goals (not that many) and assists does not do enough and conspires to lose the ball way too often.   Nelson shows potential but needs to improve.   To me, we need to be realistic about Ozil. He is an expensive luxury but a good… Read more »

20-30m for Sokratis…..i think you are lucky the length of your comments often blinds people to the utter nonsensepst of it is

‘Nonsense most of it is’

Seriously why do you keep repeating the same stuff about Emre Can? hes not signing for arsenal get over it. Ziyech has already agreed to join Chelsea. Get some new material.

Santori has been repeating the same stuff for years, but yet he words it each time like it is the first time he has told us. Very odd

This would be the best signing we could make

Imagine the entire fanbase pinging their hopes on a breakaway 18 year old to lead them to glory.

I hope Arsenal dosen’t run this lad to the ground like Wenger did with Wilshere.

What on earth are you talking about

Here’s another Wenger jibe. For Trump it’s still all about Obama and for a lot of AFTV bois it’s still Wenger.

FYI Wilshere played a lot in his breakthrough season – but are were way too many other issues with him that make him so injury prone.

And glory is subjective… Hoping he is with us for years doesn’t mean he turns into Messi.

Trolls like you waiting to turn every bit of silver lining into a gloomy cloud says a lot about Arsenal.

The only thing I blame Wenger for is making a team so good in the 2000s, when I was a kid growing up in Scotland, that i still support them through a decade of decline and American billionaire slow-rot miss-management.

Luiz is currently on 125k a week before the extension. It does me in how we didn’t channel some of that budget into a better package for Saka instead of extending him.

I like to think that Raul is more competent than it outwardly appears, and the reason there was an initial one year contract for Luiz is so that they could renegotiate a second year at a lower salary. And maybe that explains the uncertainty over the last few weeks. And maybe extra money to spice up Saka’s new contract.
But I’m an optimist/fantasist

Whilst obviously this is what we all want to hear, it saddens me that we cannot make this a no brainer for Saka.

I think Saka probably wants to stay, it’s the agents that want to get the most out of a deal, for him and them.