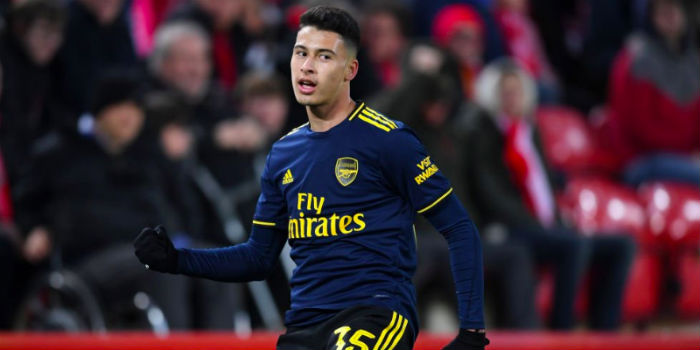 Mikel Arteta fears Arsenal will lose Gabriel Martinelli for a number of months after the Brazilian suffered a knee injury in training.

It’s reported the 18-year-old clashed knees with a teammate and could have suffered meniscus damage. While the full extent of the problem is yet to be confirmed, it does sound like we won’t see the youngster in an Arsenal shirt again this season.

Speaking ahead of Arsenal’s trip to Southampton, Arteta revealed: “We had some really bad news yesterday. In training in the last action, he [Martinelli] got hit by another player. He has damaged his knee.

“The doctors are assessing the extent of the injury but it’s not looking good at all. We don’t know [how long] but it’s looking like months.”

The boss was also asked what he puts the latest spate of injuries down to. In the space of a week, we’ve gone from having two players sidelined to the club’s weekly bulletin reporting on the status of nine squad members.

“Two players bang [into] each other [in Martinelli’s case], what happened with Pablo [Mari’s injury] on his own and a lot of others we’ve had recently are not muscular injuries, they are more traumatic injuries.

“Again, we’ve been really unlucky and we have to deal with it.”

Arteta’s battered and bruised squad head to St Mary’s on Thursday and then complete a run of four away games with an FA Cup quarter-final with Sheffield United on Sunday. If we lose any more players in the next few days we’ll be calling on Gunnersaurus.

Gutted! Fingers crossed for a remarkably fast recovery. We need Gabi firing on all cylinders!

Probably Mustafi and his dancing lessons.

Big loss……. but for some reason wasn’t getting a look in ….. strange club we support

The rumour is that he and Luiz were two to be quarantined and couldn’t train.

we need to sell the guy who killed him, I don’t even care who it is.

I’m a big believer in you make your own luck in life and as a club we seem to have far too much bad luck when it comes to injuries and pretty much everything else.

Wow! Didn’t know the players did any sort of physical training where they actually come together and play.

They play like a bunch of strangers every day.

Well, it’s good to know they’re bumping into eachother and getting injured on the training ground. I guess that’s where they play their best football.

I agree with you. They play their best football in training and then play rubbish in real match

Not muscular does NOT mean there are not underlying reasons for many of the injuries we get. We get far more injuries than what is normal, not only now after the restart to the Premier League. I think there may be something to what Rio Ferdinand said, that the training pitches are too hard. This is something he said after he had trained there himself! Joints, tendons and cartilage can become more suspect for injuries from everyday training on a hard ground.

I was looking forward to him having a good preseason! This is yet more shite news to digest!

To be honest, I’d play Gunnersaurus as a CB or CM at the moment. I’d even let him (is it a he?) choose.

Many of our better assets out for a spell. Looks like auto-pilot and coasting in to end of season.

Fights gone out of the team.

Some players may also be watching themselves and not fully commting with transfers in mind this summer (Auba, Ceballos, but maybe also Sokratis, Torreira)

Its what it is, a club which isn’t convincing of a CL spot at the moment and with most people looking in in doubt of our overall ambition or the ability of the rookie manager and Sanlehi to turn this around.

I hope being 18 years old means he will recover quickly from this injury.

Things are falling apart at a rate! Four injuries in a week. If things continue like this, the squad will be decimated in a fortnight.

Although this is a contact injury, I would just like to point out the dramatic improvement Darren Burgess had on our injury issues. He made the players more robust.

Why was he fired again?? This was never explained.

I expect he challenged the status quo, and was too abrasive for some of the higher-ups. It seems to me that if you’re non-playing staff at Arsenal you must fall in line or you’re out.

Probably trying to prove himself to get some playing time again and ends up getting hurt.

It’s never ever days or weeks with us and our injuries. It’s always months. Fuck. Our. Luck.