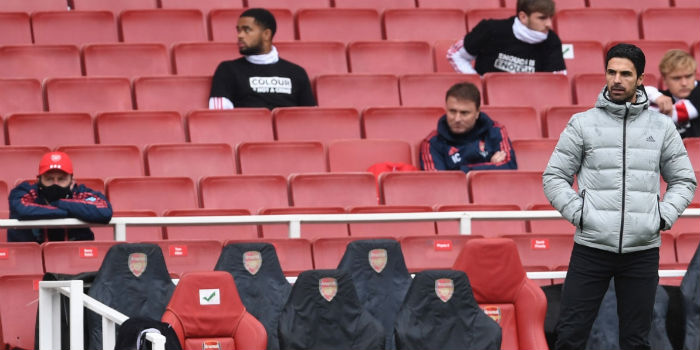 Mikel Arteta says Arsenal will look to claw their way into the Champions League game-by-game when the season resumes but he admits the odds are stacked against his side given the competition for a top four finish.

Despite going unbeaten in the Premier League since December, the Gunners head to Manchester City on Wednesday in ninth place in the table and with an eight-point deficit to make up on fourth-placed Chelsea.

Finishing fifth might see us sneak into the Champions League but it will depend on whether tomorrow night’s opponents lose their ongoing appeal against Uefa’s two-year ban from the competition. A decision is due to be reached in the first half of next month.

Well aware that Arsenal have been financially hamstrung by underperformance on the pitch, the boss made clear that he’s still hopeful of a miracle.

“The fact that we haven’t been in Europe [Champions League] for the last three seasons has put an enormous amount of pressure on the club in financial terms,” he said in his pre-game press conference.

“We know our responsibility, our aim and how much that [qualifying for the Champions League] will relax the financial situation we are. We have to go game by game.

“At the moment that is not achievable winning one game or winning two games. It’s more a long-term process in terms of the last 10, 11 games that we have.

“We have to go game by game, we know the target, the task and the difficulty of it because there are a lot of clubs involved in that fight. But we have to give it a go and believe that we can do it.”

A jaunt to Anfield aside, tomorrow’s game at City couldn’t really get any more difficult. And that’s before you take into account our record away from home against the big six.

Five years have now elapsed since Santi Cazorla and Olivier Giroud led us to a 2-0 win a the Etihad; a pitiable record that the boss is determined to change.

“We know how difficult it is to win away in the Premier League against any opponent and against the big six it’s even harder,” he said.

“A club like Arsenal can’t go that long without winning [away] you need to compete with the big four, five, six players in this country. We have to change that straight away. We want to win and that should be the mentality.

“That’s the way we will travel to Manchester even though we know they are difficult and how good they are. We’ll focus on what we can do and what we can control.”

Which stock should I buy?

The only crumb of comfort is that home advantage seems to have levelled off a bit with the new restrictions. This should help a team like us that commonly has a collective rectal prolapse away from home.

We will finish 4th. CL qualification in the bag.

We all wish that…but….

We will get Champ league thee negative fucker

We’re so going to capitulate.

If United (Sheffield, not the posers) win and we lose tomorrow it’s practically impossible anyway, so our tilt at the CL may be very short-lived indeed.

Honestly, I don’t care about European football anymore. I don’t even care if we don’t attract the big names due to it. I just want a team that plays well, and with heart. A team that’s coached properly and well.

The way I see it, we were facing an uphill battle prior to the world going down the drain at the Etihad anyway, so this situation is definitely to our benefit.

Plenty of games to go and opportunities for the lads to finish as high as possible.

It would be great to win tonight and finish the season strongly, but I’m not too bothered whether or not we qualify for the CL. We’re not good enough to compete in it and would only make up the numbers.

An FA Cup final is possible and would be a nice end to this campaign.

Don’t you feel that he talks more like AW these days? In a positive way though!

I believe MA is an upgraded version of an Arsene

Off topic but have any UK season ticket holders heard about this offer to get two free Sky games this season on Now?

It seems other clubs’ season ticket holders have been contacted directly by their clubs who have sent them the NOW TV codes to activate the offer. Nothing in my in-box from the Arsenal as yet 🙁

I’ve emailed the Club about it, will let you know how I get on.

Nope, nothing. Other clubs seems to have already emailed codes to ST holders or have registration deadlines that end this week. Doubt it’s something we’re getting.