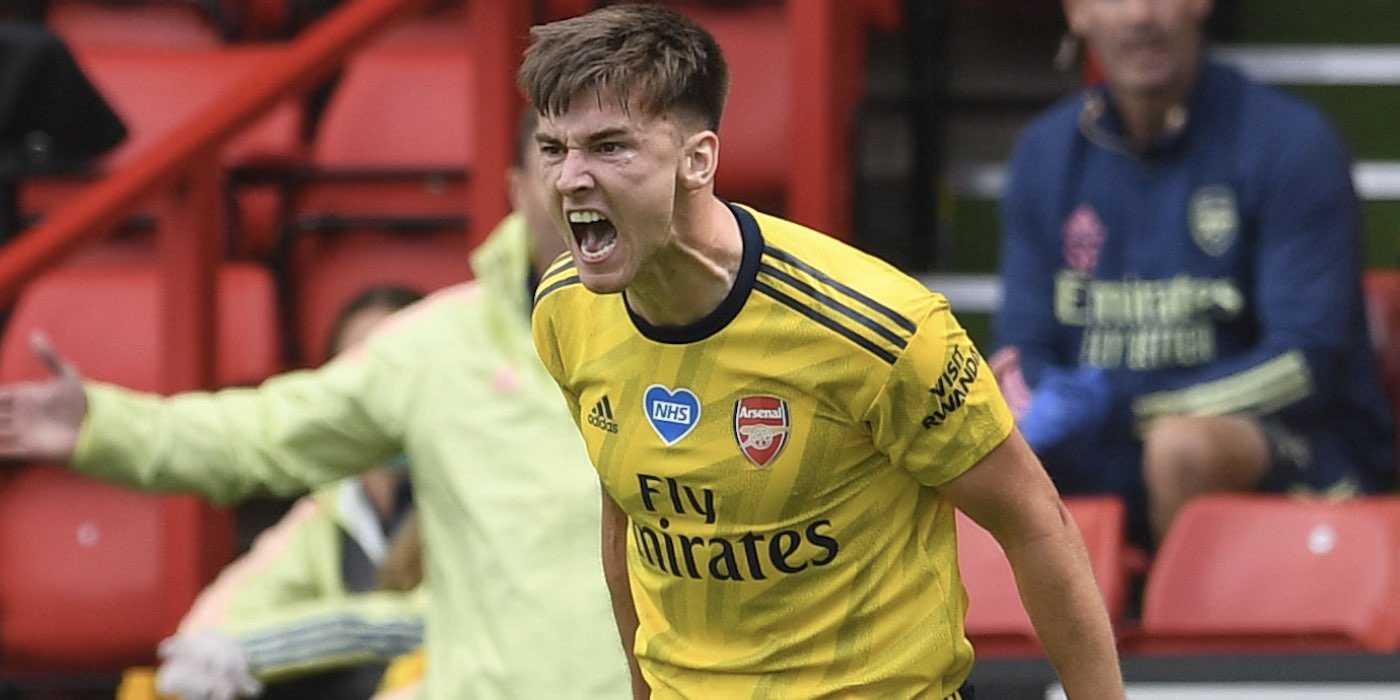 Having been full of praise for Kieran Tierney after the 2-1 win over Sheffield United in the FA Cup on Sunday, Mikel Arteta has again spoken about the quality of the left-back in the build-up to Wednesday’s Premier League clash with Norwich.

He revealed the Scotsman is now well settled into the club after his deadline day move from Celtic, and an unfortunate first season with a number of injury problems to contend with.

“He’s been one of the positive things since I joined,” said Arteta.

“He’s the kind of player that I love and I am really, really happy with him. He’s had some really tough moments since he joined the club but now he’s much happier and he’s settled.”

The Arsenal boss also had words for Dani Ceballos, although refused to be drawn on whether the on-loan Real Madrid mad was someone he’d like to sign on a permanent basis.

“I am really happy with the way Dani’s progressing,” he said. “I know how tough it is to come from Spain and join this league.

“As well, he had a really tricky injury while I was joining the club but I used him in different positions and his attitude is top. He loves football, he breathes for football and you can see that with every reaction on the pitch.

“Every time we score a goal, you look at him and it’s like he’s been here for six years, the way he feels about winning a football game.

“I love that about him.”

I really like the way Arteta expresses himself. He has no previous experience of being a head coach but somehow seems to know what is important and how to express it in any given scenario. Truly a sign of a sharp mind.

I like the patient job Arteta has been doing with the team not the lip service so many fans crave.

Tierney does seem to carry the air of aggression and reliability combined, that I don’t really get from any of our other players. Really only maybe Torreira, Leno and Martinelli seem to have similar mind-sets from what i just feel watching the games. Possibily Xhaka but he’s too error prone.

Shame that Ceballos hasn’t really worked. It’s weird because I’ve seen him with Spain or their under 21 team and he does’t put a foot wrong and runs games at times. As Arteta said one thing you can’t question is his passion, celebrates like mad when any one scores!

True, but I’m holding out judgement until we play an actual hard-pressing team. Xhaka’s biggest weakness is his mobility and one-footedness, and to Arteta’s credit he managed to mask this pre-lockdown by playing his as the proxy left centreback after starting a 4-2-3-1 with Torreira sweeping and AMN tucking into midfield. Then Ceballos came in for a bit but it was still a similar shape. Now that we’ve reverted to the sort of 4-3-3 / 3-4-3, he will have to be a lot better to offset high pressing teams. Wolves will be a massive test for him, even if Torreira… Read more »

I think Dani might have just come into a very unsettled team and could be a lot better under Arteta in a second season.

Two players one of having winning games mentality with talent and one with talent and experience of being around at top team, starting to see a proper left back in Kieran and lets get Dani a 4 year contract hes a strong Lad with awareness and once he beefs in a year or two will be immense..

Dani who ? you are the very 1st arsenal fan i came across who wants ceballos ! 40m for fidget ?? what u smoking bro.

We can do better than Dani for that money. Money we don’t have either. Also im sure he’s keen to play for real .

I would buy Dani Ceballos – but only for £15-£20million. I think he’s got the talent and the right attitude – and will continue to improve. He’s not a £40m footballer yet though.

Let’s get someone with Tierney’s attitude in every position!

So what’s the plan? Rob a bank or put a sniper on the Krankies?

Yeah, I like this lad. He and Hector, plus the ‘keepers, have an unenviable task of playing alongside the Comedy Gold Brothers. Let’s hope the situation changes for the better as soon as possible.

The unbelievable task will hopefully abate when we’re Holding Saliba!

Fullbacks look fragile though. Tierney, Kolasinac and bellerin all look injury prone. Bellerin’s back up Soares himself well injured and yet to feature.

Personally I was more impressed with AMN.

Again I mentioned before Arteta should stop wasting time trying to play him in midfield. We will not profit from his casualness there.

BUT he’s been at fullback for 4 seasons now. It is de facto his natural position and best stake for a spot in the team.

I thought he linked up well with Pepe who seemed to feed off of him and Laca. better.

Regards Tierney, I thought he did a good job against city as make shift Cback when Sideshowbob left the stage.

50-50 whether he’d be better instead of kolasinac on left of back 3 bc of lack of physicality and height.

Kolasinac in any case miscued only bc everyone’s favorite Holding completely missed a simple clearing header. but of course, same people prefer not to have seen this.

Would you take Dani on another year Loan? ideally not but could be very useful in a second season