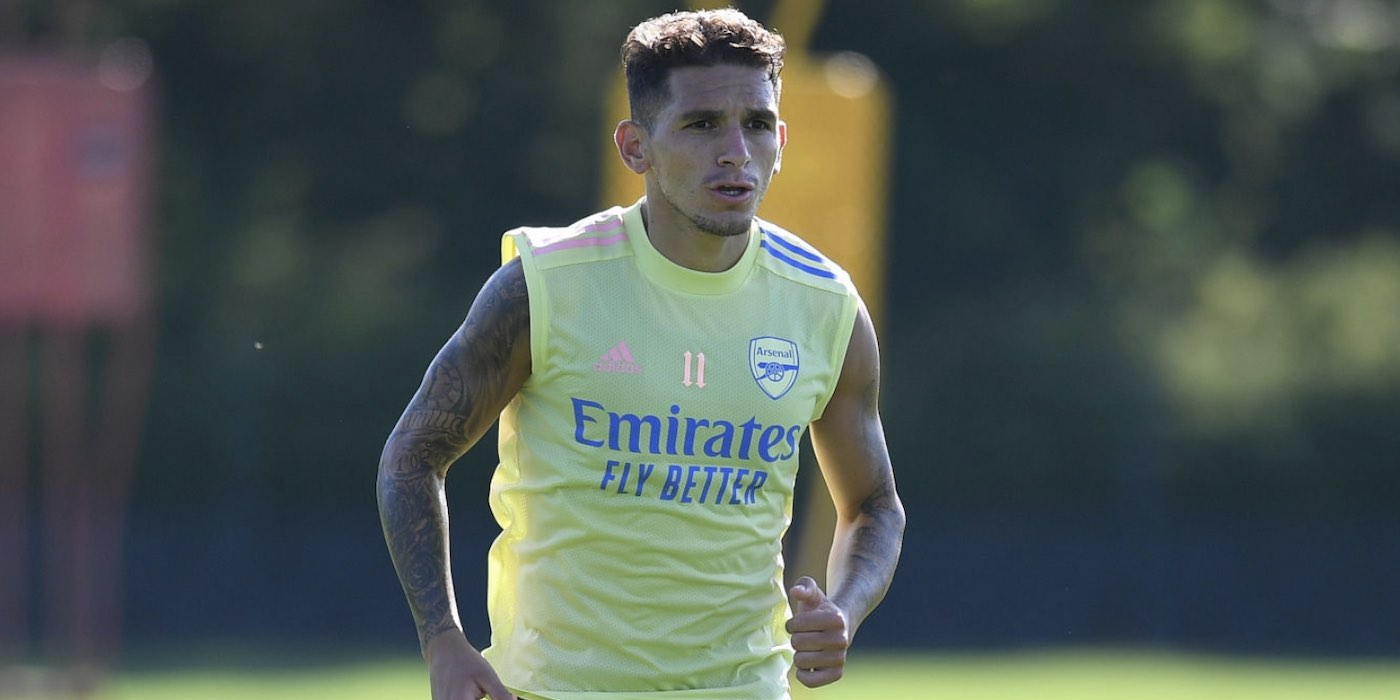 Mikel Arteta says that Lucas Torreira is close to making a return to first team action, but needs one more scan on his ankle to make sure everything is in order.

The Uruguayan international was injured in March during an FA Cup win over Portsmouth, suffering a broken ankle that should have seen him miss the rest of the season.

The three month spell without football due to the Covid-19 crisis means he could well feature before the campaign is out, but the club want to make sure everything is ok for him to play a competitive game.

“He needs to get another scan to make sure that the bone is completely healed before we expose him to the next level.

“But he’s been training really well, he’s been doing some parts with us and Lucas is so willing, has put in all the effort and more in every training session.

“Hopefully we can use him very soon.”

Another player on his way back from injury is Cedric Soares, who signed a four year deal with the club after his loan move from Southampton was extended beyond the June 30th deadline.

The Arsenal boss spent some time talking up his attacking prowess, saying, “He’s a different quality in the full-back area than what we have.

“He’s a gifted, technical player and is probably the best we have in the final third to make the right decision and attack the box as well.

“He can play in a four or a five, he’s a really good player with experience in the Premier League that can help us.”

He is in contention for a place in the squad for tomorrow night having been sidelined in recent weeks with a facial injury.

Cedric opens up on close relationship with fellow full-backs

Is he really the best we have in the final third? I know managers almost have to hype up their players but it feels a strangely specific thing to say

He’s a darn sight better than fucking Xhaka. His primary job is to win the ball and give it (in case you hadn’t noticed) but, in answer to your question about defensive midfielders in the final third, I will gladly refer you to his goal against those pitiful cunts up the Seven Sisters Road.

Best DM squad player from 9th position in the PL table to the bottom?

That’s because he’s been out injured, Mastermind.

Oh how quickly we forget. If you said this in his first 6 months people would either strongly agree or readily admit he has a strong case.

Pretty sure Martin was talking about Xhaka, which is what I responded to.

Martin was replying to Jacob, so he was talking about Torreira. ?Keep up!

Jacob….who wasn’t talking about Torriera at all you mean?
Maybe I’m wrong but seeing as Jacob was talking about Soares, I read Martin’s post as a response to yours criticising Xhaka.

Totally agree. One of the best players we have. The sooner we have him and Ozil back in that midfield, the better. Top drawer players.

Martin how can you comment on Arsenal games when you dont watch any games? You also said David Luiz is our best defender and he is doing great under Arteta? I suggest you stick to what you are good at, correcting everyone’s spelling. Specially the people who dont have english as their first language.

The best full back in the final third is what he said.

Agreed goonerink. Tierney’s decision making in final third is excellent. I wasn’t actually agreeing with what MA said, more pointing out what he actually said to those who decided not to actually read it before commenting.

yeah, and its telling what he said, clearly tierney is better imho, which might mean hes talking right sided, which is a blow for bellerin. ‘he is the best right sided attacking fb’ out of 2..

Read the article. He was talking about Soares.

Yes, I was quite surprised that my comment spawned an argument over Xhaka, but hey, its the internet.

I’m quite surprised with the comment that he makes better decisions in the final third than our other full backs. His attacking stats at Southampton are average/poor, I wouldn’t have thought he’s in any way superior to Bellerin who’s pretty smart with pull backs and passes in to the box, let alone Tierney on the other side.

Does beg the question tho, where does that leave Bellerin? Surely he has made his name as an attacking fullback because his defending isn’t much. Is he 2nd choice now? Available for transfer? Certainly seems like he finally has a fight on his hands for that spot in the team

Thank fuck for that. You’ve been sorely missed from this team, little fella. It will be great to see you back.

I really don’t get all the criticism for our signing of Soares…everyone always bemoans our lack of depth, yet when we finally make a signing addressing this (we haven’t had a real deputy right back in who knows how long), people complain that he’s not a superstar. We need players like him to sufficiently compete in the league and multiple cups throughout the season. This type of relatively inexpensive move, which we are not accustomed to given past transfer missteps, should be lauded – not criticized.

The general positivity 2 away wins in a row brings is quite something . Hope we continue like this forever.

Soares is a good player, and we need him, but what’s the point if he doesn’t play due to long term injuries.

Don’t get it either. On top of that, whenever I’ve watched him I thought he was good. Maybe he’s been on a downslope over the last year if Southampton fans don’t rate him. Time will tell I guess but I think he’s an upgrade on Bellerin. It seems more and more to me that public opinion is just formed on what is read or heard rather than observed

At this point players coming back is not that important anymore given our fixture list. We should hopefully beat Norwich tomorrow, but realistically I cant see us getting more than 2 points from the next 4 games after Norwich. I think Wolves will beat us at their ground, we will draw with Foxes and Spurs, and get beat by Liverpool.

Being out of Europe might not be as big of financial hit as normal (no one knows if games will be played behind closed doors) and will give Arteta more time during the week to work with the squad. It also should allow us to carry a smaller squad which should help hide some of the issues we have with genuine squad depth. As we move towards a younger squad missing out on Europe for a year might actually help us make a real push for the Champions League next year.

Yes, Chelsea had one year out of Europe and the next year they won the league. We wont need a big squad if we dont have to play in the Europa, which will save on the stupid salary we pay to the dead wood players. Might save us with a few long term injuries too. Then the following year we might hopefully break into the the top 4 again.

Yes – Chelsea & Leceister both won the league when out of Europe with Liverpool coming in 2nd (Suarez year). Not playing European football really helped each of those teams as it allowed them to get through the season with much smaller squads. We still need a few players but we hopefully will have enough quality in the first 11 to genuinely make a run at the top 4 next year.

I think one bonus to being out of Europe is that it allows us to focus on quality rather than quantity. We wouldn’t need 7/8 senior centre backs, for exams, so we could get 3/4 off the wage bill and reinvest that money in one top class prospect who would have a year to settle in the the club, like Soyuncü at Leicester last season

He’s good at certain things but not entirely the full answer either.   ….apart from height, he does not possess Santi’s control.   The height can also become an issue for us as well with teams that like to lob balls past our midfield. There is a reason why Granit was started ahead of him for BOTH Arteta and Emery. It was not due to injury alone.   Hopefully he can come in and be of some use till end of season. not entirely sure if he stays either as much in flux and he may be prey to a… Read more »