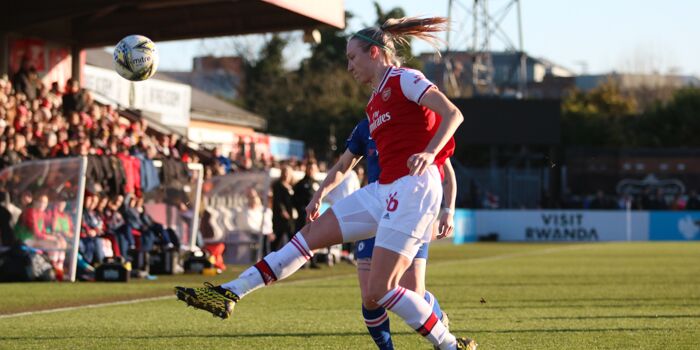 Arsenal defender Louise Quinn has left the club with her contract expiring this summer. Quinn was a big part of the 2018-19 WSL winning side, forming a formidable centre-half partnership with Leah Willamson. She also won the Continental Cup in 2018.

However, Quinn lost her place in the side when Arsenal signed Jen Beattie last summer and her appearances have been restricted ever since. The Irish international’s next club is not yet known.

Louise signed for Arsenal in 2017, initially on a short-term contract after her previous club, Notts County, folded suddenly on the eve of the Spring Series. Quinn signed a three-month deal with Arsenal and impressed enough to secure a longer term contract.

Among her highlights was a stoppage time winner in the 2018 FA Cup semi-final against Everton. Quinn follows Silvana Flores out of the club this summer, with a few other squad players to depart with their contracts also expiring. Arsenal are expected to add Swiss duo Noelle Maritz and Malin Gut this summer, with other incomings expected too.

I’m sorry to see her leave. Wishing her all the best for the future.

Probably the best solution for both sides, but still sad to see her leave. Her story is inspiring and she seems to be wonderful person. Same time games against Chelsea and Liverpool probably showed why her time at Arsenal was over. With Viki also in a limbo, we have to sign some quality backup CB also this season.

Very best wishes Mighty Quinn. Sad to see such a lovely person leave the Club.
The Flores departure is more of a surprise. Another young talent leaving for the States we are almost resigned to but to Chelski??
They must have offered her some inducement we were not prepared to.

Quinn played very well in the title-winning season two years ago, and I was
surprised she played so little this past year. A good player and good person
who will be a big asset for somebody soon. Wish her the best.