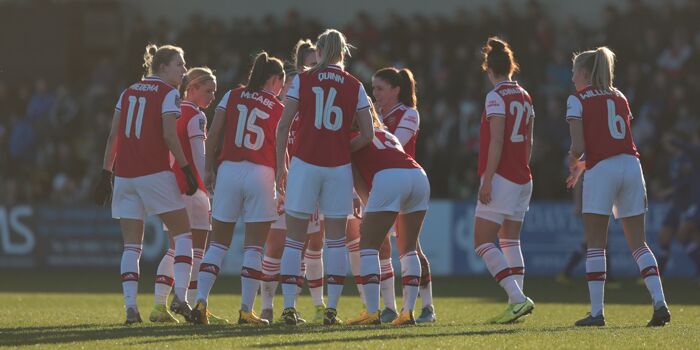 The FA board met on Thursday to discuss the resolution of the 2019-20 season, after the cancellation of the WSL campaign was confirmed last week. With WSL clubs still to play between seven and nine games to finish the season, the board met to discuss how to finalise the league standings.

They have agreed on a points per game model, which means that defending champions Arsenal finish in 3rd place due to their season average of 2.4 points per game, compared with Manchester City’s 2.5 and Chelsea’s 2.6. Chelsea and Manchester City will be entered into next season’s Champions League as a result. Liverpool, who finish bottom under the PPG model, will be relegated to the Women’s Championship, with Aston Villa promoted from the Championship in their place.

🏆 Congratulations to @ChelseaFCW, who have the best points-per-game ratio and win the title.

Along with @ManCity, they will represent #BarclaysFAWSL in the @UWCL next season. pic.twitter.com/rxftiVYkEd

As it stands, it means that Arsenal’s only chance of qualifying for next year’s Champions League rests on the prospect of them winning this season’s tournament, where they reached the quarter-final stage before the calendar was suspended due to the COVID-19 pandemic. They still have an outstanding two-legged tie with Paris Saint Germain to play.

No decision has been taken by UEFA as yet as to whether the Champions League will finish- that is expected to be decided at a meeting on June 17th. Of the other seven teams in the quarter-finals, PSG and Lyon have qualified for next season with Ligue 1 terminated and those teams declared as the top two. Barcelona and Atletico Madrid have qualified with La Liga terminated and those two teams declared as the top two.

Wolfsburg and Bayern Munich will finish their season normally, with the Frauen Bundesliga restarted (Wolfsburg top the table with Bayern in 2nd currently). Glasgow City are already qualified having won the SWPL- which runs to a summer schedule. This leaves Arsenal in a unique position of the remaining teams in the Champions League.

In the event that the Champions League is also terminated, Arsenal would potentially be able to make a solid representation that they be allowed into next season’s qualifying rounds, given that they would be the only team in Europe denied two viable qualification routes. The women’s Champions League is due to expand for the 2021-22 season with the top 3 from the WSL qualifying from next season.

Arsenal are also in the quarter-finals of the FA Cup with a home tie against Tottenham scheduled to take place. No decision has been taken yet on the status of this year’s competition, but there are suggestions that the remaining games might be held in August as a precursor to the 2020-21 season in September.

Now it is confirmed that the season will not be voided, Vivianne Miedema is confirmed as the WSL Golden Boot winner for a second consecutive season.

Predictable if disappointing outcome. It just confirms that with so few games in the WSL season you need to be more or less invincible in order to win it. Hardly seems fair on Liverpool since they still had 8 games to go and they could well have played themselves out of the relegation zone if they were given the opportunity. They did get a draw against Chelsea which is more than we did! I would have let them stay in WSL and allowed Villa in for next season. We have had odd numbers in the league before and it would… Read more »

It’s just disappointing all round. We went through a really bad patch where we lost to both Chelsea and City but we never had the chance to bounce back and claw back some points. At least Viv and VdD will be fit and fully rested for next season. Hopefully Carter too would be near full fitness. We need be in an all guns blazing situation next season if we are to win anything