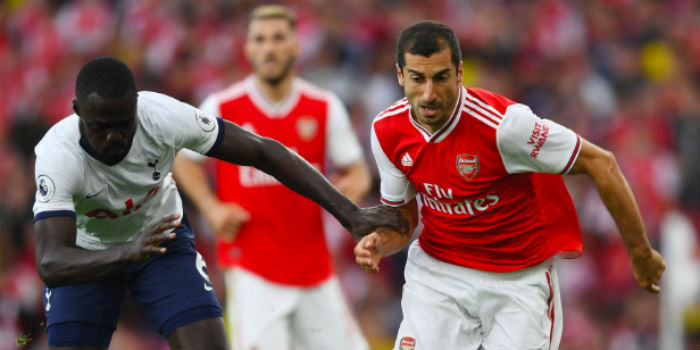 Henrikh Mkhitaryan has shed light on his relationship with agent Mino Raiola, admitting it can be difficult to work with the larger-than-life Italian.

The Armenia international has had a working relationship with Raiola dating back to his move from Shakhtar Donetsk to Borussia Dortmund in 2013.

In the last four years, the ‘super agent’ has helped broker his move to Manchester United, the swap deal that saw him trade places with Alexis Sanchez at Arsenal and September’s loan deal to AS Roma. He’s also likely to try and extend Mkhitaryan’s stay in the Italian capital one way or another in the coming months. More on that in a moment.

Speaking to Grant Wahl’s Futbol podcast, Mkhitaryan was didn’t hold back when asked what the Italian is like.

“The most important thing is that he’s doing his best to make the players happy. If the player is not happy, he’s not happy too. He wants always the player to be happy, it doesn’t matter if that’s on or off the pitch. If one of his players is unhappy at some club, he will find a solution to get you somewhere you’ll play or enjoy life and your football.

“There are situations where he’s very tough and it’s hard to work with him. But it’s normal, you know? He’s the best at his job and I appreciate him. I really enjoy working with him but he’s very tough as a person and as an agent. Of course, he has his bad sides too.”

He went on to laugh at the fact his agent sometimes goes weeks without calling him back.

“I’ve had times where I call him a few times and he won’t pick up his phone. He’ll then call me back after a month and he’ll ask ‘why don’t you call me, have you forgotten about me?’. I’ll reply, ‘Mino, I’ve called you a few times and you’re not picking your phone up.’ He’ll just say, ‘Yeah, but call me a third time, a fourth time.’ He always has an answer!”

Given he’s getting rich off Mkhitaryan’s talent, the man has a cheek. But perhaps you don’t get where you are if you pick up the phone every time someone calls.

Mkhitaryan also touched on his desire to stay at Roma, something he’s spoken about a lot recently. After six months of Arsene Wenger, Micki didn’t much like life under Unai Emery and it seems he’s not particularly eager to return to the Emirates. To be clear, he says he won’t complain if that does happen this summer.

“I don’t know how long I’m going to stay here,” he said. “I like Rome as a city and AS Roma as a club, I wish I could stay here longer but it’s not up to me. I’m doing my best, I’m training, I’m learning Italian to improve so let’s see what’s going to happen next.

“The club and the philosophy of the manager suits me. I’m very happy to play this type of football because it makes me feel pleasure, it makes me enjoy playing football. It’s the only reason, I guess.

“Of course, I’d like to be at Roma next season and not just next season, for another few years. I still have a contract with Arsenal, it’s not up to me. It’s up to Arsenal and Roma if they agree the terms of the transfer fee.

“My thinking is to play hard, to train hard and to look forward. If I’m not going to stay at Roma and have to go back to Arsenal, I’m not complaining. Football life changes so quick, you have to be ready to play wherever you are. If not in Roma, I’ll go back to Arsenal. If not that, I’ll stay here and play for Roma.”

It’s well worth listening to the full interview, which covers his language skills, his absence in Baku and being Armenia’s first superstar footballer.

Meh, it sounds like no one cares about this guy anymore, frankly.

Bro just fire him ffs. You aren’t married to him or anything

Tbf he did negotiate him a 3.5yr, £150+kpw contract at Arsenal as an already over the hill 29 year old

Also I’m not sure whether players can just switch agents as they feel? Not sure what the legal issues are here but I’d imagine most agents would do whatever they can to get round them

Would love to see how he does under Arteta to be honest.

I most definitely wouldn’t, and no words can describe how strongly I feel about that.

There’s no room for him.

The wide forward positions, are the one area of the pitch we’re looking good.

We’re in a terrible negotiating position, just accept whatever’s on the table, and move on.

Did you mean how he would disappoint Arteta?

Decent guy, got the worst time of Wenger’s decline and whatever that transitional thing under Emeri was. Hope he does well whether at Roma, Arsenal or anywhere else that funny agent takes him.

When he first came to Man U I thought he was excellent and I couldn’t believe our luck when we got him in a trade for a by that point spent Sanchez with a pissy attitude. It’s a great shame Mkhitaryan was also past his prime when he came to us because when he was good he would have been excellent for us.

My disinterest in Mkhitaryan aside, I’ve never understood why so many players seemingly allow their agents to wear the pants, as though they are the bosses? The players employ them, not the other way around.

They probably feel lucky they’re able to hire a guy that will bring them way more cash tha “non-superagent” would.

Imagine you’re organising a KISS concert. Technically you employ them but in practice they own you.

Eboue was prevented by FIFA from playing until he pays one million to an agent. That was the way his career ended. Who knows, same may happens to Kante who is in the court with a former agent. These guys get players who can’t read legal documents sign something then force them to pay. FIFA should impose a cap on money paid to an agent in a transfer. For me in 2020, that shouldn’t be more than 500K.

Another player we signed that wants to play for another team. Even if he comes back his head will not be at Arsenal 100%.
We need to sign, and play players who are 100% committed and love to play for us, for atleast 3-4 years. No more of this I have dream to play for barca, real, benfica, boca, Roma shit.

He’s 31.5 years old, on £140,000 a week, and playing him would likely block Martinelli’s development; so I think it’s time to say “ցտեսություն” (goodbye in Armenian, courtesy of google translator).

Has to be the in the top 10 list of most overated players of the decade.

Not true. He was a fine player before coming to England under Mourinho’s watch at Man U.

I’d be shocked if he was to come back to us, but it would be nice to see us get some decent money for him(15m ish?) Some of our recent business has been pretty embarrassing.

Embarrassing is putting it nicely. I would be surprised if we got more than 5 million for me.

You see us getting 15 mil for an over the hill 31yo that we’re looking to get rid of in a post covid market environment? The buying club also has to keep his wages in consideration for evaluating their total outlay for what will likely be his last big contract.
Although I share the hope, it just doesn’t seem very likely that we’ll get anything over 7-9m.