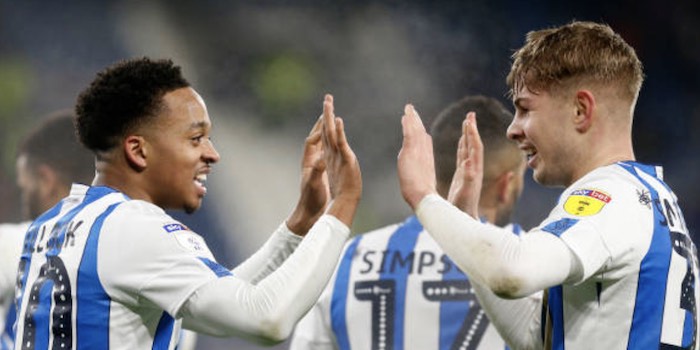 Emile Smith Rowe may have been on loan at Huddersfield Town since January but he’s still had one-on-one video analysis sessions with Mikel Arteta.

The Spaniard is known to have used the opening month of the Covid-19-enforced restrictions to hold tactical sessions with the Gunners first team.

It looks as though the process has been pretty inclusive with Smith Rowe confirming that the Spaniard has been passing on advice.

“We have kept in touch during lockdown and we have gone through some clips,” Smith Rowe revealed. “He has told me what I need to improve on.”

The 19-year-old also revealed the boss was fully supportive of him going on loan not long after his Premier League debut against Everton.

“He said that it is probably the best thing for me to go out.”

“When you see others playing you want to push yourself and get in that position as well.””

With three assists and a goal in 10 appearances since moving to the John Smith’s Stadium, the England under-21 international has made an immediate impact.

After a frustrating injury-hit loan with RB Leipzig last year, it’s a real positive. He admits, he’s enjoying himself under the tutelage of the Cowley brothers, Danny and Nicky.

“It is like a family here,” Smith Rowe said. “Danny has been amazing to me. He has taught me so much; Nicky as well. They have helped me every day.

“I watch clips with them before every game and it has definitely been different. I can’t thank them enough.”

Huddersfield faced Sheffield United in a friendly this week as they gear up for the Championship’s return on 20 June.

The Terriers have had a tough time of things this season and currently sit in 18th place in the table. They know they have to hit the ground running against high-flying Wigan in 11 days time if they are to ward off the threat of relegation.

For Smith Rowe, a strong finish to the season could well give him the platform he needs to stake a claim for a regular spot in the Gunners first team next season.

A manager who takes the time to watch video clips of a prospect on loan in the second division to personally deliver him advises from time to time is definitely one I can get behind with.

Long may Arteta continue *thumbs up

You’re absolutely right to praise him for this, but in my opinion it’s also something the manager should be expected to do. Even though he is still in the ‘hot prospect’ phase of his career, ESR is at the top of the group not already in the first team. Too often in the past Arsenal have ignored such players out on loan to our detriment. It’s good to hear we are changing this, and I think it’s the minimum we should have been doing for a long time.

All the managers do this.

And it is useful to put them out on loan to develop provided they find a team that fits and of course they have to show the aptitude.

Keeping a very select number of them around first team early in season for secondary competition and early stages of FA cup makes sense BUT is pointless if they get limited time and particularly if their inexperience is at detriment to us at business end of season.

Wish you all the best Rowe your the next big thing to save the bullets stolen in our big gun,,,big up!

Seems like Arteta sees a future in him.
I hope he can help Huddersfield awoid relegation and then come back to us as a regular
squadplayer.

Maybe replace Mesut at some point..

Despite what some think, attacking midfield has become a problem position for us. Even if Ozil was at the top of his game there’s still a serious lack of competition for that position in the squad and a total lack of goals from midfield. Smith-Rowe could be part of the solution.

I agree, we’re desperate for something different from midfield We restructured our wide positions last summer, with Nelson, Pepe, Saka, Martinelli, and with Tierney to come back, we now have fantastic direct pacy players, and real quality delivery from the wide areas. But outside of Willock and Smith-Rowe, none of our other midfield options look to get into the box. Ozil is a brilliant crosser of the ball, and fantastic in possession, but like Xhaka, Guendouzi and Ceballos, they all want the game played in front of them. Emery was slated for trying Torreira as a No8, but when you… Read more »

Problem is the reason he tried this is he did not like a short player in dm posistion, so his reasoning was all wrong in every possible way. He played LT out of posistion at the expence of Ozil and put a less
capable player in DM, It was mostly just stupid.

Emery tried Torreira out of position because outside of Willock, and Smith-Rowe who was injured, we simply don’t have any midfielders who travel with the ball, we don’t have No8 types who press, and who provide any type of goal threat. I like Torreira, but his size is a problem, he’s strategically fouled when he moves with the ball into space, where Willock lacks the experience and composure in deeper positions, but has the pace + power to accelerate away, and he’s got goals in his locker. If we don’t sign an attacking No8 this summer? I think we’ve got… Read more »

I think Torreira also has a similar problem to Kante when he plays 8 in that he’s very good chasing the ball but not nearly as good once he actually get it. Torreira can’t shoot in an advanced position he often end up doing little with the ball.   And IMO I think Willock could potentially do with a loan himself, somewhere where he can gain consistency and confidence on the ball. He has a lot of potential but also has a lot to learn, especially when it comes to holding onto the ball too long, seeing runners and weighing… Read more »

Yup agree, Willock needs solid playing time for all round development. He looks like the one stalling at the moment

Where has he been playing for Huddersfield regularly? Was supprised to see him deemed a cm by transfermarket

Never seen him play for Huddersfield tbh but ideally he’s been playing centrally, that seems to be where he’s heading long term.

Remember not so long ago it’s pretty much all we had in the squad, now look at us ?

Yep and many people seem to think that this is still the case!

Ozil needs competition. When he performed at his best he could easily have been replaced by Ramsey or further back in time Wilshere, Ox or Rosicky.