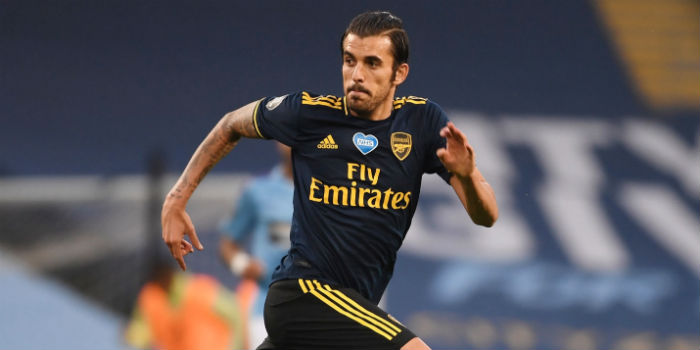 According to Marca, it’s looking unlikely that Dani Ceballos will wear an Arsenal shirt next season.

The Madrid-based publication claim (relayed by Sport Witness) the player has decided he’ll be better served playing his football in Spain next season and is open to a permanent move to Valencia.

The midfielder was pushing for a switch to the Mestalla in January but had a late change of heart when Mikel Arteta started giving him more game time.

There was talk when he joined on loan from Real Madrid that it could be a precursor to a permanent move. He certainly had us all hot under the collar following that August showing against Burnley.

However, having flirted with a Santi Cazorla to Denis Suarez range of performances over the last eleven months, he’s ended up being a tidy squad player but not the match-winner we craved. Granted, injuries haven’t helped his cause but there’s really very little to suggest we’d pay big cash to keep him this summer.

A one-year loan extension might be an option, but you can understand why the player might prefer to put down roots elsewhere.

In the very short-term, Arsenal are expected to confirm an agreement to extend his current deal past 30 June until the season ends. With Granit Xhaka injured last night, he may well get regular game time.

Hopefully being in the shop window will bring out the best in him.

Another rat leaving the sinking ship. Can’t say I blame him.

I think fair enough really. He is an alright player, but we’re only going to get the best out of him playing 3 in midfield, alongside 2 other dynamic tech heads like him. We just don’t have that profile of player at the club at the moment. Nor are we realistically going to sign some this window.

So probably makes sense to let him go back to Spain, he’ll look really good there.

How is he a rat? Came on a year long loan and has been the best midfielder (though bar is low) and his time is up. A rat could be someone who is under a massive contract and is only playing when in the mood not capable of playing against a top 6 side home or away.

It’s a figure of speech, you idiot. When rats leave a sinking ship, it’s an act of survival. Not because they are necessarily bad. I can’t believe I’m actually having to explain this to you.

It’s a stupid and unnecessary one. Add the name calling and you’re showing the kind of person you are…

You can shut up as well.

Oh dear. Did I offend you? I’m so awfully sorry. Do dry your tears. Do you need a safe space? Try the new Spurs stadium.

To be fair your mom must have stood in the way when papa ejaculated, cause I don’t believe you happened on purpose.

At my mother knew who’d fathered me.

At least my mother knew who’d fathered me.

Thanks for the explanation. Damn I will have to cancel my Mensa membership. As Father Jack said I’m so sorry.. Ozilites are so sensitive.

I like Mesut Ozil as a footballer, but you really have an unhealthy Freudian obsession with him don’t you, Mensa?

It disappoints me that we can’t get the best out of a player with such obvious talents. Everyone seems to regress when they come to us. Where is the next Overmars or Petit?

Where is the enxt Petit or Overmars?
Being signed by someone else is where they are..

Well what do you expect? Everyone throwing cartwheels and dancing out of Arsenal station like the chimney sweeps in ‘Mary Poppins’…? The club is in a fucking mess, in case you hadn’t noticed…..

Not an audacious player, a critical quality that young players need to succeed. That’s exactly the way I assess Nketiah as well. Eddie did not have the mindset to try and hurt Man City yesterday. Rooney was full of it at 16. Anelka was another example even Balotelli and Rashford.

From whom they will learn this young players we have? The last time I saw we sold almost every senior figure at the club. Rooney, Anelka, Fabregas… played in a team full of experienced and talented players. It is easy for Foden to play and develop at City. He would struggle in our squad.

Recently Emile said his reference at Arsenal is Özil.

He is but I for me Ozil is not that kind of a personality. He can show him few tricks but he is not really a character that would have someone under his guidance. Monreal was a great senior figure for example and we shouldn’t have sold him.

Maybe he was under influence of those balloons.

From whom Martinelli is learning from?

We shouldn’t expect from youngsters to be our saviours. If Martinelli played more often he would probably quickly get lost in the average because the other players would drag there. On the other hand you have Foden who has a players around him who push him more. It is easier to play with better players.

We should start playing him as a deep lying playmaker. Thats how he played in youth tournaments for spain, and honestly looked like a future star when doing so. Theres a reason Real Madrid bought him. If he wants to stay here i think we should keep him. He might not be big and strong but hes smart and has a good technique. We are a pressing side so having lots of muscle in your defence isnt as necessary, considering most of the ball turnovers will happen from interceptions. The issue with yesterday was simple playing Guendouzi and Willock in… Read more »

I’d take either of them now in a flash

“The first thing you learn in football is to look for options before receiving the ball”
We’ve got someone who excells at this, but he wasn’t tactically fitting our coach’s plan.

Who would that be? I am asking for a friend.

He is an okay player in midfield, but not the dominant kind of midfielder needed to rescue this team. It would be a mistake to sign him on a permanent deal with patchy form during the season.

Totally indifferent to this news as it makes no real impact on our longterm outlook.

When for 15 years 90% of new squad additions are not as good as the guys they’ve replaced it’s going to take more than an individual transfer to improve our fortunes. I think we’re literally 15 players short of a champions league quality squad.

He’s casually better than anyone of Guendouzi, Xhaka or Willock so it’s disappointing knowing he’s not going to stay and we’re not going to replace him but maybe it’ll all help me come to terms with the death of Arsenal as a competitive or at the very least entertaining side.

Another Dennis Suarez deal gone wrong. The guy is good, I am sure in 5 years he will be great. But we really need to invest the money in keeping our best players rather than bringing players who think they are on holiday.

Our best CM this season and it’s not even close. Probably says more about our options than his ability but we don’t have anyone like him and we’ll need to replace him (and then some).

His quality maybe high for Spanish league better still hes perfect for the French one but as we know in English league you have to accept roughouse, successful mid foreign players only make it in our league through talent and steel, I don’t blame him but sadly another top player isn’t suited to the high speed level of our league.

It is no coincidence that when Wenger went to all small technical players the team declined. That only works if you can afford the talent Barcelona had.

‘… you can understand why the player might prefer to put down roots elsewhere.’

Ouch. That one went a bit close to the bone.

Yeah, I’m on board with cutting our ties. He’s not a bad player but we need to be wise with our transfer cash. I think we can do better, he looks to have some injury concerns, not ideally built for midfield in England. It didn’t quite work out how we hoped, we need solid reinforcements in that midfield central.

Hopefully Emre Can will be available in the summer, just an idea.

He’ll be replaced with another season-long loan signing. Ramsey anyone?

Arteta has one hell of a job on his hands. A group of talented youngsters with potential, but you could see the difference in quality last night. We need some decent additions or we will just fall further behind. In real terms we’re now behind Leicester and wolves in quality, and miles behind the top 2. Chelsea are doing business and will be better next season. Dig deep and make the most of other clubs financial issues or fall further behind. Every position is in need of improving, Leno is great but he needs a quality back up. Outfield, where… Read more »

Here it is as I see it. Arsenal REALLY need to start worrying. Before COVID 19 Arsenal could rely on the support of loyal fans regardless of how they played and even then attendances were falling despite attendance figures being manipulated by the club. Now people will be asking this question “Do I want to pay all this money to see garbage like this AND risk contracting or passing on a potentiakky fatal disease? I ask another question – would you want to risk that to see a team play like they did yesterday? When you answer that truthfully you… Read more »

Dude, I wouldn’t pay to see Arsenal even without the virus.

In fact, this long delay of football has really made me see that it really isn’t that important. Watched the game on TV and after 20mins it was just background noise.

We’ve become so average I don’t even give a shit if we win, lose or draw because this quarantine has really taught me to focus on things that give me joy rather than misery

Heres the thing.   Many people imagine we will get rid of players they don’t like the usual pet hates for no particular logical reasons…   BUT instead we will be losing a lot of our better players.   Mainly bc we are 4th season out of CL/ prob Europa and we have not exactly exhibited better purchasing practise in January nor critically chalked up the most important improvement under Arteta in points.   Football these days does not have the patience some people on here prefer to advocate.   Therefore we will be prey to more ambitious teams and… Read more »

Sorry long rant as usual but we don’t seem to be doing anything but threading water for a while now.   As mentioned when many preferred to be rid of Arsene and felt it could only get better, we could also and has been proven get much worse.   We are now languishing in 9th. Looking in, most other clubs do not see us as the “Big Club” some here still prefer to imagine we are.   Unless we can recover towards 5th at least by end of season, our allure has faded fast.   Arteta for all the promise… Read more »

Another ‘nice’ ‘talented’ ‘lightweight’ pretty boy…. your typical modern footballer. No balls, no guts. Here for the cash.

Don’t worry, I’m sure we can find a Premiership reject at a cut price to replace him.

I thought Barney Ronay’s (Guardian) description of Ceballos as “football’s equivalent of the overdue library book” quite amusing.