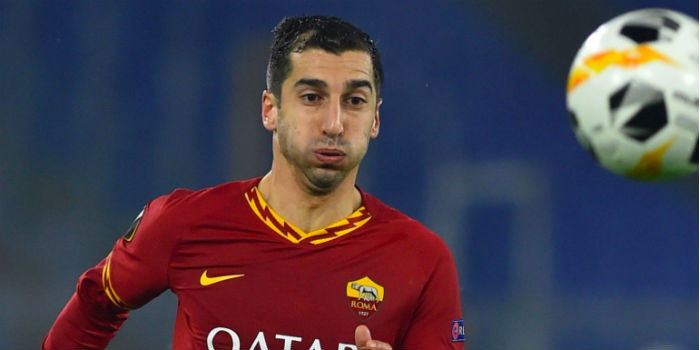 Roma have announced this evening that they have extended Henrikh Mkhitaryan’s loan deal until the end of the Serie A season.

The deal done with Arsenal last year had a June 30th deadline, but because of the Covid-19 crisis seasons have been extended. In much the same way we found new terms with Real Madrid over Dani Ceballos, a deal has been done to extend the Armenian’s time in Italy.

Not only that, I Giallorossi say that there is a ‘preliminary agreement’ between the various parties for the 2020-21 campaign also.

The 31 year old joined Arsenal in January 2018 from Manchester United, one half of the most expensive and underwhelming swap deal in football history.

Alexis Sanchez went the other way to earn more than £400,000 a week at Old Trafford, while Mkhitaryan’s £200,000 a week made him one of Arsenal’s highest earners behind only Mesut Ozil and Pierre-Emerick Aubameyang.

In 59 appearances for the Gunners, he scored 9 goals and made 13 assists, but never found any real consistency and certainly never recaptured the kind of form that he displayed at Borussia Dortmund.

On his move to Serie A, the midfielder opened up on his unhappiness in North London, saying, “At Arsenal I was not getting pleasure, so that’s why I said it was better to come to Roma and to get happy and to get the pleasure from playing football again.

“I knew I was not going to play a lot – maybe I would sit on the bench, like I did the last three games before the international break.

“I knew here I would have more opportunity to play.”

In total he has played 19 games for Roma, producing 6 goals and 4 assists in his time there.

So we are not going to get a penny for him since his deal expires in 2021 ? also are we covering half of his salary ? phuck raoila and phuck agents in general. Wenger was right in every way possible.

Cannot wait to see the back of this clown. Alexis had lost some pace, but swapping him for Mickey Mouse was akin to swapping Maradona for Mustafi.

I doubt he had any part to play in deciding the swap, so this is unfair to the lad. This was a classic Arsenal red card slide tackle on itself.

He actually wasn’t that bad when he arrived and in fact linked up quite well with Aub. You mustn’t forget how bad Sanchez was when he left. At least he always worked hard and was always involved.

I would be surprised if we loaned him again, we need to get some money for him.

If we get him off the wage bill permanently, that will do for me. Who in this post Covid market is going to pay a fee for a 31 year old who has one year left on his contract & earns 200k per week ?

Thats a great idea.
Keep paying a player that plays for another club.
Its no wonder that Arsenal are has beens in every sense of the term with incompetent management like this…

You have no idea whether we’re paying any of his salary or not. Even if we’re paying some, we’ve unburdened the bit we’re not paying – for a player entirely unsuitable to the Premier League. Leon, you’re clueless!

apparently he terminated his contract with us a year early. does that mean his camp will have to pay us? or that we just get his wages off the bill?

Did not need him but Mslintat signed him anyway.   As mentioned that season, should have gotten Mahrez early before city came in late in window and jacked the price up.   Those that think this whole super agent influence is a new thing on Sanlehi and company need only look to this deal where Raiolla basically had us by the bollocks bc Mslintat allowed him.   We rejected City’s move for Sanchez (eventually as mentioned they came back in for mahrez), and then left ourselves wide open to Mino and United as the only remaining bidder for the Chilean.… Read more »

So if I Giallorossi say it, it must be true, except it probably isn’t, but hey, that’s all part of the fun.

If he rejoins Roma on loan does that mean that Arsenal have to pay a fee to Raiola?

Bring him back to London and use him, I’m sure that Arteta could get something out of him for a year unless of course Roma pick up all his salary or they pay us a loan fee?

There should be no agreement for another loan. Roma either pays the fee to buy him or sell him to some other club. Arsenal is a joke. Charity club FC. Then the board says they have no money. Maybe if they would get ruthless there would be money generated from players. Time for Raul to leave as well. This guy has done nothing to change the dumb decisions this club constantly makes. Has to be one of the worst ran clubs in Europe.

Really, really stupid not to accept the reported 10M offered by Roma in January.

What in the good Christ would have stopped a sale in January? A fee and his wages off the booke. Sweet fancy Moses.