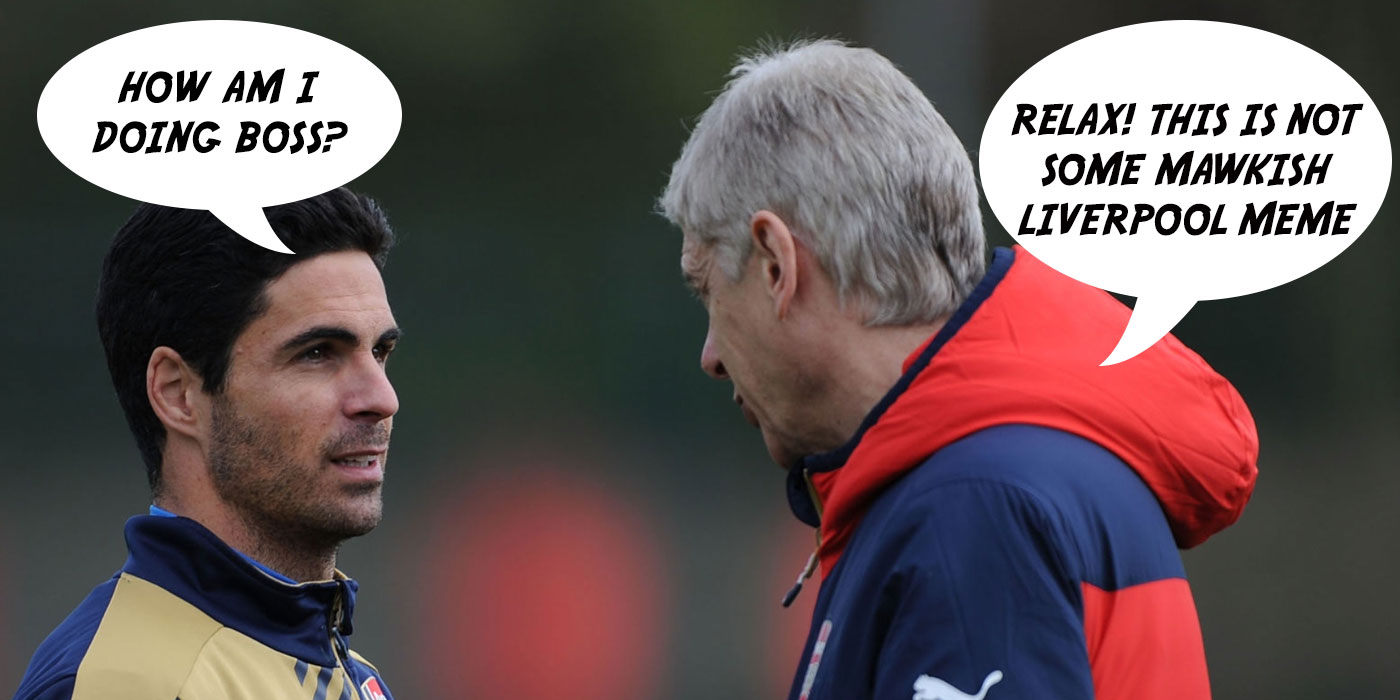 Mikel Arteta says he hasn’t spoken to Arsene Wenger in the build-up to the FA Cup final at Wembley tomorrow, but says he’s been in touch in recent times and that speaking to the former manager helps bring him a sense of calm.

The Frenchman was famously not one for ranting and raving, and his vast experience as a manager is something the new boss has learned from as he begins his managerial career.

He’s hoping to follow in Wenger’s footsteps as an FA Cup winning manager, while adding to the cups he won as a player in 2014 and 2015.

Asked if he’d spoken recently to the now Head of Global Development at FIFA, Arteta said, “I’ve been in touch over the last few months a few times with him but not before the final.

“It’s great to have him on board and he gives me great advice. Just talking to him, you know? He has such a knowledge.

“He’s such an intelligent person, just knowing that he’s there and he’s going to be supporting us and supporting me, it makes me feel calmer.

“You can talk about anything with him and you can take the book out and make some notes!”

Hopefully he has some notes on beating Chelsea in the FA Cup final, something we did twice under Wenger: 2-0 in 2002 when Freddie Ljungberg left John Terry flat on his face to add to Ray Parlour’s goal; and in 2017 when Per Mertesacker stole the show and Aaron Ramsey scored another cup final winner.

When a man can combine the philosophical wisdom of Wenger and tactical wizardry of Guardiola, I’d bet he his destined for great things

… and the dour pragmatism of David Moyes 🙂

Always a place for dour pragmatism. 2005 cup final a case in point.
leavened with a large slug of tactics and a pinch of man management, of course.
jeez I’ve been taken over by Jamie Oliver.
Sorry..

Alex McLeish : am I a joke to you?

Agree brother…….and humble…i’ve already seen that Arteta is destined for great things – I wish fans are behind him and hopefully the board is fully supporting him

And a good support from the fans

What tactical wizardry of Guardiola? It doesn’t take much tactical wizardry to get already world class players to play world class football and win loads of trophies.
I wonder if he could win the Bundesliga with any club other than Bayern, or La Liga with any club other than Barca and Real – even Atletico would do, despite the fact that Simeone has already done that.
He’s just a Mourinho with better manners.

“You can talk about anything with him and you can take the book out and make some notes!”

That’s not gone down well mate.

I didn’t see it

I heard that Wenger’s voice is so calming that he is going to release a meditation video.

I’m not mad at this one. It’s good and terrible.

I’ll take that! Kind of like late noughties Barcelona.

…“Always wear a coat with buttons”

I could imagine arsenal winning the FA cup.. the final whistle blows and Arsene got up delighted, celebrating at his home, body tilted backwards, head upwards, clenching both his fists front of his chest ..

Then blogs starting Sunday morning with beacon and waffle.. and still boilks from the night before

The Kolkata Gooner
Reply to  Djgooner

The one dislike is from Mourinho. What’s he doing, going through the comments on the # 1 Arsenal fan site?

Futsboller
Reply to  The Kolkata Gooner

It’s from where he draws his inspiration, surely.

I’ve always hated Chelsea even before the money. I hated them because they ruined our original invincible season with George Graham back in 90/91. In those days even as a kid I’d look on teletext (remember that?) at the fixtures and if we had Chelsea, in my mind it was usually an automatic 3 points unless it was at Stamford Bridge. Really hope we win on Sunday. Arteta deserves to win this trophy for such a great start in what has been unarguably the most difficult of circumstances to come in as a brand new manager anyone has faced… ever.… Read more »

I was there at the Bus Stop on Fulham Rod that day. Kicked us off the park. Aah, the old, old story.

In hindsight, I’m glad we didn’t go unbeaten that season, because it would have been a travesty if the 90/91 team had been considered equal in any way to the 03/04 side. When future generations will only have history books to go on, they will always recognise the actually Invincibles and Arsene Wenger to be head and shoulders above all their counterparts.
Of course, that doesn’t mean you can’t hate Chelsea – you can and should!

.you missed the penalty win over utd in 2005. Remember Wenger has a record 7 fa cup titles to his name.

That one, we robbed it. Man U dominated so much during the game. That should be part of the pep talk. If things do not go well, try to rob the victory.

We are going to have to start well right out of the blocks. Give them an early goal and it’s going to be very difficult.
Limit the shots on goal like we did against Citeh and hit them on the break with speed. Set pieces are a worry.
COYG

A Different George
Reply to  Tonyadamsnose

They are a very suspect team defensively. They conceded more goals than we did. Their best available defensive player, Azpilicueta, has shown a real decline recently. Not sure if he is fully fit, and of course, Kante who is in a class by himself when played in the right position, is injured. Rudiger and Zouma are both capable of ball-watching and other big mistakes (yeah, I know, we kind of have that in our toolkit as well–Tim Stillman is right that we need the good Luiz to turn up). Alonso has probably not tracked back since he was 11 years… Read more »

I’m concern that Chelsea may not press as high and as intense as Liverpool / City. I’m concern that Chelsea will let us play and have some possession, defend deep and hit us on the counter. I’m concern that Pulisic will run at our defenders and draw fouls from them at every opportunity. We need to minimise set pieces, Giroud is on form. We need to be creative at the final third and have to take our chances. Luiz, Holding and co please score from corners. Ceballos, Pepe, Saka, Bellerin and Tierney, please put in some beautiful crosses. COYG. Bring… Read more »

I think we will win confident but I would start Eddie up top to pull Zuma and rudiger out of position. I’d over load the left with Saka LWB. He and Auba should link well against reese James if Auba can get Cesar out of RCB then we should have a lot of joy I think this will be a massive game for Pepe. 1 he will have to defend harder than ever against Alonso but at same time just like at the bridge he should draw a lot of fouls from Kovacic and Alonso. Would fancy a bet on… Read more »

I’d go with experience up front in this one – Auba, Lacazette, Pepe. Eddie can be an excellent second half sub to bring on fresh legs and press press press. The big question for me is everything behind — does Arteta try to win the midfield back from Chelsea by adding a third player (Willock, MN, Torreira?) alongside Xhaka and Ceballos, thus negating their attack before our last line of defence, or does he go with the usual 3-4-3 and hope we can get our shape right to turn over the ball more often than not?

I want Pépé to make a statement tomorrow. He should use his dribbles as a weapon and be too much for them to handle. He needs to open their defence really wide. The usual run, attempt to dribble and fall won’t do it.

Hopefully some of Arsene’s insight into the market would also have been imparted.

No mean feat Arsene keeping us in top 4 for so long. Mistake was follwing mini revival 2013/14, we did not push Wenger to shy from his over prudence and open up the purse strings 2015 a little.

Good to have Arsene as a resource/sounding board for Arteta.

It’s true when people say that Arteta must have learned so much working under the greatest manager ever. He did so for five years, and then he went to be a coach at Man City and watched a half billion pound squad play amazing football and win loads of trophies.

Now the manaagement need to come on board, dembele is far much better than the whole lot Arteta wishes, Auba is correct