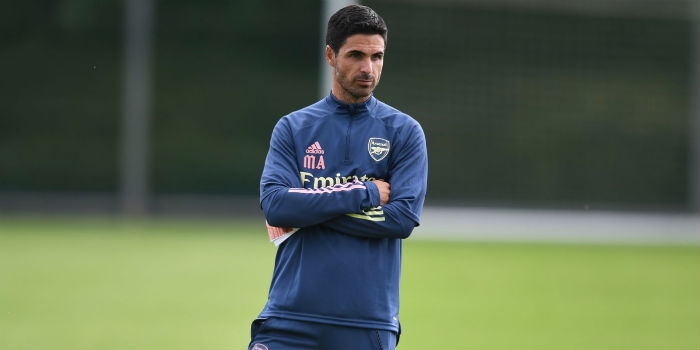 Mikel Arteta believes there needs to be a review of the use of VAR at the end of the season in light of a spate inconsistent officiating.

Arsenal have both benefitted and suffered at the hands of subjective decision-making in recent weeks with Matteo Guendouzi escaping punishment for wrapping his hands around Neal Maupay’s neck at Brighton and Eddie Nketiah seeing red for a challenge on Tuesday after a review of the incident on the pitchside monitor.

In the same game, a Jamie Vardy stud-to-face collision with Shkodran Mustafi was deemed accidental and the striker escaped without any punishment.

With offsides decided by rulers, the handball rule operating differently depending on if a player is attacking or defending and VAR failing to rectify Hawk-Eye’s first fail, there’s growing frustration at the lack of accountability.

Asked about the situation ahead of Sunday’s north London derby, Arteta, who was furious with some of the decisions on Tuesday, said a discussion needs to take place.

“Well as I said before, some of them [the decisions] are very complicated,” he said.

“We don’t know how they are judging the situation but I’m sure they have the right intentions.

“At the end of the season, I think that is something that has to go into debate.

“We need to agree on some principles that we’re going to apply, so at least every decision has the same raised level of determination, basically.”

Arteta had already come to the defence of the officials earlier in his press conference asking if he was at all concerned by the appointment of Michael Oliver as the referee for Sunday’s game at White Hart Lane.

Sp*rs are said to be furious that the 35-year-old has been given the game after he made controversial VAR decisions in two of their last three games; first ruling out Harry Kane’s equaliser at Sheffield United for a handball and then last night not giving the England captain a penalty after he was tugged down in the box by Bournemouth’s Josh King.

“I never have any concern about the decision of the referee,” said Arteta.

“Nowadays, everything’s so professional, dedicated and they’re under so much pressure and criticism.

“I know they try their best with the decisions that they have to make.

“They’re getting more and more complicated because of the speed of the game and how quickly they have to react, and the pressure they have with the new VAR system as well.

“We’re here to support them, we need them, they’re a big part of that.

“Now we complain that we don’t have the fans and we realise how important they are, maybe one day we won’t have referees and we’re going to say, ‘Wow, they were crucial for this game to work’. So we have to support them.”

VAR brought in to eradicate human error……operated by humans!!!

I get the sense though that Riley wants this to fail as its effectively oversight over officials. The PL has been a disaster in terms of how it’s implemented VAR in very unusual ways compared to other leagues. The PL went through 70 percent of the season or so before a pitch side monitor was used which means outside officials were making all the decisions. The VAR official rotates every week if not every day enduring there is no consistency as its constantly a new official looking at every incident. Var is here to stay so the PL needs to… Read more »

Nobody but the mug punters wants it to succeed. We want to watch sport. They want to give us “entertainment” which for them means controversies. No controversy in having objectively correct decisions rule the day. Hence less value in advertising.

Sounds conspiracy-like but honestly might be entirely plausible, I’ve seen VAR being operated in other leagues and they seem to be getting decisions consistently right. Biggest recent example was the first penalty retake for Atletico against Barca, where Ter Stegen saved the shot from Costa but was off his line, and so had to be retaken again. I can think of a few times when it’s been super inconsistent in this regard alone in the PL

A Different George
Reply to  Atom

If you are looking to conspiracies, don’t you think referees would very much support VAR? It effectively creates twice as many high-level appointments as before (or 50 percent more, if being a fourth official pays the same as being the referee).

I would be happy with an AI ref, viewing an from all the camera angles to make a decision. This Mike Riley will be followed by many more!

Arteta is super human being…. showing understand even when hes fustrated… I really do hope he succeed with Arsenal

Great, a referee who owes s***s a decision. I’m sure Harry Kane will be given a soft decision, like every other London Derby.

I think I might put a bet on Kane winning his customary penalty from us. Spuds might be raging Oliver is officiating but he’s no pal of ours.
I cannot believe the number of penalties the Mancs get.

Oliver has awarded 10 penalties to the opposition and 2 to us. I think after the last few days and with him officiating Sunday, it’s nailed on the spuds will get a penalty… and Son will dive…. groundhog day!!!
We’d better bloody win!!

This has been my biggest problem and nobody talks about them. If they get anything close to contact in the box or anything near the arm, forget about the hand, it’s a quick review and penalty. Early in the season we had a situation where Chambers was fouled in the box before we scored. It went to the review and it was clearly a foul on our man so advantage goal for us or penalty. The man behind the review, NOT VAR, decided to rob us. Spurs Watford first leg, From a corner kick the ball clearly strikes Ali on… Read more »

A Different George
Reply to  Carll

If you watch the replay carefully, Kane was NOT “tugged down” by Josh King. He was falling before the contact (not diving, to be fair) because he was tripped by his own teammate (Vertongen, I think). I think the referee saw this, and certainly Oliver as VAR would have also.

Var is OK. Just needs to be applied consistently – Now it seems there are different rules for different games in situations that are 99% similar.

I feel like it should just stick to analyzing goals, last man tackles and offsides.

Arteta is one of the coolest individuals I have had the pleasure to have seen. He does not rant and rave at officials, but puts his point across succinctly and to the point. I think he could be one of the best managers ever to take the reigns at Arsenal!!

Amen to that. It’s just like he is living his own words about changing the culture in the club. Maybe the fans should take a cue, and the culture would truly be changed?

The blunders on VAR shows how inconsistent these refrees are with their calls. Even with the benefit of replays they are confused about the rules of the game.

As are most fans.

I’ve seen the words ‘intent’, ‘played the ball’ and ‘accidental’ thrown around so much recently so let’s be clear:

If a challenge is ‘reckless’ it’s a yellow card. If it’s ‘excessive force’ or ‘brutality’ or deemed to ‘endanger the safety of an opponent’ it’s a red.

Intent, playing the ball and if it was accidental do not come into the rules whatsoever.

I’d say that Vardy’s challenge was ‘brutal’ and Eddie’s was ‘reckless’. But perhaps I’m just biased.

Not to defend Vardy, but surely if someone does indeed accidentally kick an opponent in the head for example, there must be some leeway in the rules for the fact it could be an accident? It may still look ‘brutal’, but why punish someone if fate decided a foot collided with a face and there was no intent? Not saying this was or was not the case for Vardy on Mustafi. If I’m falling over because we were tussling for the ball and my studs accidentally scrape across someone else’s face, I shouldn’t be sent off for that – it… Read more »

You could be right, except that Vardy’s unnatural backkick was no accident at all.

There was nothing accidental about Vardy kicking out at Musti, he meant to leave something on him. He nearly shat himself when he realised he’d caught him in the head, his face was a picture of guilt and he started acting all concerned because he knew he should have been sent off. Red card and no golden boot but the referees all bottled it and he got away with another one. How Vardy manages to run with so many referees and pundits up his backside will never cease to amaze me.

Then there’s the decision against Villa yesterday. How they gave united a penalty for that is beyond me.

It’s a bit more complicated than that, surely. If I carelessly swing an elbow jumping for a ball, and it makes minimal contact with an opponent’s jaw, I might see yellow, might not, and might even not be called for a foul. Certainly, not a red. If I am deemed to have intentionally swung my elbow and make the same minimal contact, it is a red. In the latter case, the only argument is about intent.

intent matters for violent conduct which i think Vardy falls under, i think he meant to kick Mustafi but not in the face. I believe the word ‘deliberate’ is used in the rulebook I think reckless/excessive force comes in more when it’s a challenge for the ball which I don’t think the Vardy incident is. If it wasn’t on purpose (DOUBT) then it probably falls under neither reckless nor dangerous since he was falling over and didn’t have control of his flailing limbs (DOUBT). So in my opinion Vardy either gets a red for violent conduct or nothing. Although it… Read more »

Arsenal have far more reason to fear Oliver as referee than Spurs ever will…but you can guarantee he’ll look to balance things up on Sunday. Absolutely no doubt in my mind at all….

“Mikel Arteta believes there needs to be a review of the use of VAR at the end of the season in light of a spate inconsistent officiating.”
“At the end of the season, I think that is something that has to go into debate.
“We need to agree on some principles that we’re going to apply, so at least every decision has the same raised level of determination, basically.”

VARY important words, i hope they take heed of what he said.

Great combo: a ref with subliminal guilt for wronging the opposition and Sp*rs habit tactical fouling a diving for penalties. Kane or Son are nailed on to get at least one freebie between them. Thankfully that little ball of fouling rage Delle isn’t going to be playing.

I believe VAR had its merits and demerits. Iron out the grey areas and we are good to go.