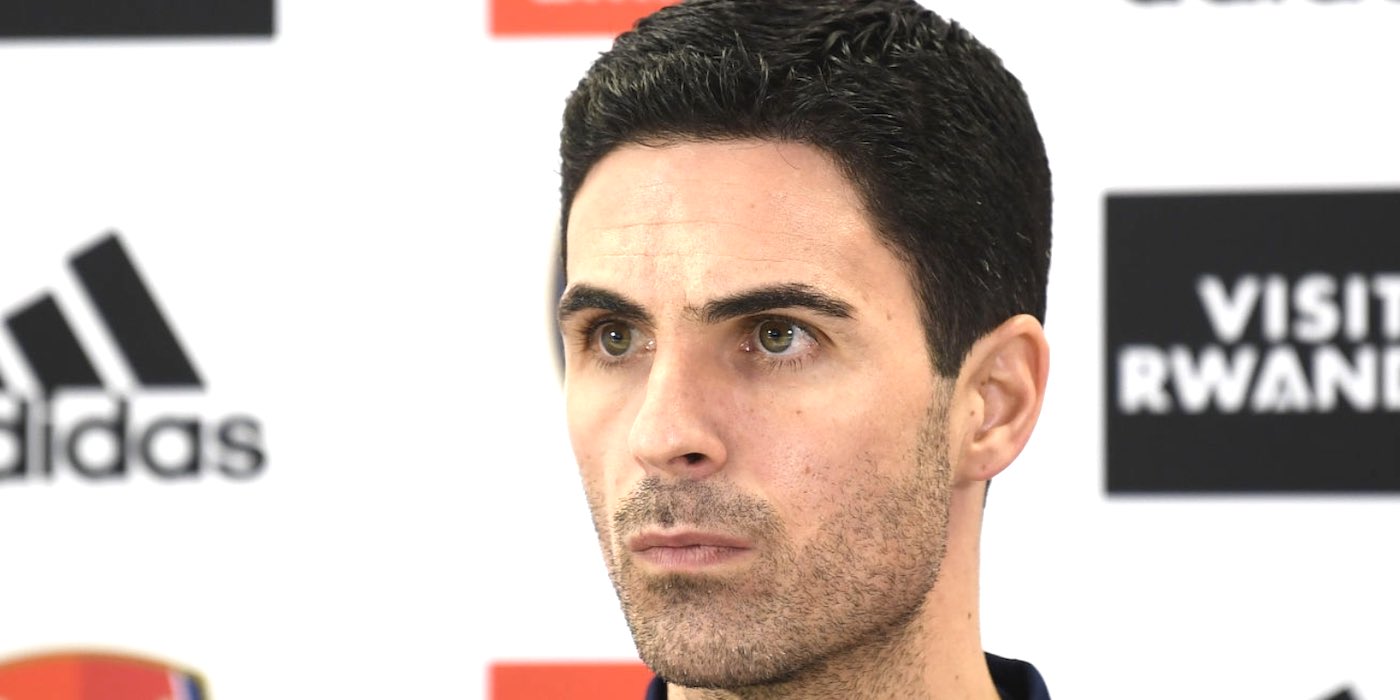 The North London derby is always a spicy game.

A North London derby with long-standing pantomime villain Jose Mourinho in charge of Sp*rs adds a bit of extra spice.

The feuds between Arsene Wenger and the current Tottenham boss were legendary, and even in the build up to this game Mourinho took umbrage at a Facebook post by Arsenal about a win over Sheffield United.

All of which fed into a particular line of questioning in Mikel Arteta’s press conference in which reporters repeatedly asked him questions about the Portuguese in an attempt to stoke the fires ahead of Sunday’s showdown at White Hart Lane.

Amusingly, the Arsenal boss was having absolutely none of it, remaining unfailingly polite and positive about his counterpart. That means that there will be no press conference tittle-tattle, in which comments from the other manager are presented to Mourinho for him to react to, thus causing headlines and controversy.

Here’s how Arteta batted away those questions – they are colour coded to indicate different questioners.

I think a derby has a completely different context to what is happening with current form or anything like that. I have huge respect for Jose and what he is trying to do. We know to go there and get a win we’re going to have to do everything really well and I am expecting a tough game.

Q: What have you made of Jose Mourinho’s Tottenham this season?

Well they’ve had some up and downs, but overall you can clearly see what he wants to bring to the club. He manages the energy, the momentum, and establishes a really strong culture at every football club. And as well he makes sure that he wins, and he’s done it at every single club he’s been, you know.

Q: Is he still a world class, great manager for you?

Q: You said you respect Jose and what he’s trying to do. What is he trying do at Sp*rs because they didn’t even have a shot on target against Bournemouth and I was at the game against Everton and that was a very un-Tottenham like performance from years gone by, so I wonder if … do you know what he’s trying to do and if they’re the Sp*rs of old?

Well, he has a very clear way of playing, a very clear way of how he manages games. I think clean sheets are a big thing that he want to do, but don’t forget his teams always score a lot of goals and they are really successful and he’s been able to win titles because of that. I think in a long period they’ve had a lot of injuries so he hasn’t had the chance to be consistent with his team and that’s a big disadvantage that they have. I know that he’s done it and I know people that have worked with him and he always find a way to be successful and I’m sure he’ll do it again.

Q: You talk then about Jose and still being a world class manager, I think everyone will always agree he’s been the master of pre-match mind games in the press conferences and things like that. How do you approach it when other managers talk about you or your players? Is it something you just have to ignore.

To be fair I don’t read and see it a lot, but I think the success that Jose has had is not from the press conferences, it’s the way that his teams perform on the pitch and the amount of football games that he has been able to win. That’s an extra that obviously you need to know how to deal with but the main thing wasn’t that when it comes to his success.

Q: You’ve told us several times you speak to Pep on a regular basis. They’re obviously big old rivals. Have you spoken to him specifically about this weekend?

Aston Villa 1-0 Arsenal: By the numbers

Arteta strikes me as a no-nonsense – let the match day do the talking type of manager. Kind of like Pep but more no-nonsense attitude. I like that attitude. Jose gets riled up in his press conferences and tries to make it all about him or how his team got hard done by. Boy I hope we give them a good whipping on Sunday. Even if we win 1-0, I want to see them absolutely useless against us. Ideally a good thumping would be lovely. But it’s a derby. Even though they looked attrocious last night, we still have to… Read more »

The Tottenham we saw yesterday evening will not be anything like the Tottenham we’ll see Sunday, they’ll be at our throats, but Arteta knows that.

Jose has a ready made excuse of them playing the mighty Bournemouth on Thursday but Arsenal having a couple of days extra rest. But I don’t give a fish’s tit if he decides to use those cards as long as we stuff them right up.

They tried to set him up. Reminds me of school days when a brings up c to b, b says something nasty about c, and then a goes to c and says b said this about you.

Yep, that about sums up peak tabloid “journalism” ?

Not so subtle from the journalists. Laughable. But Mikel deals with that in such a classy way.

So classy! Arteta is absolutely the right man for the job at the moment and a perfect role model. Still giving me those Wenger vibes.

They might be out of form but derby does hit differently. I remember us being toilet during emery’s reign but we almost always did well against spurs. It would be nice to thump them but realistically they are a team who are european finalist and a team with really talented divers so we should be wary about it. I am confident that if injury god and var cunts dont mess this up we will win this game.

Michael Oliver the referee, and Mourinho has had a go at him twice in the last week. I hope that hasn’t got into Oliver’s head but I guess we’ll see. You can bet your bottom dollar that Kane is going to take a tumble in our box tomorrow and hope that the ref gives him leeway due to the “incorrect “ VAR decision last night

Absolutely spot on, how shortsighted of the PGMOL to allow Oliver to officiate the VAR in a Tottenham game when his next match is the NLD. But typical of that shambles.

To be fair Michael Oliver seems like the type of twat that would double down after taking criticism. I pray that I’m right.

Oliver is the worst…

I disagree, I remember he sent off diva Maria when we played man utd and managed that game well overall. I don’t remember when he screwed us but let me know if and when he did.

I believe Oliver has one of the most Arsenal-friendly records of all the PL referees.

anyone remember Michael Oliver sending off that United Player in Utds back yard against us in a FA Cup Quarter? I like Michael Oliver, League has plenty of Mike Deans and Anthony Taylors, Oliver is one of the better refs in this league imo… every ref makes mistakes, I get the impression that Oliver is one who wants to learn from them… unlike the other untouchably protected twats

Absolute class from the gaffer.
I apologise to him in the hope that I get back into the starting lineup for the Derby.
Please pray for me ?

Apology has come too late, sorry. Have fun being loaned out by PSG for 6 straight years 😉

Absolution granted. Your warlord approach is needed against Spurs.

Great stuff, A masterclass in how to handle a potentially tricky press conference.

For me, this is the most interesting NLD for years. Let’s be honest: Spuds have tanked under Maureen this season. I’m sure that Levy didn’t bring “The Special One” in to finish 7th or 8th, which is where they’ll end up. Our Portuguese friend is under real pressure right now and a heavy defeat by his club’s most bitter rivals would really turn the screw. As I’ve said before, I think Maureen is finished as a top manager and is now being found out. Spuds will probably be his last job in football management. Like his old enemy Wenger, he’s… Read more »

There he is. Been awhile fat gooner!

Hi fatgooner. You actually sound kind of up… beat!!? Has Artetas culture change affected you too?

I couldn’t believe my ears and eyes when they sacked Pochettino. The best manager they’ve ever had, who got them to the CL final, and arguably one of the best three coaches in the PL and they actually SACKED him!!!

Anyone wishing to shoot themself in the foot but doesn’t know how need to look no further than Spuds.

Can you start writing his name Mo*rinho? Seeing his full name on this site makes me feel grubby.

You shouldn’t let him bother you these days, he’s past it and doesn’t have a clue how to motivate or organise teams anymore

Just sit back and take in the schadenfreude from what remains of his career. Every season he will make a bigger fool of himself than the last

Yeah, but when I use these answers in Football Manager, Sean Dyche still goes after me and accuses me of being passive-aggressive.

Well that must have been frustrating for the press. Gotta love Arteta! COYG

Arteta is very cool – in many senses of the word.

Wise to avoid the mind games. What I worry about is Sp*rs tendency to tactically foul opponents (it’s one of their central characteristics under Jose) and Mourinho’s ability to work the referee. I just hope we don’t lose players to penalties or injury. If not, I think we should stuff them.

Arteta refuses to give the tabloid press their prefered answers. I like his steel, sharpness and charisma. He is living his own words about changing the culture.

Lol no shots on target vs Bournemouth

I feel this is what Arteta is trying to work for us. We still fall short in transition and our frontline need to find a better relation. Going two up top with either of Auba and Laca or Nketiah may not be a bad option too instead of 3-4-3.