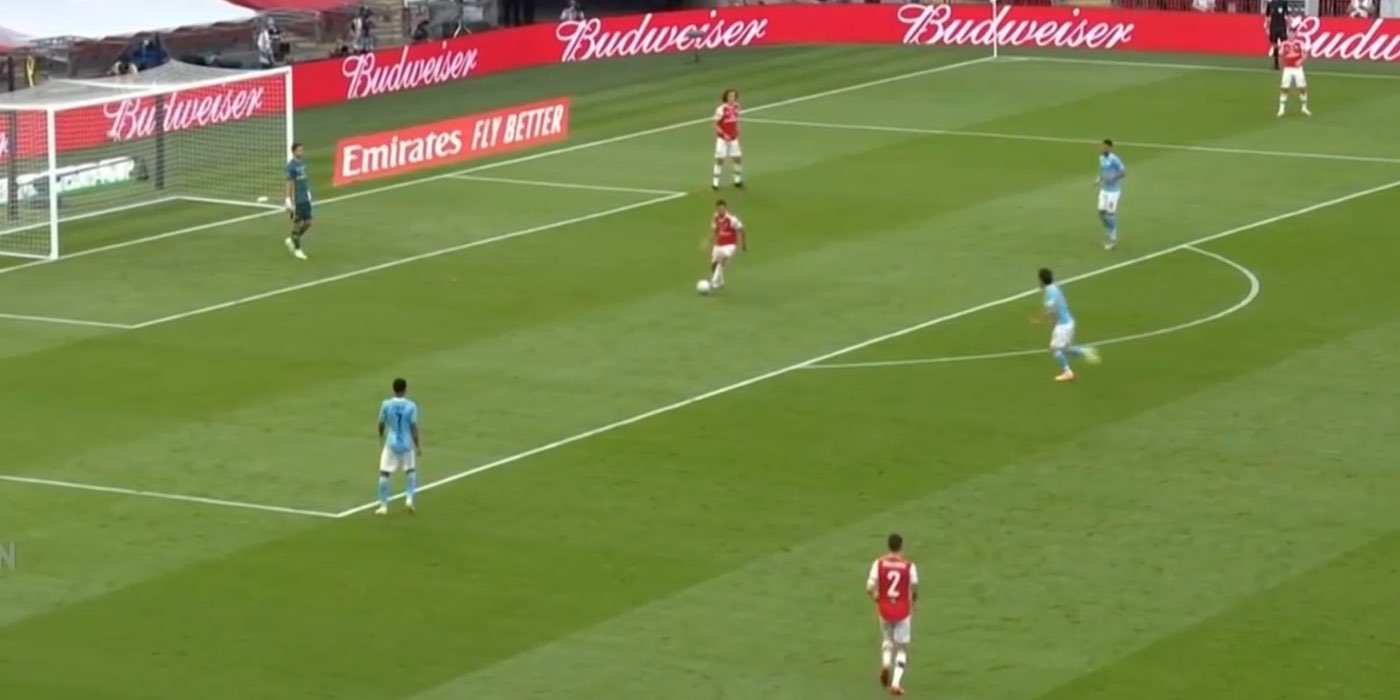 Despite the beauty of our first goal against Man City on Saturday, fashioned from keeping the ball at the back and working it forwards, there’s a nervousness among some fans about that style of football.

It wouldn’t have been helped by the incident a few minutes previously when Shkodran Mustafi was caught on the ball in our box, necessitating some last-ditch defending to prevent the opposition scoring.

Yet that is the way Mikel Arteta wants to play. He knows there’s a risk/reward balance to be had, and he is keen for his team do it more so they become more comfortable with it.

Asked if he got nervous when his team passed it around at the back, Arteta quipped, “No. I get nervous when we kick the ball long!

“It’s something that we have to do more often.”

It will be interesting to see what kind of tactical approach Arteta deploys for tomorrow night’s game against Aston Villa. Containment against the likes of Liverpool and Man City is understandable, but Arsenal will need to be more proactive tomorrow, and the boss is expecting a tough clash with a team scrapping for their lives.

“They have a massive urgency because they probably have to win both games to have a chance to survive,” he said.

“When you are in that situation you are fighting for your life, so they are going to give absolutely everything. We have to be in the same mood.

“We still have to win both games and wait to have a chance to qualify for Europe and that’s the mood that I want from everybody involved.”

I cant wait to see how he is going to instill this culture. Better days ahead. i love this guy

Well in the meantime we’ll just have to have our hands in our mouths while tears of nerve trickle down our cheeks.
Especually if kola-60+%passrate-sinac is part of that gameplan.

Great communicator, motivator. An inspiring leader all and all.
He still has a lot to learn but the people skills are the most valuable at any level and the harder to learn.

I don’t think Villa can press us high the way Liverpool and Man City did. Which means playing out from the back and keeping possession is much easier. The problem tomorrow would *normally* be breaking through a low block without either a late-arriving attacking midfielder (like Ramsey) or a number-10 type passer (like Ozil). Perhaps Pepe coming in from the right can be the means to break through the line. But it’s possible that tomorrow won’t be a *normal* match–Villa cannot settle for a draw and so might be more open, at least in the second half.

You can’t beat Villa by parking the bus like we did against Liverpool and City, let’s see if Arteta is more than just a budget Jose Mourinho.

It’s one thing beating teams who are half way on holiday but Villa have something to fight for, we lost to Brighton not that long ago so i’m still to be convinced.

We’ve had results like this quite regularly over the years so i’ve learnt not to get too excited.

One swallow doesn’t make a summer

Do you honestly believe Man City was on the beach in an FA Cup semi-final? Are we a better side than Man City? Of course not. Was it a legitimate win against a motivated team? Yes.

They weren’t 100% motivated, none of them want to bust a gut or get injured before the champions league restarts, that’s the one they really want.

The FA Cup hasn’t been a top tier trophy for about 20 years.

No, I can’t accept that. Wembley May have changed and Cup Final Day may have changed (kick off times, etc) but clubs big and small still want to win it, with a passion. For many people, it is still the greatest club competition in the world – millions still watch the final around the globe every year. City wanted to beat us the other night, make no mistake. We did a great tactical job on them. You just can’t see it.

I think it’s a greatly diminished competition and i know many other do as well. The fact that the big sides don’t play their first 11 until the semi’s tells you all you need to know about where the FA Cup now sits on the list of priorities. A top 4 finish is more important, both in prestige and finances, Wenger even admitted as much about 15 years ago. Of course City wanted to win but they didn’t throw the kitchen sink at us. If that was a Champions League semi Laporte would have been playing upfront for the last… Read more »

I can see your point and it could be the case. My point against your argument is, however, that City also won the League Cup, the most “useless” of trophies they competed for.

Hard to argue that nobody cares about the FA cup when the semi final is United, City, Arsenal and Chelsea, all playing their strongest XIs. Guardiola must have not got the memo maybe?

Are you the fucking dumbest man alive? Man City wasn’t on Holiday and comparing them with Villa makes me think you’ve been kicked in the head by a horse.

Our motivation level was 100%, their’s was about 75%, let’s be honest about that

No need for that Owen

I’d give Zero for effort and the ‘F’ for foolishness

He’s only played that way against Liverpool and Man City as he knew we couldn’t compete with them in any other way. He will revert back to attacking ways in our last League games

I like your negativity. What is your counter proposal? Fire MA?

Be realistic, we have a manager whom despite having only managed about 20 games has lost more winnable matches than he’s won difficult ones. Arteta’s reverted to a back 3 and has got short term results but that’s only mirroring something that both Wenger and Emery did before and the opposition eventually work us out. The same can be said about passing out from the back, in fact Arteta’s benefitting because, as with any change in style, it takes several months to perfect and Emery’s results suffered the early teething trouble. My position is simple, don’t expect a sustained uptick… Read more »

You must be a real joy at parties

It’s no surprise three (whatever we think of them) intelligent football people all took a look at the defenders and midfielders we have and decided we’re more secure with a 3.

Question is how Arteta builds and is allowed to build the side. We do look like a much more cohesive team now than before Christmas. Stopped highlighting players weaknesses, playing up their strengths and fixing a culture that’s been on the slide.

Lets see if one day you can make a positive comment John C. You must be great fun at parties.

Come on mate, for goodness sake! Arteta a ‘Budget Jose Mourinho’….?! That’s low. Mourinho has been bankrolled at every club he has managed, bar the Spuds. And for the most part (ok, I accept that they beat us last week) he has been found out to be an awful man-manager. Man management is the very thing that Arteta excels at – he has had to, bless him – given the resource restrictions he has had to work with. It’s been an awful season, but there have been some great signs recently of hope for the future. Give the guy a… Read more »

18 passes leading to that goal on Sat, most of them in our own penalty area

With Martinez in goal, we definitevely need to play from the back. He is an extremely good shot stopper but I would feel insulted if you compare my ability to distribute to his. I am very confident with him between the sticks like all fans.
Pep is obsessed with the second ball. It is the key thing for him. You expect same from Arteta.

I now pronounce you Sir Hair Splitter of Arseblog News 😉

They are very different points to be fair ?

You make your name proud ?

Oh sure more heart attacks for me! Life sure ain’t a box of chocolades being a Gooner.

Not entirely convinced by this tactic. Several heart in mouth moments near the 6 yard box as we gambled to get the ball out. We need to devise a better method further away from our goal surely. Against City, we were lucky enough and it transpired to become a goal but it won’t be like this most games. What we lack is sufficient players to hold the ball for us through midfield. Granit and Ceballos are developing and recently they have turned to face opponents which is encouraging but we need to get out quicker and find better ‘hold’ on… Read more »