Arseblog News – the Arsenal news site
Home Players Former players Arteta pays tribute to Cazorla but no discussions yet on a coaching... 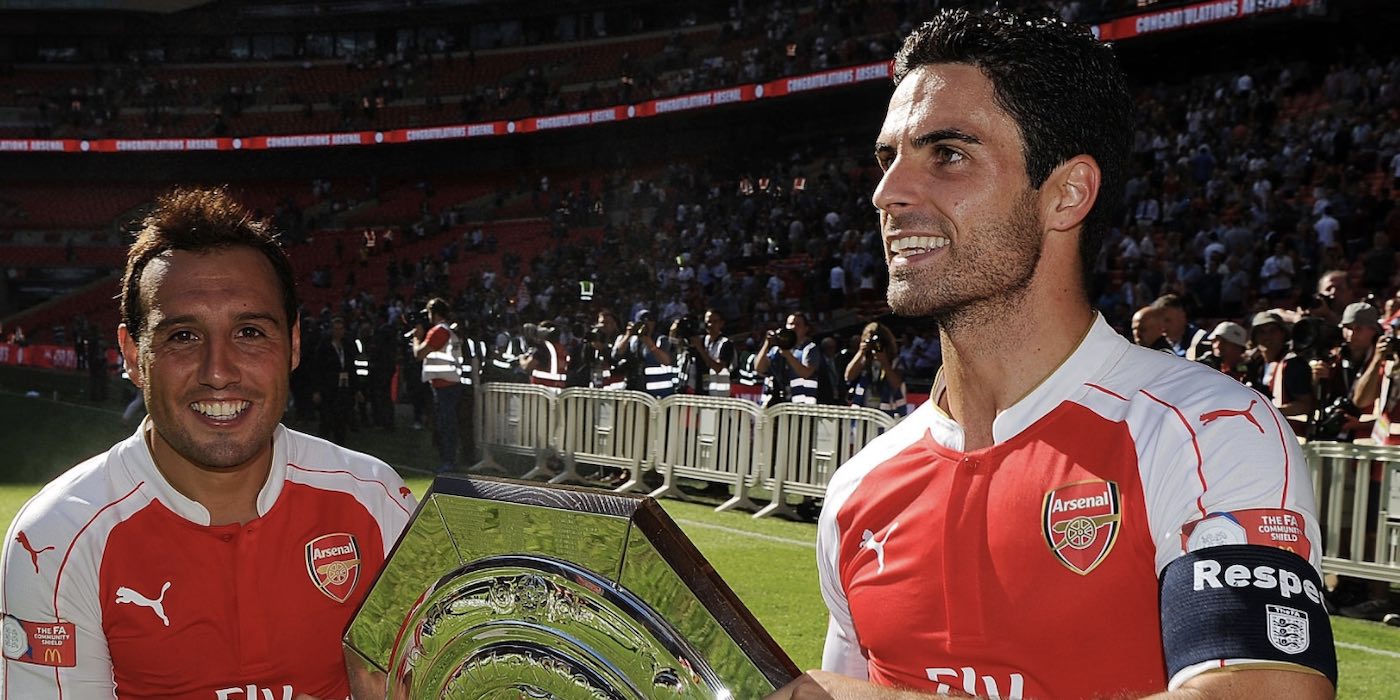 Santi Cazorla ended his time with Villarreal last night, and for many Arsenal supporters rumours that he might be joining up with former teammate Mikel Arteta in a coaching role sound very nice indeed.

That’s not the case, not yet anyway, as it has been announced that he’ll be joining Al Saad in Qatar, the team managed by world renowned scientist and DNA expert, Xavi.

The Arsenal boss said ‘not yet’ to the question of discussions over a role with him in North London, and spoke warmly about a someone he played alongside at the Emirates.

“My opinion of Santi cannot be any higher,” he said.

“Personally, first, with the type of person he is and what he brings to that dressing room, but then also as a player for what he did throughout his career.

Santi’s departure from Villarreal comes at almost the same time as stories reporting Unai Emery is in talks to become the new manager at Estadio de la Cerámica.

The former Arsenal boss has been biding his time over his next job, and looks to have landed on his feet at a very good club who will play Europa League football next season – perhaps part of why he’s been brought in.

It remains to be seen if Arsenal will join them in the that tournament, with two routes still open for qualification.

From 2012 – ARTETA INTERVIEWS CAZORLA FOR AS: AWESOMENESS ENSUES

VAR will solve the problem
Reply to  Jules

That made me laugh.
Sticking to the topic, i believe Santi would be a good addition to Arteta’s management team. Arteta seems very serious most of the times (unless he is beating city or liverpool). Santi’s infectious smile and jolly personality will provide a perfect counterbalance to Arteta’s seriousness.

We should be offering him a 1-year playing contract

I love Santi – he’s one of my all time favorite players- but going to the warm weather and a much more technical/ less physical league almost certainly played a part in him being able to continue his career. The PL is just brutally physical league – especially for an almost 36 year old with a history of serious ankle injuries. He would be an amazing addition to the coaching staff- but we need to move past this idea of bringing players back for purely sentimental reasons.

and also he deserves 350,000 an week contract which he never got inspite of being a superstar of an player. Hopefully al sadd pays him the wage he deserves.

There is a thing called “marketing value”. This is not something I personally like, but this is football business. Santi has never been a big marketing value and would have never had such a salary. Contrary to…

Timorous Me
Reply to  atom

I watched him with Villareal a few times since the restart and boy, he has still got it! But I think you’re probably right that the Premier League would be far from ideal for him at this stage of his career. I still couldn’t help but smile several times in each of those games, though–he’s still such a joy to watch.

I’d want Santi in charge of under 9s or something, a whole group of players coming up with a smile on their face, and hopefully two-footed. I’ve no doubt he’ll be better than me with my 4 year old nephew… “can you kick the ball with your other foot?” Him “No”, Me “Can you kick the ball between these two posts?” Him “That’s boring”
My coaching career awaits…

And the under 9s would be the same height as Santi. Or taller…. 😉

I’d love to have Santi and Mozart in coaching roles in the team, both amazing players, and amazing attitude.

Imagine the level of football being played then. Godly.

Best two footed player I have ever witnessed! I always remember Wenger saying we have to wait to see what foot he uses for penalties to decide his slight favourite.

Kevin De Bruyne probably the best in the PL now with both feet.

You clearly missed out on Bergkamp. What a shame.

He used to switch it up on corners too, whether he wanted an in swinger our out swinger

That makes us all sad.

What a waste of talent. But if that is what he likes, I am happy for him. Deserves only the best.

In a perfect, Goonerific, world – Mik would give the little wizard his swansong season with us… all the while weaning him into the role as his assistant, as worked so well with Per. What better way for him to intimately get to know the players he will eventually be part-mentoring?
Why the hell not?
Really… seriously… why the hell not!

because resources are extremely tight and we have a lot of young players in the midfield (assume we can sign Dani) who need as much playing time as possible to develop. Arteta can teach him the role similar to how Pep taught him on the job if he wants to begin coaching immediately.

We should sign Santi Carzola, he has an unfinished business with the arsenal…

The biggest compliment I can give Santi, is that I’ve never heard a supporter of another team say a bad word about him.

A footballing god, and a loveable human being

Please no Kolasinac……….Holding should get the nod for the Final!

“World renown DNA scientist”..yeah! Isnt he?, i swear, blogs just crack me up with these lines, but seriously, it really would be nice to have a well loved gooner like Santi on board…make it happen Mikel

This is so stupid.

He doesn’t have any offer from Arsenal. There is no issue of loyalty.

He is trying to compare him to his idol Ozil. Fans say Ozil likes money? So does Santi, poor Alex.

If that guy isn’t Özils agent anyway, I would plead Özil’s agent to get in touch and give him some commission each month. This guy works harder on PR for Özil than Özil’s whole PR team altogether, so that has to be recognized with some form of compensation.

Reaffirming why former players owe little to “fans” who expect everything and give nothing. Let the guy live his life, make Arsenal a collective you want to join, and stop this toxic nonsense.

Would be fantastic to have Santi. What a great player and a miss for us since he went out injured 2015. We still do not have a technical wizard that can sufficiently hold and carry for us. Ceballos has some great attacking instincts but is still developing, made a couple of mistakes he needs to cut out fortunately without consequence. Guendouzi carries the ball for us but we need to manage him properly. If we can, I would think a loan deal for him to develop with regular playing time would be a good option. Torreira despite height is not… Read more »

He will be the only coach in the league who gets a louder cheer than the players. Cant wait to see him in Arsenal colors again. With an SC stitched onto the top left.

11 goals 9 assists this season for Santi. He still has magic

Bar the world renowned scientists sentence, this post was rather irrelevant. Forgive me blogs but I had to say this