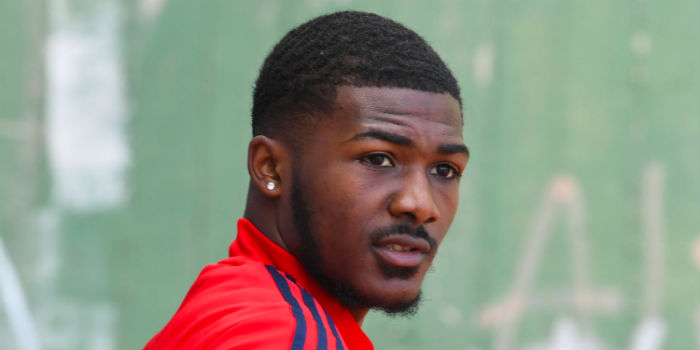 Mikel Arteta says Ainsley Maitland-Niles does have a future at Arsenal and that he’s not fielded the versatile midfielder as much as he might have wanted recently.

While the boss said last month that he’s been pleased with the way the 22-year-old reacted to being dropped in February, Maitland-Niles has still only played 82 minutes since football returned last month.

Earlier this week, David Ornstein wrote in The Athletic that the England under-21 international will now look to leave the Emirates in the summer having grown frustrated with his lack of opportunities.

While coy on the details of the report, Arteta was glowing in his endorsement of Maitland-Niles’ qualities and versatility but did call for more consistency.

“No, I didn’t discuss the reports with him, first of all, because I don’t read them,” said the boss.

“I spoke with the players about how they are feeling and how can we help them.

“He’s a player that can play in many different positions, we have discussed the things that in my opinion that he can improve or adopt to his game.

“He has incredible quality, he has every quality that you need as a footballer to play at the highest level. He needs to do it a little bit more consistently but he’s one that can adapt to any position.”

Pressed on whether he sees Maitland-Niles being part of his squad next season, he added: “Yes, maybe he didn’t play as much as I wanted him to play. But I played him in many different positions in some very important games as well.”

Arteta also confirmed that he’s keen on extending Dani Ceballos’ stay at the Emirates and that conversations are taking place with Real Madrid.

“That is a conversation that we are having to see what we can do in the future with him,” said Arteta.

“I always put the example that he’s a loan player but when you see his celebrations for every goal, the way he trains, how much he cares, his fighting. I’m really happy with him.”

I really hope he stays, think like Arteta could improve Maitland-Niles, his talent is obvious. Aside from that, I’d much rather a youth product was average than spending £15m on a 28 year old mediocre player from midtable to do the same job.

I’d rather start AMN over Cedric.

If nothing else his recovery pace is solid. While he can be a little loose with his passing, he can match up well with so many of the league’s pacy left wingers. I could see him as a high energy midfielder too, but that would mean him playing a lot tidier than he does now.

Too right, such an unnecessary signing. And 4 years! Makes me worried we haven’t learned a thing

It’s a cliché, but AMN’s problem is he’s too versatile. If he was focussed on RB/RWB, he would be 1st choice by now

Why so reactive Cultured? Cedric has barely played for us. No way we can judge him at all yet.

He has better understanding with Pepe

So far, Arteta likes every players but Guendouzi. He liked Ozil until he refused thet paycut. How will he build his own team? He just can’t be harsh to anybody who has a good attitude.

its diplomacy. He is not going to publicly bash players with good attitude, but what happens behind closed doors will be very different

If a good offer comes for AMN,we might sell him and Arteta will remind us of the ‘difficult decisions’.Great to see him managing these things effectively.

Ego’s can be managed provided the player adds a great deal to the teams performance. However neither Guendouzi or Ozil are worth the collateral.

It depends on who you have in your academy. Pep showed the door to Ronaldinho and Eto’o right away and these guys have quality imprinted into their DNA. He had Messi in his academy and Xavi and Iniesta ready to take over. He later did same to Ibra and neglected Henry.

i like AMN. actually tbh i think he’s better than bellerin in the last 2 years even though my heart loves hector. I like it that we have a core of youngsters and home grown talents – AMN, Willock, Nelson, Saka and Eddie. add good players like Bellerin, Tierny, Holding, Chambers, Martinelli and Saliba, and we have the foundation of a young talented team.

The right back position couldn’t be more open for him. I don’t understand what is stopping him – management or himself.

Maybe big parts of our fan base who told him again and again that he’s neither a right back nor Arsenal quality?

I like AMN but he never wanted to take ownership of the right wing position Wenger decided for him. Is he better in midfield than Torreira, Ceballos, Xhaka or even Guendouzi or Willock? He’s got to fight to secure the sale of Bellerin. That’s his future, to me.

That’s just not true. He gave an interview in which he said that he’s not a right back by trade and is just about to learn that position and therefore it’s logical that he’ll make mistakes on the way. And that he finds the criticism he gets quite harsh.
The fan base – although they were the ones saying he’s not a right back – then accused him of refusing to play there, what was complete bollocks.
If he’s willing to leave, the fans definitely played a part in that decision.

After playing in the position for 3 years, he said he wasn’t a right back by trade and is just about to learn that position and therefore it’s logical that he’ll make mistakes on the way.
Nice way to own a position.

the right back position is bellerins, now we have cedric as back up im guessing niles doesnt fancy another season on the bench or not even in the squad. Wouldnt mind seeing him given a chance in midfield, cant be much worse then the rubbish we have there at the moment

I really don’t get this view. Apart from
Auba, Hector is the only player in our squad to generate real interest from top clubs. He’s coming back from an ACL which really is 18m – 2y injury. He should be back to his best next season and if that’s the case, we have one of the best right backs in the world.

I’d love think he’d be back to his best, but Michael Owen never recovered his pace after an ACL in his mid 20s. Let’s hope for better though.

Medicine has come a long ways since then. Remember 20 years ago it would have been a career ender.

Referring to the title of the article, this wasn’t the impression I got from Arteta’s comments at all. AMN can barely get a look-in under Arteta, so if he does have a future then Arteta would have to come straight out and unequivocally say as much, otherwise it looks like standard pre-transfer window stuff.

I just wanted to see him in that defensive midfield slot. He is tough in the tackle and very quick. Currently Zhaka seems to get that place and he is too slow and ponderous to protect a fragile defence.

It’s a good news after all. I think as a supporter of Arsenal homegrown and given that the current financial problem we’re experiencing… Unnecessary foreign signings should be put as secondary. And, I always doubt on their commitment to the badge too.

If we are banking on him to be one of our future options in midfield, I can say this club is going in the wrong direction. I like AMn but he is way too casual with the ball to be playing in that area. As mentioned many times, fullback/wingback is his best option and natural position now, he has been playing on either side for 4 seasons++ now. If anything should he be retain, maybe he can be a potential surrogate for Kolasinac should he be sold. BUT at this point, he is not necessarily a better option. People need… Read more »

Lol I can’t see what all the debate here is about. Arteta’s comments are clear as day. He thinks AMN is a potentially top level player but he needs to be 100% committed all the time and cut out the slightly lax attitude he sometimes appears to display. In a squad as thin on quality technical players with top level athleticism as ours I am sure Arteta will be looking to work with and improve the player rather than get rid. If Dani doesn’t stay then AMN actually looks the most natural replacement of the midfielders we currently have

At 22 without a defined position, the only option for AMN is with a new club. That would be the best option for all concerned. The club has other options in Osi Tutu or Ben Sheaf to fill the role, they are asking of AMN. They are both talented in the 20-22 age group. If in a year or 2 they are not finding a defined position, they they can also move on and be replaced by another academy product. Would love to have a team made up of players from academy, but it does not always work out and… Read more »