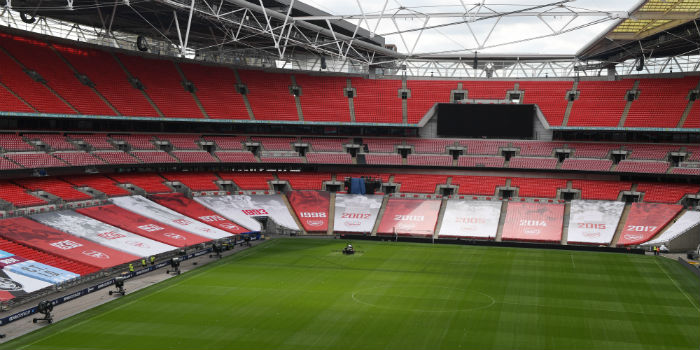 Thanks to Covid-19 we don’t have the schlep to Wembley tomorrow for our FA Cup semi-final with Manchester City.

Finally…something good has come out of this situation! We’re semi-kidding.

In our place, the empty seats in the Arsenal end will pay tribute to our record 13 previous successes in the tournament.

It’s a shame such legends can’t be called upon, we go into the match as huge underdogs having been battered seven games in a row by Pep Guardiola’s side.

On the issue of crowds watching matches, there has been a development today. Prime minister Boris Johnson outlined that subject to certain test events going smoothly, spectators could return to sporting events across England from 1 October.

In a statement detailing further easing of the current Covid-19 restrictions, he said: “From October we intend to bring back audiences in stadia and allow conferences and other business events to recommence, again these changes must be done in a Covid-secure way subject to the successful outcome of pilots.”

The timeline seems somewhat surprising given the murmurings that the whole of next season could be played behind closed doors. While we’re tempted to get excited, it’s pretty obvious we’ve got a long way to go before it becomes a reality. Even with the aid of technology, a second wave of the virus later in the year could see us back to square one.

In today’s press conference, Mikel Arteta, the man whose positive diagnosis sparked football’s suspension in England, was asked about the development. He preached caution.

“I think we have to be patient. I think we are all desperate to have our people back in the stadium and make football what it is again. But obviously we want to be able to create a safe environment for everybody to come and join.

“My opinion is that it will be gradual. The sooner the better but let’s do it carefully.”

1930 – Captain Tom Parker holds the FA Cup after beating Huddersfield Town 2-0 in the final at Wembley. It was our first major trophy, under the great innovator, Herbert Chapman.

1936 – Alex James captained the team to the 1-0 win over Sheffield United during a period when we were recognised as the best club side in the world.

1950 – Joe Mercer is carried off the pitch after a famous 2-0 win over Liverpool in another hugely successful era. The Gunners sported unfamiliar gold shirts and white shorts in the final.

1971 – 20-year-old Charlie George – born and raised in Islington – poses with the cup after scoring an extra-time winner to beat Liverpool 2-1, winning us our first ever league and cup ‘double’.

1979 – An ecstatic Alan Sunderland celebrates scoring a last-minute winner to beat Manchester United 3-2 at Wembley. The ‘five-minute final’ was one of the most dramatic ever, with United scoring in the 86th and 88th minutes, only for Sunderland to slide home the winner when extra-time looked certain.

1993 – David Seaman and David O’Leary celebrate with the cup after a game which was one minute away from the first ever penalty shoot-out in FA Cup Final history. Andy Linighan headed a winner against Sheffield Wednesday in a replayed FA Cup Final (2-1).

1998 – Ian Wright lifts the cup aloft in his last season at the club after beating Newcastle 2-0 with goals from Nicolas Anelka and Marc Overmars.

2002 – Ray Parlour celebrates after curling a shot past Carlo Cudicini from 25 yards as we cruised past Chelsea at Cardiff’s Millennium Stadium with goals from Parlour and Freddie Ljungberg.

2003 – A first half goal from Robert Pires was enough to beat Southampton 1-0 in Cardiff.

2005 – A fitting end to Patrick Vieira’s Arsenal career as his spot-kick won the cup with the last kick of the game. We became the first team to win the FA Cup via a penalty shoot-out. Jens Lehmann was our other hero, saving the crucial penalty from Paul Scholes.

2014 – Captain and now Head Coach, Mikel Arteta represents the most dramatic cup final win in our history. 2-0 down against Hull City after just eight minutes, goals from Santi Cazorla and Laurent Koscielny took the game to extra time before a fine finish from Aaron Ramsey sealed a 3-2 win.

2015 – Arsenal’s captain on the day and now Academy Manager, Per Mertesacker passionately celebrates during the emphatic 4-0 and unparalleled 12th FA Cup win against Aston Villa. Theo Walcott, Alexis Sanchez, Per Mertesacker and Olivier Giroud were on target.

2017 – A jubilant Aaron Ramsey celebrates scoring the winner in our 2-1 win over Chelsea, just a minute after Diego Costa had equalised Alexis Sanchez’s opening goal. This was our 13th FA Cup trophy – an unequalled record.

City is the underdog because of our in history in FA Cup. A team that is so inconsistent shouldn’t be successful in an elimination-based competition. I am pleasantly surprised of course.
On another note, Zidane winning so much with no evident quality as a manager tells me the board and Kroenke have the key.

As they say in Spain; Que?

Will they be blaring out awful music at a million decibels for two hours before the game still? It is proven to “help build the atmosphere” and all that

Totally with you there.

The fans are totally unable to create any atmosphere as you can’t hear a bloody thing from the person next to you, let alone other parts of the stadium. Songs selected for the teams are a joke too.

Mind you, I remember us being trolled at Old Trafford v Spuds – apparently “Donald where’s your troosers” was an AFC song ? – result made up for it though.

I am sure we were huge underdogs against Liverpool on Wednesday …

We certainly were versus Citeh in the last semi final too and in the Chelski final that year. Bring on Holding and BFG!

He was in the squad. And when the final whistle went, he tore off his tracksuit to go and join his teammates in the celebrations – such was his love for this club.

Who has the contract printing these massive signs all over England for football matches? What are they going to do with all these signs when fans are back?

Just seems like a lot of money for something so temporary. We could have bought Messi with that money 😉

I hope we don’t get more than 2-3 shots tomorrow. Any more would be greedy.

Same lucky ass win like against Liverpool would be fine with me!

We’ve won it the most and reached the final and semifinal stages the most. And yet back in the 80’s, when that lot up the road won it in ‘81 and ‘82, they had the front to refer to it as their trophy!

One for our most successful FA Cup manager too would have been fitting.

Totally agree. Arsene should have been featured.

This should’ve been done this for the finals. Doing it for semis shows a lack of trust in the team