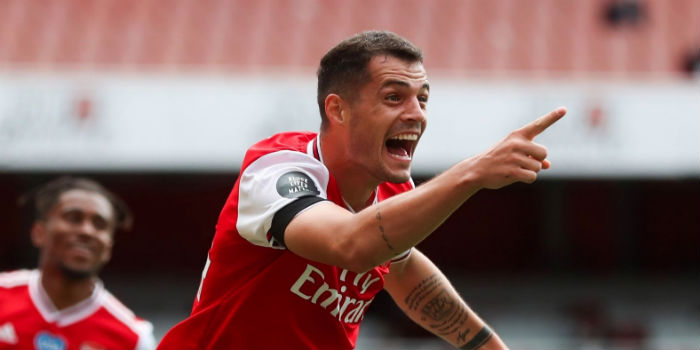 What a strange season it has been for Granit Xhaka.

Voted captain by his teammates in the summer, he fell out with the fans in December and looked destined to move to Hertha Berlin in January. Persuaded to stay put, he’s been picked by Mikel Arteta whenever fit and we look a better side for it.

That the Switzerland international has wholeheartedly bought into the boss’ philosophy, has earned him admiration from the Spaniard, who agreed that the midfielder has come full circle in the space of six months.

“Absolutely [he has],” said the boss after watching Xhaka score in the 4-0 win over Norwich. “He’s a player whose commitment goes beyond anything normal.

“He leaves every drop of blood on that football pitch every day and he does the same in training.

“For me, he’s a great example to any other team-mate, the way he looks after himself and lives his profession.

“I’m really happy that we could convince him to stay, give him another opportunity, learn from the mistake that he made and as well appreciate the player and the person that we have at the club, and support them.

“When someone has a difficult moment, we are right behind them. We can give them another chance.”

The way Arteta talks about Xhaka, you wouldn’t be surprised if he was handed the captain’s armband again at some point in the future.

I get the feeling that Arteta really likes his players. His positivity seems like a great basis for a working relationship and, dare I say, many of them might just be startibg to “click”, to use his word, under his tutelage. We might just have the next great manager on our hands here. Whether he can achieve all that he wants to with Arsenal will depend on the leadership and backing he receives from higher up the club, but we had better not fuck this up, because he will be a huge success somewhere else if it doesn’t work out… Read more »

Hair pie is splendid too. ?

Xhaka has grown on me in leaps and bounds. I remember against Palace when we chucked that armband to the floor and in the back you could see Auba picking it up.. well today when Auba was being subbed, he looked for Granit and it was so wholesome to see a different energy, Granit was beaming ear to ear (the goal helped too) receiving the armband. He’s not terrific or catchy; he has instead become a solid structure under Arteta which facilitates the team in looking better on the pitch.

You can see how happy they are about their goals today. I must say Xhaka and Ceballos looks good together. But It’s only Norwich.

Let’s see how they cope when we face,

Timorous Me
Reply to  OsloGooner

It seems like ages ago, so I certainly could be wrong, but I feel like we were feeling some of the same positives about the Xhaka-Ceballos partnership before the shutdown. I don’t know if it’s enough to want to keep Ceballos at his current market value, but in a world where money weren’t an issue, I’d be happy to see Raul buy Ceballos AND another talented, but different stylistically midfielder.

He has his limitations but he’s massively underrated. Every time he’s written off he improves his game and comes back better

Let’s judge him, and the team after the next 4 matches.

His most important limitations are his lack of real pace, and his extreme left-footedness. Most of his errors come from one of those two causes. Put him next to someone like Torreira, as Arteta did, and many of those problems disappear. If he were next to Kante (or a bit in front of him), he would look like a world-beater.

Could it be that he’s not as bad as we all believe, it’s just that he’s finally being used in a role that suits him? That would be nice…

(although, I suppose it wouldn’t explain the constant brain farts of days gone by…)

Actually, it just might: if you’re asked to do things you’re not suited for, you probably will make mistakes in that role. And once you have made enough of those, frustration and self doubt might appear and affect other aspects of your game too.

I’m loving this, Xhaka deserves the praise for taking the responsibility and working hard to get back on top of things after a horrible time for him.   It’s amazing how a lot of times you are a product of your bosses. As much as I am a staunch Wenger supporter, his last years were hardly fertile ground for a productive environment as relationships with fans deteriorated, and let’s not get started on Emery’s time (an overall downward spiral), while in Arteta’s short time in charge he hs shown that things can change and I feel are moving towards a… Read more »

Xhaka does like the captain’s band doesn’t he? Noticed the huge grin on his face as Auba handed it over to him.

It just goes to show how shit Unai’s tactics were. Where Emery system exposed all the flaws in the players, Arteta has deviced a style of play that makes them better than the sum of their parts.
Mustafi is looking decent, Xhaka’s lack of pace is not getting exposed as much, while our keepers don’t end up man of the match every game anymore. Let’s hope he can make us better with the support of the board

Do you actually watch the games? Mustafi and Xhaka were a disaster class against Sheff Utd. Mustafi got done for Brighton’s winner. They’re clowns and that will be proved time and time again when Arsenal play decent teams – not relegation crap like Norwich. Emery was dead right to bin them off – just like he was with Ozil, and Arteta better bin them off because there’s no Champions League with that pair playing week, in week out.

Except Emery never “binned” them off. He kept playing them in his shit team setup and caused them to be the lightning rods for criticism.
You know, it doesn’t make you a smaller man to admit that Xhaka and Mustafi are doing good under Arteta. Is your hate for them more powerful?

They’re not doing anything. As soon as Arsenal play anyone decent they will get exposed and as soon as Arteta tries to play a more expansive game, they will get even more exposed. Arsenal aren’t getting into the CL playing 5-3-2 to protect garbage players like Mustafi and Xhaka.

Its quite tiresome listening to all the praise given to the likes of mustafi and xhaka as soon as they have one or two decent games and dont drop any clangers.
we have been shit for 3 seasons because we are carrying these bang average players in the hope that after 4 years they will suddenly become something special. We need better players in key positions or are we happy with midtable trying to scrape into europe.

Finally someone with some sense

Big respect to this guy, I was so sure there was no coming back after that Crystal Palace game. Took it on the chin & proving us wrong, what difference it makes when hes actually played to his strengths. Kudos to Arteta for that.

And who was handed the captains armband at the close of the last 2 games…Granit!

“Learn from his mistake.”. Hmm. Given his reaction at that time, wonder what Xhaka makes of that statement.

Given that statement is coming from someone who has worn that very armband, and the number of times his teammates keep trying to hand him the armband, I’m betting they’ve discussed it and he would probably agree that he should have handled things differently.

If Arteta did try to give him the armband permanently, Xhaka would have to address it again. And I’m sure he would show his remorse.

Lack of Perspective
Reply to  Orion

I still dont think it was all that bad. A mistake yes. But our fans are entitled as fuck too.

It really isnt a huge deal.

EZD
Reply to  Lack of Perspective

For me, it was his lack of proper apology afterwards (after he had time to cook down) that was the problem, and the way he blamed the fans in the stadium for what the internet trolls write.

Anyway, glad he’s turned it around

have we finally managed to unlock the mystical talent that is xhaka?
definite no to capitan though. 1st choice Auba. 2nd choice Leno.3rd choice musta… kidding. ok bye.

Jury’s still out on Mustafi (are we ever gonna trust him to not Mustafi it up?) but credit to Xhaka for turning things around under Mikel. Always signed him for Arsenal on FM before we signed him, but I’d have been happy to see him move to Hertha in January but now he’s a big part of our starting XI.

As you said, Blogs, he seems to have bought into Arteta’s philosophy and is making it work. I certainly wouldn’t begrudge him taking the armband again if he keeps working hard.

Anyone who has played football intuitively knows what Xhaka brings to a team. Also crucial is how and who he’s paired with in midfield.

A Xhaka – Partey partnership would be magnificent.

Add a world class centerback to that setup and we would be complete.

We are not really that far off from being serious top 4 contenders, especially with Arteta.

What about a Xhaka-Guendouzi relationship? Would that work?

being top 4 contenders is the limit of this clubs ambition unfortunately.

Yes! Xhaka will be an even better captain having fine through this – and having shown everyone what he brings to the squad and the club. If PEA leaves, the captaincy will be in good hands.

Xhaka improve his work to the better

Oh, yeah. Xhaka the Captain–we’ll see how that works. I’m going to have to agree with Hi-Brid. Arteta DOES like his players. It’s obvious in the way he coaches them and speaks of them in interviews. Let’s take our Example Numero Uno:Matteo Guendouzi. Admit it–Guendouzi has tried Arteta’s patience a few times before. It was disciplinary reasons why he was left out for the last few games, and if Arteta wanted to really make a row, he could have went on and on and on about the Frenchman. He didn’t. Let’s hope to see Guendouzi and Arsenal take the three… Read more »

It is impressive how Xhaka has managed to keep his feet on the ground and regain his place in the team. And yes there is no doubt that Arteta has improved players like Mustafi and Xhaka. But I have never, in all my 50 years of supporting Arsenal through thick and thin, have ever witnessed anyone disrespecting the fans and the shirt in the way Xhaka did. He’s good but not great. I don’t blame Arteta for sticking with him and trying to talk him up as he needs all the resources he has right now. But I, for one,… Read more »

A lot of them deserved more disrespect than they got.

Totally agree, unfortunately it shows the lack of disipline at arsenal and the shit attitude some of these players have.Id like to see a clear out but its Unlikely as i doubt the transfer market will be that active. I dont see arteta being ruthless enough to clear the dead wood, the resigning of luiz doesnt bode well for moving players on. Saying that it might take a few windows to get rid of some of the dross.

Xhaka looked good against the bottom team in the league.

If he still looks good after the next 5 games against very tough oppo then I’ll start getting excited about him.

I think Arsenal fans have forgotten what a good midfielder plays like.