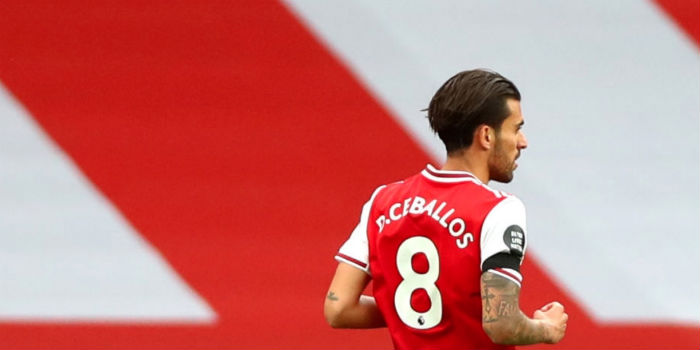 The match winner at Sheffield United on Sunday and one of our best performers in the 4-0 win against Norwich this evening; it’s been a good week for Dani Ceballos.

Mikel Arteta certainly likes his compatriot’s current output and thinks the midfielder has what it takes to grease the cogs of Arsenal’s midfield.

As things stand, he’ll only be doing it for the next five weeks, then he’s due to return to Real Madrid. It seems unlikely we’ll commit to a permanent deal when his loan ends, but interestingly, the boss hinted that there has been contact with the Bernabeu.

“Both clubs have been in communication,” said Arteta in his post-game press conference.

“I really like Dani and what he brings to the team.

“When I joined he wasn’t available because he had a difficult injury, but he’s understanding what we’re trying to do really, really nicely and he has big personality to play and take the ball in any area of the field and give us the continuity that we need as a team to control the games better, but as well without the ball.

“The running that he’s putting in, the tackles, every time with the interceptions, his desire to win that ball back and help the team, he’s improved so much and he looks a really good player at the moment.”

Without a crowd at the Emirates, it was very noticeable how much time Arteta dedicated to coaching Ceballos throughout the victory over the Canaries.

His words of wisdom certainly paid dividends. The midfielder completed 57 out of 61 passes (93% completion rate) of which 19 were in the attacking third*. Particularly eye-catching were the passes inside the Norwich full-backs which freed our wide men and a beautifully dinked cross that Lacazette really should have headed home.

All in all, a decent showing. Here’s hoping he can continue this form into the final games of the season. If he does that, perhaps another 12-months in London could suit both parties.

At the moment… nice qualified praise!

VAR will solve the problem
Reply to  Adiddledog

Here’s to hoping his performances become worthy of his Song!

Was really on superb form first half today.   excellent feet and great timed runs into the box, passes were crisp and dangerous.   Making a case for us to put more effort into convincing him to stay.   And there is merit to retaining him. Much like with Mari and Cedric (also a good debut today), maybe not so much Luiz, it pays for Arteta to keep players he has been working on for a while now rather than have to start from scratch.   Ceballos energy and ball retention like today next to Granit makes for a more… Read more »

After the Brighton game I worried that his head was already back in Spain, but he’s put some really good performances in since. He has superb technical ability, a real engine and is is versatile enough to play in a 2 or a 3, or 10 and out wide at a stretch. If he improves his consistency he’ll be a top player, either here or, more likely, elsewhere.

He played in a midfield 2 today with Dhaka and was of the best players on the pitch? Please elaborate.

Not a 2 in 4-2-3-1 I reckon as I think he will be exposed a lot. Played really well with a back 3 though as he likes to get forward and be aggressive with the pressing.

Please don’t spend our limited summer budget on this guy

I would absolutely be behind an additional 12 months of today’s Dani Ceballos. His debut against Burnley was also impressive.

The question is can we fill the games in between with the same version? We’ll never have another Santi Cazorla but perhaps Arteta can guide him in that direction.

I like his game but he doesn’t offer much physically. Today was a nice possession game against a team already relegated. You can’t really imagine him doing much against a Pogba/Bruno type midfield of Man U, for example.

I’d offer 25 million Euros for him at most….

Send him back and bring Marco Asensio

if that works then can we get verane or ramos instead? 🙂

Any coincidence his form has improved now that Real and Arsenal don’t want him? We’ve seen other players do this before to earn a new contract/drive interest. They find cruise control as soon as they sign their next deal

That is very true, it can happen, but that also applies to every other players anyway. Honestly, I am not too worried about Ceballos, the one that we should keep an eye on is Saka. He just signed his long term deal with us, and so many of his predecessor had then never reached their potentials, look at Walcott, look at Chamberlain.

Timorous Me
Reply to  Nick

Maybe? I mean, he’d been sitting home not playing for quite some time. Can’t expect everyone to get up to speed at the same pace. The important thing is that he has found his sharpness again. Now the big question will be if he can maintain it, especially against stiffer competition.

Lets wait and see after the Wolves game if he starts. Too much negativity when we lose and too much optimism when we beat shit teams.

Bossman Bill
Reply to  The Arsenal

When we signed him at the summer I was reluctant because he would take playing time from our young midfielders: Torreira Guendouzi Willock.

He may had a good week, but my opinion hasn’t changed. The rest of the season looks like preseason for 20/21. Why should we steal playing time from our players to play Ceballos?

Arteta is a master of midfield himself, so you couldnt ask for a better coach.

Dani probably also knows that Arteta sets his teams up with teamwork and work ethic in mind and every player will have a chance to show his good work, as long as it is in each framework for each particular opposition.

The overall ethos seems to really have brought out the best in our younger players. Kudos to Mikel.

Obviously wtf do I know but is there a case for danis loan status having a destabilising effect on him?

A loan player from Real who is unsure of what his future holds with one foot in North London and one in Madrid.
No doubt that would mess with the mindset of a young player

Yes guys the doctor is in session

Nothing special about this guy. continue with this squad without adding proven quality in midfield and defence and we are going nowhere fast.