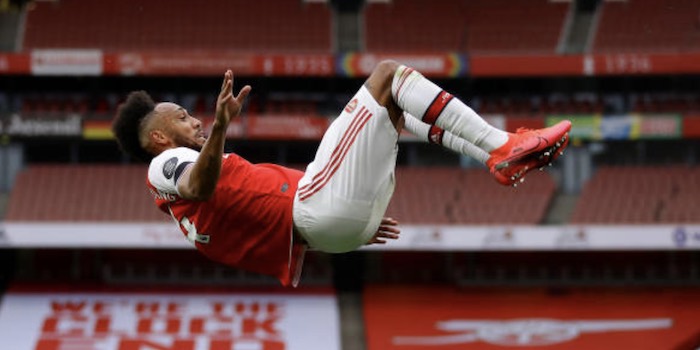 After his two goal salvo against Norwich at the Emirates this evening, Pierre-Emerick Aubameyang became the fastest player to reach 50 Premier League goals in an Arsenal shirt.

He beat the record set by a certain Thierry Henry, and helped the Gunners to a 4-0 win over the relegation threatened Canaries.

The 31 year old was asked about his contract situation afterwards, speaking to BT Sport, and in his post match press conference Mikel Arteta sounded a positive note about the captain’s future.

“What he’s achieved today, to to score 50 … in the history of this football club, tells you everything about his mentality and the way he works every day on his finishing, on trying to help the team,” said Arteta.

“He’s decided to be better and better every day. So hopefully we can keep him here for a longer period.

“A player that is able to score as many goals as he’s done in that short space of time tells you everything about the importance that he has for us.

“We need players that can make the difference at any moment in the game every three days, in different competitions, and that’s a big test for him.

“He’s done that at different clubs, he’s willing to stay with us, he’s really happy where he is and can see what we’re trying to do. Hopefully he can evolve as well in some parts of his game that in my opinion he can improve.

“We are pushing him every day towards that. I am positive that we can keep him here for many years but things have to progress.”

Arteta will leave it with the football executive committee to make it happen, but it sounds like nothing will be decided until the end of the season.

After the good news regarding Bukayo Saka signing a new contract, what we’re trying to achieve under the new manager would be helped massively if we could keep Aubameyang.

Can we know what we’re trying to do? Because I can’t quite tell yet.

Kanu Believe It
Reply to  SFGooner

I can see what Arteta is trying to do, just dont know about the board or the recruitment pricks

Here for you if you really care to see

I would be thrilled to keep him because how are we supposed to get better by losing our world class goal scorer ?

But keeping him should not be at the expense of strengthening the midfield. I think Thomas Partey would be more important for the team.

This back 3 has got to stay. We simply don’t have the CBs to go with a 2 and we actually have pretty decent wing-backs/attacking wide players.

More of this please. There’s a certain day we’d all like to celebrate this season!

Unlikely IMO.   Auba Golden boot will only attract teams in Europe/CL.   he’s 30yrs now and on final season. It’s his last chance on the big stage (CL) and to win silverware not to mention a big pay package before retirement.   I won’t get my hopes up.   BUT Laca imperative to keep one more season and then Martinelli and Nektiah to me get the nod competing for a spot up top. Martinelli also useful of course left side ala Auba position.   Still think we need one more player to come in in attacking midfield either a… Read more »

With potentially say Laca, Martinelli and Nketiah next season (should Auba likely go), would be good to have a back up older striker maybe on a loan or swap deal for a season as the younger Strikers hopefully find feet (and back of net)

Yamolenko did good for west ham today but highly mercurial. Kramaric another interesting player at 29yrs, the older Kalinic at 6’2 also a useful different weapon to have off the bench.

Much depends on on goings in market and we will have less dictate so we need to feed carefully off of others’ moves.

I think he will sign if we get Europe League

Eddie has only got two years left on his contract now.

We should be extending him too this summer, other clubs might come sniffing since he’s doing do well and getting a run in the first team.

The way Auba said “sign da ting” in the BT after game interview than laughed. He’s one of us ♥️

Auba has a choice, he can go join a top team who automatically wins trophies, like Juve, or stay and take us to the next level. In the first instance he becomes a footnote in history, in the second he becomes a legend, with a home for ever. It’s more than money, he’s happy here, we love him, his manager and team mates love him, look at Griezmann at Barcelona, does he want to end up like that? If the recruitment is right in the summer and he can see intent, I think he will stay.

The cynical part of me thinks this is just talk to raise the price on Auba, Wenger used to do it all the time.