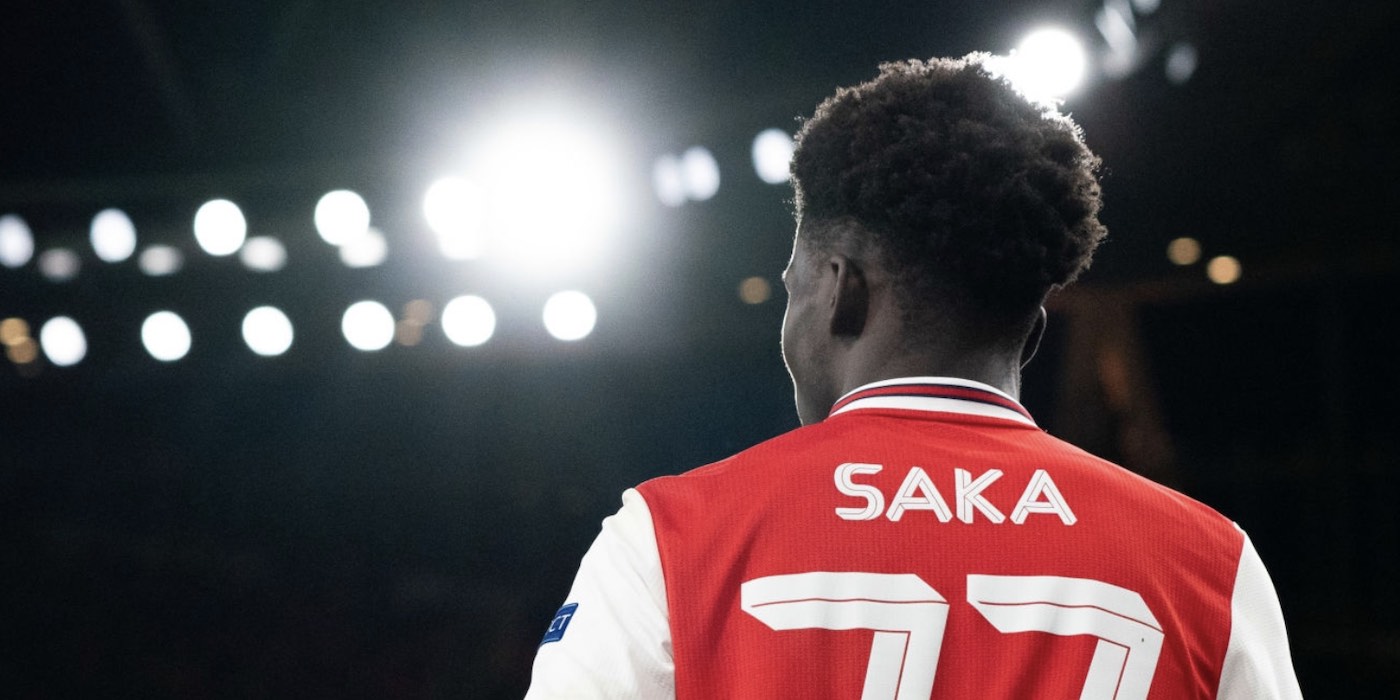 Arsenal have confirmed that Bukayo Saka has signed a new long-term contract with the club.

The 18 year old has had a breakthrough season with the Gunners, and with just 12 months left on his previous deal, there were obvious concerns about his future.

Now though, he is set to develop in red and white for years to come after he put pen to paper on a lucrative contract, just reward for his outstanding performances throughout this campaign.

Mikel Arteta told the official website, “Bukayo is a talented and intelligent young player. He has impressed me with his work ethic and attitude to learn and adapt, and it has paid off in his performances.

“I am excited to continue working with him to develop him further, and for him to help us achieve our goals.”

While Technical Director Edu said, “This is something everyone involved wanted to happen and we are delighted that Bukayo has signed a new long-term contract.

“He’s making great progress and is one of a number of young players who have developed through our academy. This is so important for us as we move forward as a club.”

So far this season Saka has made 33 appearances in all competitions, scoring 3 goals and creating 11 assists.

Congratulations to him, and it’s great news for Arsenal and Arsenal fans, and it’s going to fun watching him develop even further over the coming years.

hopefully at the white shite lane?

Wasn’t abromavic supposed to be tried for war crime or something? What happened to that

Thank Dennis for that!

Who gave this a thumbs down?!

Mmmmmm I feel the warming thrum of relief.

I watched a YouTube highlight video of this kid, and I think this might be a good call

Ooof, I was afraid he wouldn’t sign. Great, great news. One of best young players in the league.

He’ll be just 38 then, still sweeping through centre midfield elegantly.

arseblog
Author
Reply to  Will Kidwell

Artetas Assistant
Reply to  Will Kidwell

His agent would prolly have refused more than four, renegotiate in two .

I mean 4 to 5 is quite standard especially in modern football. It works out for both the team and player if either of them worse during the time the separation won’t feel severe.

Some would say that’s how marriage could work

He’s the most attractive 18 year old in world football

So he has signed a 3 year extension. Which means we’ll be doing the dance in 2 years time.

When that time comes around, who knows which people are involved in the dance anyway? Or if it’s Gangnam style or Charleston?

Yes. And he was contracted for 1 Year previously. So he has extended his stay for 3 years. The fact that his terms are improved is lovely for him but makes no difference to the Additional length of time he will be at the club.

Why are you making this into a negative?

Thank effin God. Cannot wait to see him develop with Tierney and our young crop of forward talent over the next several years. Truly something to be excited about.

Saka has been the most positive development of this pretty rotten season, great news we got the extension done without too much fuss!

Thats the kind of news that lifts your spirits, let’s get the win tonight and celebrate.

Great news for sure…any idea on how long is the new contract?

Good bews that he’s signed. Would have preferred a 5-year + 1 year option.
Hope we offer him another ocntract by end of next year if he does well otherwise it’ll be the dreaded 2-year thing soon

Whew. Great news. Hopefully they can use this as incentive in getting Auba over the line. (I know, I know, but I can dream can’t I?)

The future is bright

Raul Sanllehi, you are safe for now. I can’t imagine what would happen to Arsenal’s reputation a club if Saka went somewhere else

If he continues to kick on we should open negotiations in a year.

Brilliant! Now play the youngsters! We’re not exactly going to win a whole bunch of trophies this year or next, and I remember the old cup games you’d love to watch because the youngsters were playing. Back then, they lacked the polish and finesse of our first team squad. These days, our first team aren’t exactly “entertaining” to watch, so .. yeah, I know. Naive. But eff me I’d love to see our team in 2 years if we actually played the boys.

He seems to have a mature head on his shoulders and doesn’t strike me as the type who will let money go to his head. He’s at the best club to nurture his talent – he’ll get plenty of game time. But it’ll be interesting to find out how much he’s getting paid compared to others.

Me thinks 4yrs for a player of such potntial is not good.By the time we sort n settle our squad with Arteta, 2yrs remainig on Baka’s contract…uuurrgh another headache. Jst sign him like U did Belerin …6yrs

You need 2 to tango. Looks like he’s taking a Walcottian approach. One more reason we should have offloaded that waste of DNA earlier.

This is good news! I really do have high hopes for him

I was more concerned about Saka signing long term than keeping Aubameyang. The consistency of his performances have been staggering for an 18 year who has played for the most part out of position.
Now let’s whoop the Budgies tonight!

Great news!!!
The ornacle spot on as always. Hopefully the Partey dream gets real..

A four year deal is good for Saka not for the club, coz in 2 years time we will need to renegotiate. All in all, a good development as we have him on the books.

arsenal don’t know how to negotiate, imaging is four years we were labouring for since when Mactominy signed five years to man u just few days ago.

SarcasmB0t
Reply to  Once a gunner

What you’ve written is not comprehensible.

A make A great A

So then let’s go overboard!! Saliba and Tierny left side of defense, Saka left Lcm, Martinelly left wing!! wow!! so much talent and above anything
hella “Hart Wüörk”!!!

I think A. Cole almost crashed his vehicle when offered what Saka currently earns in an week for a session’s work so not before time I’d say. Excellent news.