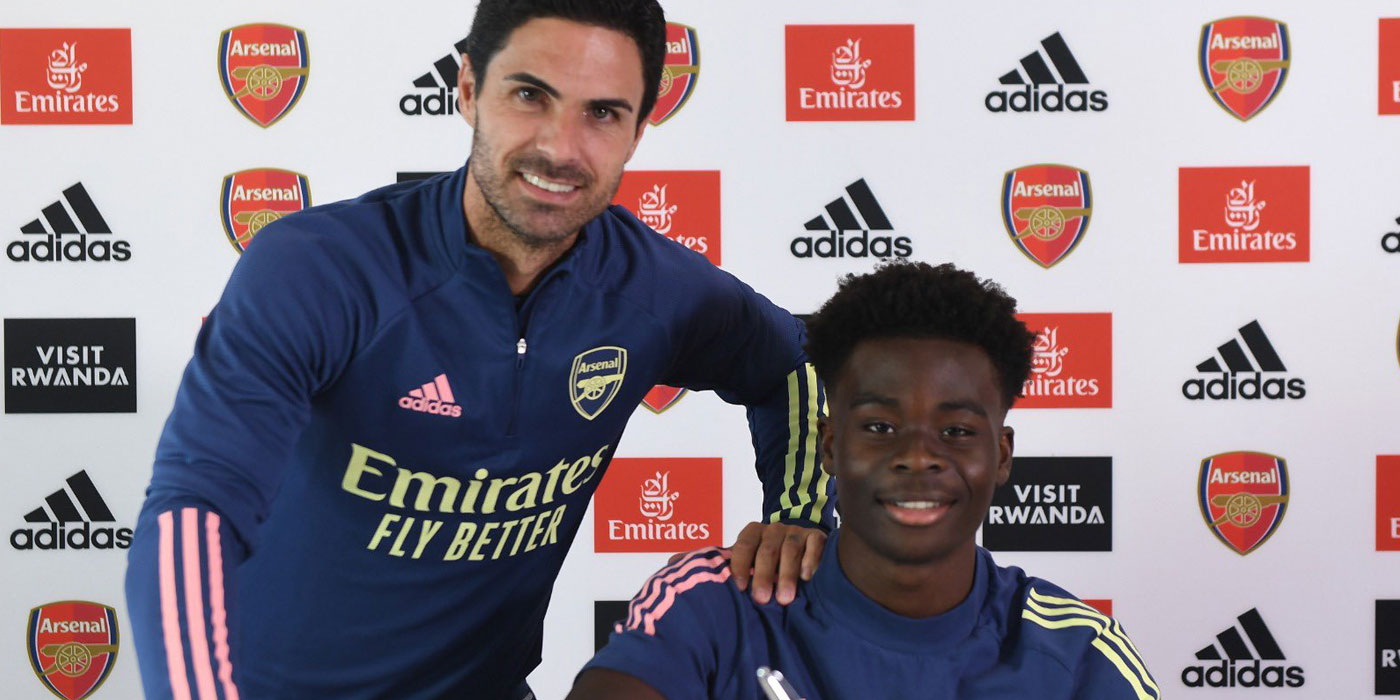 Bukayo Saka signed a four year deal with Arsenal today, which means his future at Arsenal is secured until 2024. This is a new contract by the way, not an extension to the one year left he had on his previous deal.

It’s big news for us, the club, and for the 18 year old himself, and it’s a measure of the young man’s character that he actually took some time to apologise for the process taking so long.

I mean, there’s no need for him to do it, we know these things are complicated and can drag out for all kinds of reasons, but it demonstrates an awareness of how he’s regarded by the supporters, and the relationship he has with them.

Speaking to the official site, he said, “I just want to say that I’m sorry it’s taken this long, you know. I’ve seen how much it means to the fans.

“Over this time I’ve seen how passionate they are, how loving they are and it just means everything to me that I can make them happy. I just hope I can continue to do that.

“I want to thank them for their ongoing support. It means a lot to me. I hope this news makes them really happy that I’ve signed and extended my contract, I’ve signed da ting, made them happy!

“I just promise that me and the team are going to try, going forwards, to give them much more to be happy about.”

For those who don’t know, long-time Arseblog friend Roxy Harris (@RoxyArms) wrote a tune called ‘Sign da ting!’ when there was a contract on offer to Theo Walcott … 8 years ago!

Eventually, Theo signed da ting, and now Bukayo Saka has done likewise. Don’t worry that da ting isn’t as long as you might have liked, this is fantastic news for our future and hopefully for his too.

Arteta on a poor first half, Saka and Leno’s saves

Made me chuckle, as a long time Arselurker

This is fucking great news, the most important contract to get done IMO. Shows we can keep our talent and have faith in them.

Very nice news. May you score a goal today.

And no need for sorry, it’s the same thing we did with our employer, when he wanted to retain us, squeeze till the end.

Lol I respect the shout out for the Walcott song creator.

I always hear it in my head when I see “sign da ting” written.

Legend in the game.

As long as the outcome is better than what we received after Walcott’s repeated interminable procrastinations..,

What a guy ! Him , Kieran, Nketiah ! Happy days are around the corner!

Excellent news! I can see a great future for Saka.

Was expecting the worst not gonna lie. Phew.

Yes, I honestly feared the worst until yesterday (or so) after reading Arteta’s soothing assurances.
Thank God that it happened at last.
It’s both soothing and assuring.
Now, we need the 3 points today to celebrate in full.
Get it done boys!

Top lad. Will give the squad and the fans a boost.

Amazing news, now give the boy the no.7 jersey!!!

What a humble lad! Arsenal captain in 5 or so years!

I’m going to put my neck on the line – he is a future Arsenal great. I have a reasonable record on this – correct with Tony Adams on debut, and PV4, but a bit out on Jack Wilshere.

One could not have legislated for Wilshire’s injuries otherwise I’ve no doubt he would have become an Arsenal legend. A sad loss for Arsenal and England.

That’s not bad there, Tapps, not bad. https://www.youtube.com/watch?v=k5hWWe-ts2s

Great work by the back room and Arteta to show Saka a future with Arsenal.
Now let’s get the Officials to understand what ‘taking a knee means’.

Let’s just hope that as a club we make enough progress that he’ll sign a new one without fuss in 2 years time!

Anyone have any idea about roughly how much he’ll be earning?

I’m guessing it’s the lower end of what he asked for plus one pound.

Now which just need Abu to do the same and sort out the Ozil mess.

Diaby is back in?!

Great news.
Hopefully the inclusion of Walcott in the blog will not condemn Saka to have similar career trajectory…

Someone please set a reminder for Raul and co so they don’t forget to renew it again before there’s a crisis.

I am thrilled! He is the future of this team. Go Saka!!

This is 2020. I think it’s brave enough to have signed until 2024 when we’ll no doubt be in a post-apocalyptic dystopia featuring Jose Mourinho as the lead villain.

Compared the current climate that actually sounds like a nice place

Good to know. It can only get better saka

This lad is going to be big. Just happy it’ll be here. Coyg

The song and video are instant classics, but seeing Walcott’s name near Saka’s makes me a bit vomity.
If memory serves, he was awesome right before he signed (da ting), and never much good after.

Not sure he was ever awesome.

One of our best players already. Really smart footballer. Great at reading the game, finding space, picking the right pass, at such a young age.
Delighted he has signed.

Very good news, let’s get Dani on a deal aswell as we need a guy with his skills to break it up, bellerin, saliba, and another cf with the more improving Tierney at back with chambers coming back we might just might have a decent defensive unit, our midfield still needs steel, one decent buy could resolve that with torreria coming back, up front Laca needs a new club, Auba needs a new deal and let martinelli when he comes back to have faith this lad will be a 20goal + player, Nketiah willock saka and the most improved xhaka… Read more »

Better late than never!! A great day for the Arsenal ?

In the not too distant future…….

“Time is running out here at the Grove ,but wait..
Bukayo has picked the up the lose ball, he’s jinked past one, two, he nutmegs the 3rd, he’s baring down on goal………..

Arsenal have won the league and relegated tottenham!!!

And it was that boy saka again.
He can now place the premier league trophy next to his ballon d’or

What a glorious to be a gooner! “

The successful surgery on Martinelli’s knee and Saka signing new deal are the two biggest reliefs I’ve had in regards to Arsenal for a long time.

4 years is a decent extension. Couldnt of asked for much longer than that.