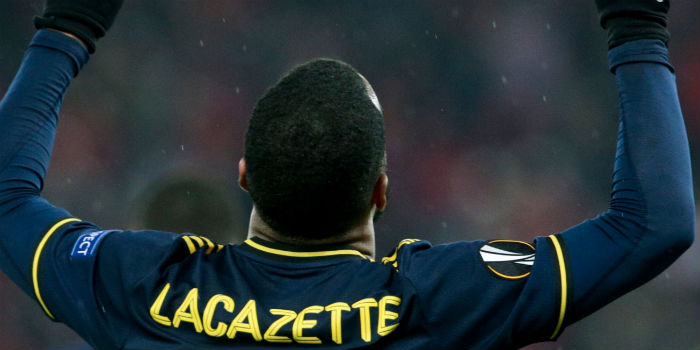 Over the last few months it feels a bit like Eddie Nketiah has overtaken Alexandre Lacazette as Mikel Arteta’s first choice for the centre-forward position.

The Frenchman started in the FA Cup on Sunday, but Nketiah started the league games against Man City and Southampton, and is expected to get the nod for this evening’s visit of Norwich City.

Nevertheless, the Arsenal boss says he’s pleased with what he’s getting out of the more senior man, but insists he has to deal with an environment in which he has to compete for his place.

“You know at this club, that you’re going to have competition in your position,” said Arteta.

“Just look at the work he did the other day, it was incredible. I showed them all the clips.

“The goal, he goes to press, the way he links up, the penalty that he got for us, his attitude is really, really good, so I was really happy with him again.”

The 29 year old has 9 goals to his name this season, but you have to go back to February of last year for his last strike away from home – a worrying run of form for a player of his experience.

His recent marginalisation has led to speculation he might look to leave, or indeed be sold by the Gunners, but as you’d expect that wasn’t something Arteta was going to go into any detail on.

I think we have speculation about the 24 players I have in the team!,” he quipped.

“I can’t keep guessing whether what I’m reading is true or not.”

AKA “Arteta unhappy with Lacazette”

atletico rumors for laca is ridiculous.Atletico already have costa and morata.

Comment off the topic of this news blurb; that piece on Theo Foley on the main page is really really excellent.

Totally agree. Theo Foley was an absolute legend and the perfect arm-around-the-shoulder ‘good cop’ to balance out George Graham’s ruthless demands in training. May he rest in peace.

When he’s on form, he’s awesome.

not good enough. Arteta needs to get rid and use to invest in squad.

17 goals in his first season, 19 in his second season plus named Arsenal Player of the Year. Currently on 9 this season, but all players suffer dips in form. I’d say he was worth keeping.

Short term memories from some fans. I definitely back Arteta to get him fully prepared and back on form for next season. He’s prime age for a striker and if we can get the team and midfield functioning again he will be banging them in again.

Another world class talent who we need to get behind and support. His and Auba’s goals in the last couple of years have been one of the few positives we have had – and would have counted for more, but for our circus of a defence. Would be great if this lad can get a few under his belt and get his confidence back. When he’s on form, he’s an awesome player.

Vintage Arteta. One can almost second-guess his likely response to a typical English journalist’s question by now. I so love reading his interviews. English language is not his first language, yet he’s almost so eloquent in speech (like his former boss, Wenger). Best wishes Boss.