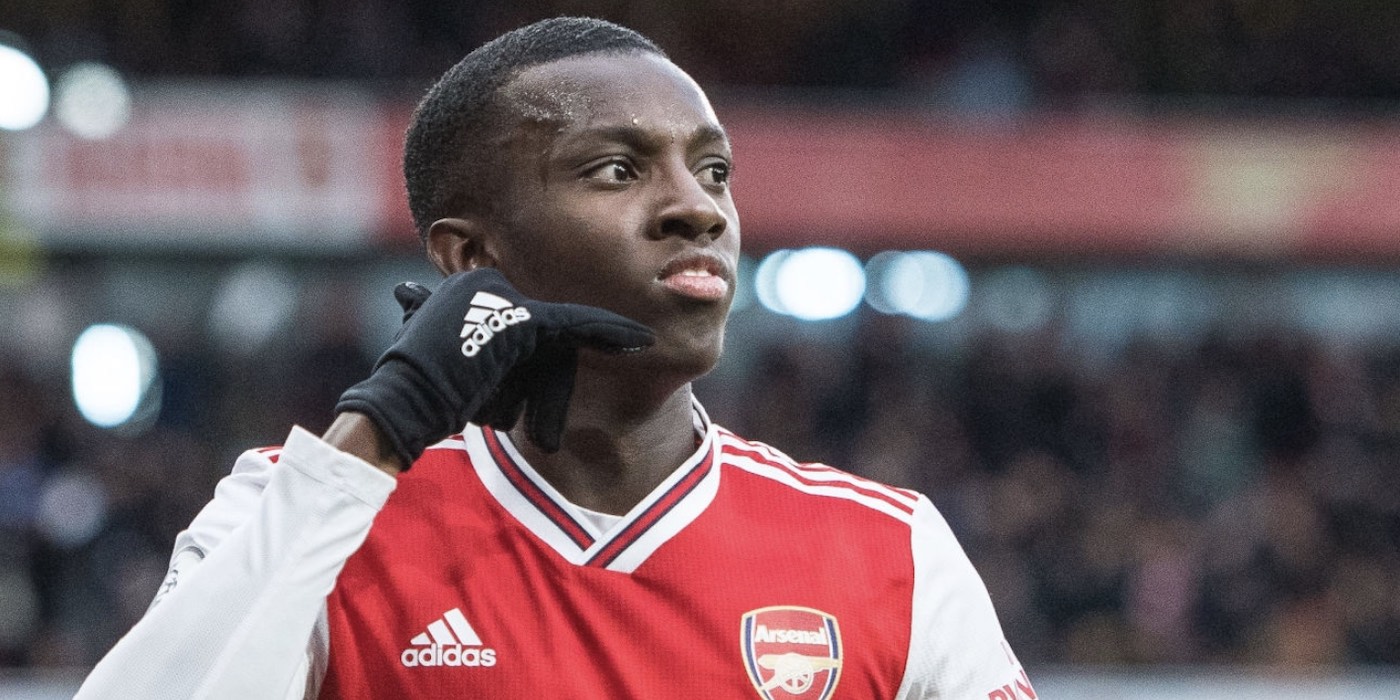 When he signed a season-long loan deal with Leeds United in August, Eddie Nketiah probably didn’t envisage leading the line for Arsenal by March.

Despite bagging a few goals at Elland Road, Marcelo Bielsa’s preference for Patrick Bamford led the Gunners to recall the England under-21 international and he immediately set about impressing new coach Mikel Arteta.

Instead of returning for a second spell in the Championship, the boss showed faith in the Academy graduate’s qualities and he’s since featured 11 times, scoring four goals.

As you can imagine, Eddie is incredibly thankful for the opportunity to fulfil a childhood dream.

“It’s amazing to be out there and getting regular minutes,” he told beIN SPORTS.

“I’m feeling really good and I’m learning a lot by getting that exposure. I’m grateful for the opportunity. We’ve got back-to-back wins and a semi-final to look forward to so we’re pushing forward and looking to build up some momentum.

“I’ve always tried to look long-term and look ahead and have something to work towards and since I was a kid that’s always been to break into the Arsenal first team and really challenge for a place.

“This season, I’ve been able to do that. That’s what I want to keep doing, learning hard, keep improving. I’ve got a wonderful manager and wonderful teammates around me to learn from. The environment is there, I just want to keep pushing and look forward to hopefully getting more minutes as a player.”

Nketiah’s recent goal against Southampton – when he chased down keeper Alex McCarthy to intercept a pass before putting us ahead – earned him big praise from Mikel Arteta, who has been trying to drill home the importance of defending from the front.

While things didn’t work out as planned at Leeds, the striker credits their Argentine coach Marcelo Bielsa for opening his eyes to the importance of pressing high.

“He’s a very demanding coach,” notes Eddie. “Every day, he demands a lot in training and from his players on the field all the time. He does a lot of one-to-one behind closed doors going through reviews of games and stuff. I learnt a lot.

“If there’s one big thing I took away, it’s the importance of defending from the front and off the ball how influential that can be on the way the whole team plays. I’d definitely say that’s a big thing I learnt from him.

“He’s a very different and interesting character. He’s a great manager, he’s obviously so demanding of his players. I learnt quite a bit in a short space of time, which I’m obviously grateful for.”

The one-to-one tuition has continued at London Colney, with Nketiah very impressed by Mikel Arteta’s attention to detail.

“He’s a very cool and collected guy,” says Eddie. “He’s a great manager. He’s got a bit of everything. He’s tough when he needs to be but can also put an arm around you and be supportive as well.

“For a young player he’s great because he’s very specific and detailed in his coaching. He’ll take that extra time out to go one-on-one to go into depth and detail. It’s amazing to have him around. I’ve learnt so much from him already, I’m looking forward to the future and working under him.”

Arteta isn’t the only one passing on advice. Anybody who follows Ian Wright on social media will have enjoyed his enthusiastic support of Eddie during his time away from the club. The youngster later revealed that the club’s second-highest goalscorer regularly shared feedback.

“He’s been really good for me, he’s helped me a lot, on and off the pitch,” says Eddie.

“He’s such a nice and bubbly guy to have around. Whenever you speak to him he lights up the place and brings positive energy.

“The best advice he has given me is to believe in myself and to work hard. There’s never an excuse not to work hard and to work on your trade. Even if it’s finishing, staying out and doing extra, putting in the extra work.

“Speaking to him you see how much he worked even when he was at the top. It shows you, you can never get complacent. You’ve got to keep working hard and sharpening your tools.”

You can watch the full beIN SPORT interview below…

Commenting for lack of commenters

Great to hear, and I really hope these boys come through together, we have some special talent at the club. Young players with a young manager is an exciting prospect

In Mikel we trust

If Eddie is able to make the step up to Top 4 class PL striker we are set. With him, Martinelli, and Pepe banging in goals for fun for the next half decade

Love Nketiah. His movement is outstanding and his interlink play is also very impressive. The kid exudes confidence and has shown he can lead the line for many years to come.

Honestly, I was skeptical when he was recalled but it’s worked out nicely for him and for the club I would say. Can’t wait for him to lead the line for us against Leeds next season.

He is s great talent born to score. If he starts we have to have tactics to play to his strengths. He needs to stay up front.

Definitely the future. The thing is not to expect too much too soon from him. I think Arteta has, generally speaking, handled him very well. Definitely deserves to be in the match day squad now, whether starting or on the bench. At the moment, I’d be inclined to start him against ‘easier’ opposition and keep him on the bench for the bigger games. Great to see Wrighty taking him under his wing. He couldn’t ask for a better mentor. Keep up the good work, Eddie.

When we generally say, the manager would have seen something, known something in/from training what we don’t know. It really is true.
When he was stopped from going on loan, I was wondering if he could step into the team. But Arteta indeed had seen something!!!

Eddie is a very intelligent operator, there’s no doubt my mind that he will go on to be a very good player.

Goes to show there are still some really good people connected to the club who actually care. Per, Wrighty, Pires(?), Arteta and some others are really positive influences in and around the players. I was thinking yesterday about some of the transfer business Raúl and co had done (and been criticised for). To be fair to them, they’ve brought in Pepe who who is really starting to impact games, Martinelli who is unbelievable and Tierney who is just everything I love in a player. There have been some misses, such as Luiz, but I can see the sense in bringing… Read more »