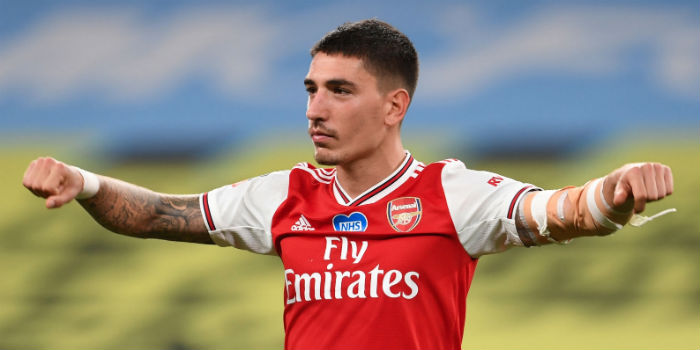 Arsenal have confirmed that Hector Bellerin will be available for Saturday’s FA Cup final against Chelsea after being rested as a precaution at the weekend.

The Spaniard sat out the Gunners’ 3-2 win over Watford on the final day of the Premier League season with tightness in his right calf.

Having asked Ainsley Maitland-Niles rather than Cedric to deputise at right wing-back it looked like the boss might be giving the 22-year-old more valuable minutes in the position ahead of a potentially big selection decision.

As things stand, we fully expect Hector to reclaim his place at Wembley.

Aside from Bernd Leno, who is resuming full training this week and could make the bench, Arsenal’s other injury issues are all long-term.

Yesterday, it was confirmed that Shkodran Mustafi will not resume training until October after undergoing surgery on his hamstring. The German is joined on the sidelines by Pablo Mari, Gabriel Martinelli and Calum Chambers.

Great news. He may have his limitations especially in crossing and his tackling is not the same after the lengthy layoff but for his pace and ability to track back and support the CBs, Hector remains our most viable option at the right back/rwb. Here’s to him tearing the so-called “captain America” a new one on Saturday! ?

Nope! he’s been liability on that side, he is always lost and out of position when he goes forward. Willian and even Azpelecueta will have field day with him on the right side. Hector hasn’t recovered since his injury, his controls, crosses are terrible. AMN can match Willian’s speed. I wouldn’t start Hector.

Oooh that would be a cool option in FIFA. My friends and I used to like hitting randomize to pick random teams to play with. What if you could hit randomize on individual players? Like I’m going to play as Arsenal but with a random striker. You could end up with Messi or some bloke from Tranmere Rovers, it’s all luck!

Structure needed. We have to accept we shouldn’t be the team controlling possession. Be ready to play direct, counter attacking style (great trio up top for that). And have really good structure and defense from our middle 5 at the back (HoldingLuizTierneyXhakaCeballos) and just hope we get them at their hard-working defensive bests and the brain-farts take a vacation for a day. Do that and force Chelsea wide on the ball, counter-attack and press high at the right moments and we can win.

That’s the same lineup I posted a few days ago. Can’t see any other way of approaching the game. We just have to hope the good Luiz and 2017 FA cup final Holding show up.

Eddie and Willock off the bench if we need some speed. We also have Torreira and AMN to come on to keep it tight later in the game.

I’d put AMN out there and instruct him to stick to Pulisic like glue. He’s their most dangerous player

Good news but I’d still be very tempted to go with AMN at RWB.

What a great lad!

Between Bellerin, AMN and Cedric, who would you rather we sold during this window?
Think 3 is a bit too much cover for RB/RWB position, although AMN could be used more in midfield next season, I suppose.

I wouldn’t be against us trying to flip Cedric for a profit. A seasoned Portugese international with plenty of Premier League experience might earn us a few nifty quid in the market!

Longbow
Reply to  A Voice in the Noise

I don’t think we can sell Cedric because we just signed him on a permanent deal.
He can also play one the left. He’s quite versatile and will be a useful squad player for us.

Gooner89
Reply to  A Voice in the Noise

If Hector is fully fit he gets the nod but if there are any question marks at all around him then AMN has shown that he has the chops for the job, not even worried there. Even if Cedric weren’t cup tied I’d still want him to deputise. We’ll almost definitely revert to a back 3 so whoever plays will need the legs to both over/underlap Pepe (and or Nelson) and keep tabs on Pulisic. If Ainsley can do it against City on the left he can do it against Chelsea from the right, I’d even back him to get… Read more »

Great news. We will need his experience and level headed calm at Wembley. Hopefully he and Tierney can push on next season and develop a great fullback partnership – our seemingly never ending penchant for incurring long-term injuries permitting, of course.

Good news! I saw him man-mark his winger against City, that was some quality defending. Let’s hope he has a similar game on Saturday.

Maitland Niles should be starting. Bellerin isn’t good enough. Teams always pressure us from his side. He also doesn’t connect well with Pepe.

Looks like we will have to play a back 3 of Holding- Luiz and either Kolasinac or Tierney. Difficult decision bc Tierney is more diligent but also more susceptible to being beat in the air or physically by the in form Giroud or Abrahams (particularly near post) They will target him. Bellerin is a plus for us going forward at wingback with again either of Tierney or Kolasinac. Then midfield Ceballos-Xhaka. Auba and Laca presumably start as well which means right side attack is also a bit of a toss up. Pepe has the magic left foot but work rate… Read more »