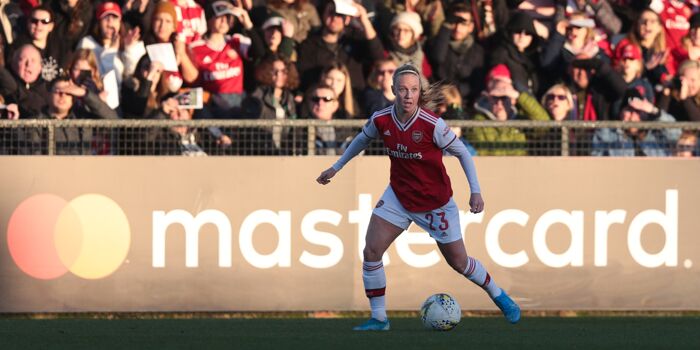 Arsenal forward Beth Mead will wear the number 9 shirt next season following the departure of Danielle Carter this summer. Carter left the club after her contract expired with her transfer to another WSL club set to be confirmed in the coming days.

Mead has worn number 23 since signing from Sunderland in early 2017 but she will take the number 9 shirt as from next season. New signing Steph Catley will wear number 12 with Noelle Maritz wearing her favoured number 16 vacated by Louise Quinn, who joined Fiorentina this summer.

The girls joined up for the first day of pre-season training today, with the exception of Lydia Williams and Noelle Maritz, the latter of whom is on holiday having only finished the German season with Wolfsburg just over a week ago. Former Gunners defender Anna Patten is training with the club too before she goes back to the US to finish her final year of study with the University of South Carolina later in the summer.

Players will be tested twice weekly for covid. This week, players are allowed to train in groups of up to five, without contact and while following social distancing guidance. Players will change and shower at home. This will last for a week until they can enter phase 2, where closer contact training and tackling is permitted. Clubs are at liberty to decide when they can return to full 11 v 11 training thereafter. Arsenal Women are training at Hale End to help maintain social distancing with the men’s team at Colney.

The FA has confirmed that between 2nd July and 11th July inclusive, 802 tests were carried out for COVID-19 across the Barclays FA Women’s Super League and FA Women’s Championship.

Of these, one has returned positive.

Arsenal will start their season by finishing last season’s Champions League in a one week mini-tournament in Bilbao and San Sebastian. The Gunners play a quarter-final tie against Paris Saint Germain on August 22nd.

Is malin gut back in training too?

Her and Lydia weren’t in the training pics so I guess not. Maybe they were inside getting some kind of treatment or having tests.

Is that a promotion but 9 is less than 23?
Back in my day, number 9 stood on the opposition’s penalty spot and headed in goals for fun. I cannot imagine Meado doing that somehow!
I have never understood the squad numbering system. I must be an old duffer!