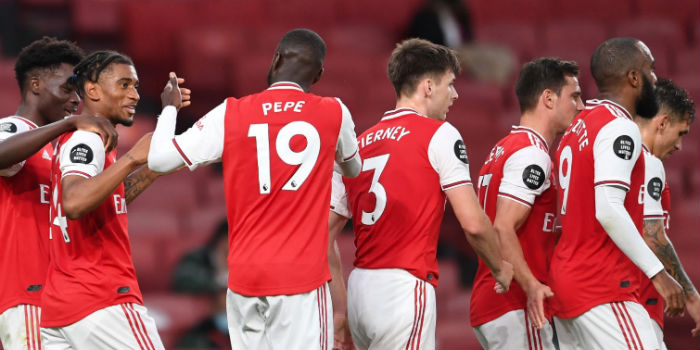 When Reiss Nelson returned from his loan spell with Hoffenheim last summer there were high hopes he’d take the Arsenal first team by storm.

It’s not really worked out that way.

Given minutes early in the season by Unai Emery, he struggled to assert himself on matches and eventually found himself behind Gabriel Martinelli and Bukayo Saka in the pecking order.

Things picked up again for the winger when Mikel Arteta became head coach only for a hamstring injury and the lockdown to nip his momentum in the bud again.

Having played with so much freedom during his Academy days, Nelson has often looked like he’s playing with the handbrake on at first team level. He admits it’s been a frustrating season so far but he’s regaining confidence under Arteta.

Speaking to BT Sport ahead of Saturday’s FA Cup semi-final, he said: “For me it’s been a bit more tricky because I went out on loan and came back and it was hard because we were changing managers I had to wait for my opportunity.

“For me I’ve got to keep going and keep being patient and nail down my first-team spot.

He added: “It’s just about getting the right mindset and mentality to go out and give 100 percent for the badge and if you make a mistake don’t doubt yourself in the next situation which I feel like I’ve done before – just to carry on playing the game I play.

Bagging the winner in the 2-1 win over Liverpool this week – his first goal in the Premier League – should certainly help his morale.

“As a kid you want to score your first goal and I’m delighted to get it against the champions and we got the three points too so it ticked all the boxes,” he reflected.

“When I got home my family were buzzing my brother said he couldn’t sleep till 4am. Everyone has been on a buzz and my phone won’t stop buzzing.”

That Nelson is coming through the ranks with other players from the Academy is something that he cherishes. There’s a strong bond between the group who’ve been pushing each other in training for years.

“Joe’s my brother,” he said.”I have a lot of love for Joe, we’ve been together since under-8s and we started our journey together and now we’re playing for a great club together you couldn’t have asked for anything more it’s a great feeling.

“We have to push each other on. Sometimes you go into some dressing rooms where there’s a divide with the French players, the Spanish players, the old, the young, but at Arsenal it’s not like that because me, Bukayo, Eddie, Joe have come through the system together.

“I remember watching Bukayo when he was coming through under-13s it’s something that we’ve always wanted to do to keep each other grounded playing with each other and keep growing together.”

Given our financial situation, the club knows full well that having a talented group of young players coming through the ranks is a real bonus. Having worked so hard to develop them, it sounds like Arteta and those around him will do everything they can to give them the minutes to deliver on their potential.

Speaking in his pre-Wembley press conference, the Spaniard said: “It’s really important because this is part of our DNA. We can produce at home and we know that with the facilities and structures that we have in place, we have players of that calibre and that level.

“There are some things you cannot compare with anyone from the outside because their feelings and their relationships within the club and how much they care, their passion they put in for our team is different and that’s a mixture you don’t get from anyone else.

He added: “We want to give them as many opportunities as possible, again with the right environment and the right structure around them, but then it depends on them.

Honestly I don’t think Nelson is or will be good enough for a starting XI side. But he may just be that difference maker that’s needed off the bench.

I think he’s got a decent shot at being a starter. His first taste of first team football on loan in the Bundesliga he scored 7 goals from out wide. He’s got a lot of talent, and it seems like attitude was possibly what slowed his progress on loan, but hopefully from the way he talks in this interview it sounds like he learnt from that and knows he has to knuckle down. I think/hope Arteta could be the perfect manager to develop him.

I think confidence has been an issue for Reiss. He certainly has talent. The goal against Liverpool was actually really clever and well executed. Fingers crossed he can keep progressing. He is still young

Yea he is a great player but I’d say he’s better suited to be our Pedro (from Barcelonas great years). Remember that was in his first couple games and then he barley scored or assisted for months. Plus he’s not “that young” anymore and no signs of this changing.

Nelson was the next good thing from the academy when Arteta was a player in the club. He will give him opportunities.

But he’s good enough to score the winner against Liverpool.

I started following football and supported Arsenal because of the 80s generation of Adams, Keown, Thomas, Rocastle, Quinn, Merson and Davis.
Hopefully Reiss, Bukayo, Joe, Eddie and Emile can all become valuable member of our squad and go on to be as successful as the players that made me fall for this great club back then
I know that probably not all of them will but in the words of Kevin Keegan “I’d love it, just love it!!” If they did.

It would be fantastic if he joined that list too. As long as the club can convince him to stay.

That last paragraph by Mikel, that’s the truth!

Those three weren’t in one generation. They’re nearly a decade apart. Nelson has incredible potential and a real footballing brain, Saka has been one of our best players this year, Nketiah is clearly demonstrating enough in training to be our 1st choice striker. AMN, ESR and Willock are talented, mouldable and in love with the club. The futures Bright.

You dont know what youre going on about mate. Rashford world class really ??? How can you call him world class ? And as for Greenwood he is just over hyped at the moment, he hasn’t done anything. Pogba maybe world class but only by he’s present form and for for Juventus and would he have been as good if it wasn’t for him moving to Juventus? And definitely not he’s previous Manc form. How about Serg Gnabry if you’re talking about world class then he’s surely got to be included and he came through the Arsenal academy. Give our… Read more »

As the others have said, but in addition, Pogba shouldn’t count at all since he only arrived at united at 15-16

It really gives me pride in the club knowing how much our young players support one another and knowing the bond they share between themselves and the club. Couldn’t be happier for all of them

Also big props to our top man Per for all his focus on values and raising well-rounded young men in the Academy. You can see it paying off here

Per has only been in the job a year !!!
Maybe thank he’s predecessors and the coaching staff who have been working with these boys from a young age and never forget the Wenger impact on the club still to this day and many years to come yet

Why do you think Arteta still speaks so highly of the great man ???

I feel like during the years we have brought up some very exciting and talented youngsters. There are mostly very skillful, love going forward, good at passing and playing entertaining football. What we miss in the academy players m, especially at Arsenal in the physical side. Our youngsters dont like to get roughed up or play dirty when needed. Saka has been one of the few players who has shown some intelligent work in his defending. I think all our young players should play a full season out on loan in England to gain that physical aspect of the game… Read more »

The way he scored against Liverpool makes me think that he could be a good option to replace Laca if it comes to it this season. He harasses the defenders, is calm within the box and link up play doesn’t seem to big a stretch for him. If we end up losing Laca (& retaining Auba) we can reinvest that money in other positions like CB, CM etc. I would like to see a Xhaka replacement/option. While Xhaka is not bad, he is limited in his abilities (no fault of his) and I’d like to see someone with qualities of… Read more »

Has a bright future ahead and an opportunity on the right. Pepe good today apparently but still plenty open for competition on that flank as we need consistent output.