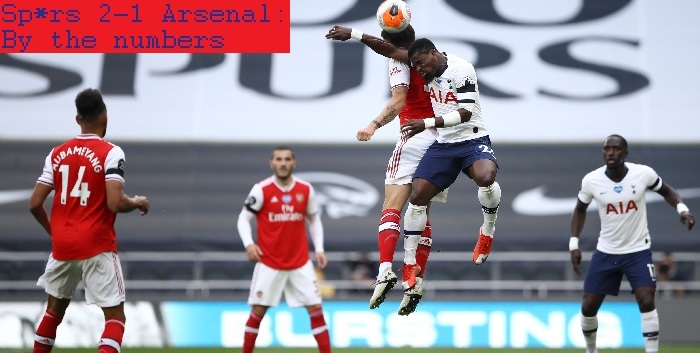 It took me a while to come to write this post. Instead I spent time power washing my garage because I was incredibly uncertain what exactly I could say about this match now that the season is all but over. After this, Arsenal’s odds of Arsenal finishing in the European spots are significantly hurt.

My simulation for the rest of the season says that Arsenal have just a 15% to finish in the Europa League spots (5th to 7th places, it is 35% if 8th is included and Manchester City’s European ban is upheld), even worse the odds of St. Totteringham’s day are just 1 in 3 now. Essentially the season’s prizes are out of Arsenal’s hands, with little left to play for beyond pride.

Hopefully the last matches and see growth in the team to build a foundation for next season. 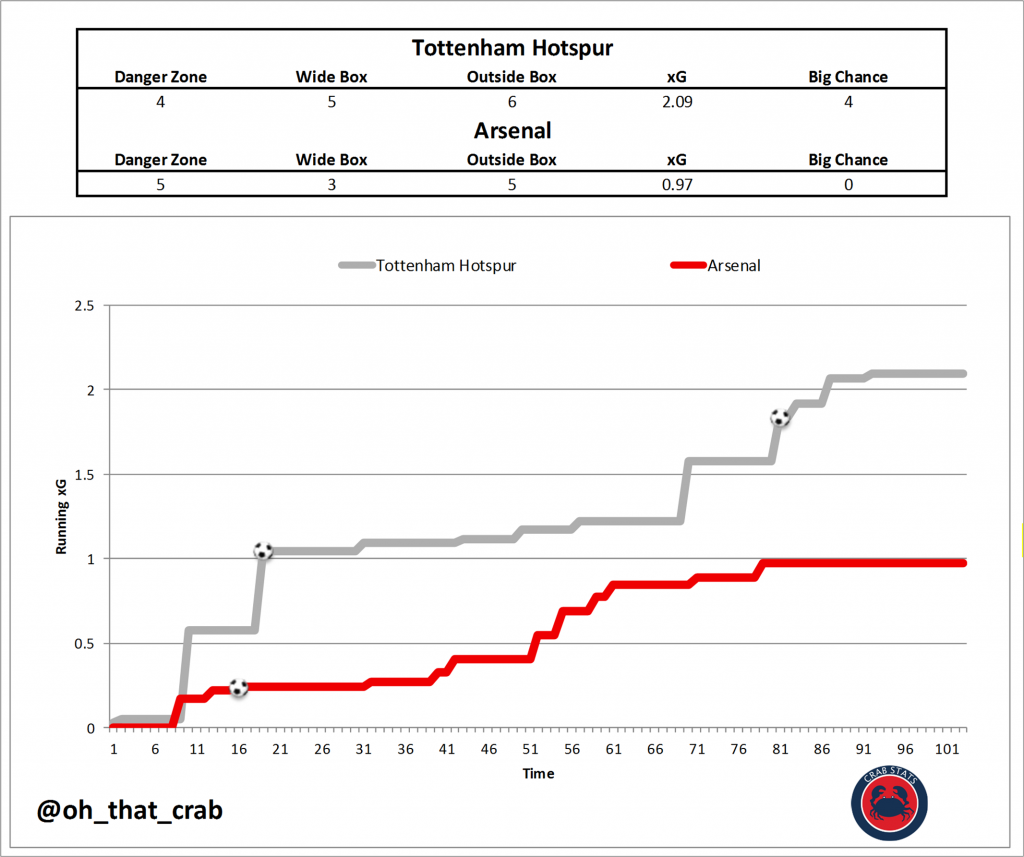 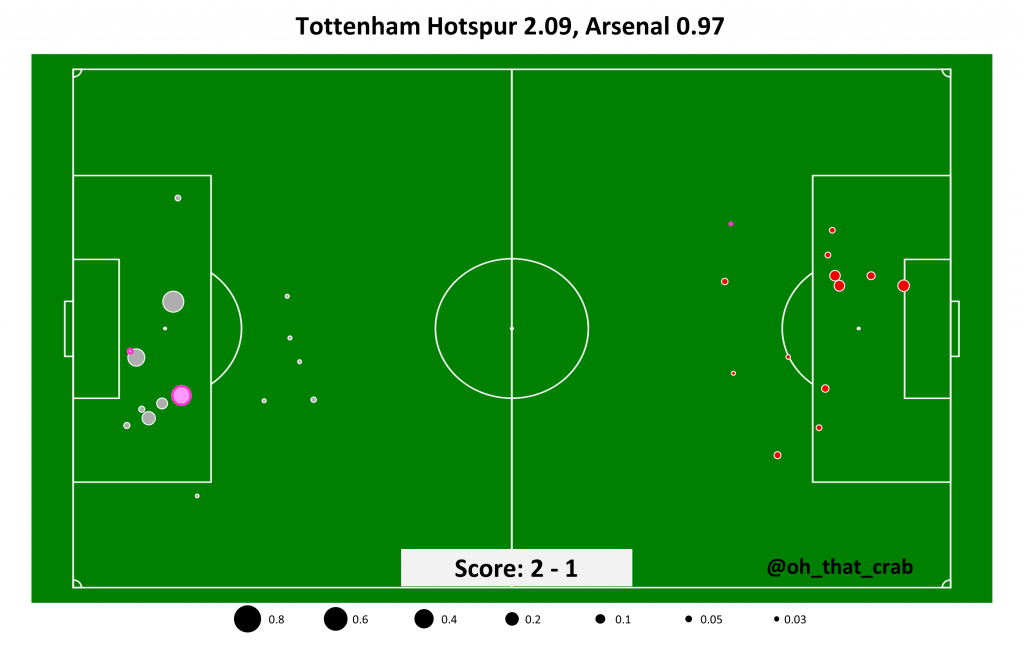 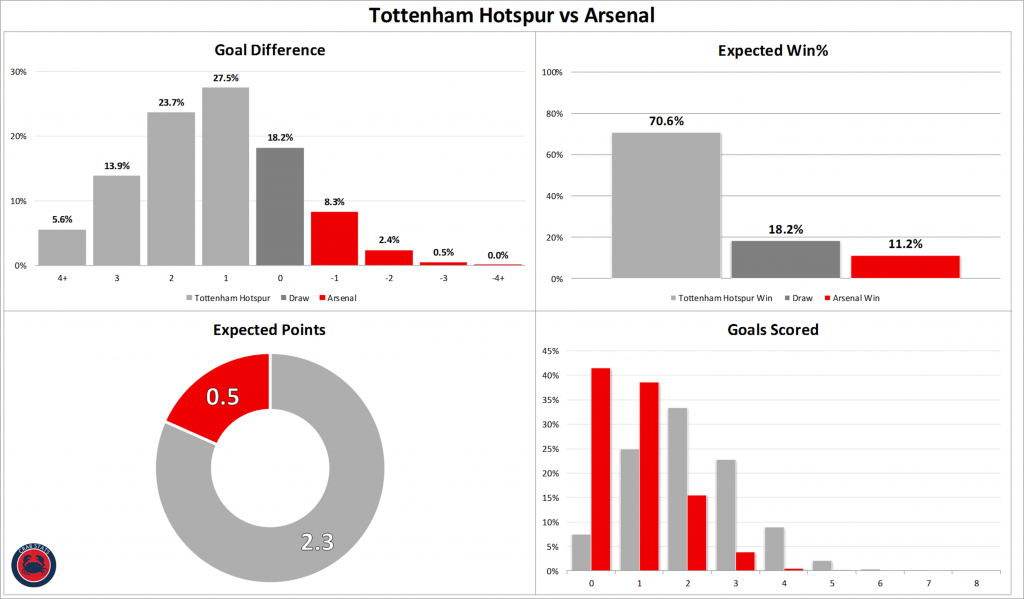 This match really seemed to play right into the strategy of Mourinho who came out fast putting Arsenal on the back foot from the start. In the opening 23 minutes (the first quarter) Sp*rs had 4 shots to 3 for Arsenal while having a slight edge in possession. What turned the period were the two big chances by Harry Kane (well saved by Emi Martinez) and Son Heung-Min. Alexandre Lacazette scored a screamer of a goal, but from a tactical perspective that is one where you tip your cap if it is scored.

For the 2nd and 3rd quarters Mourinho seemed to have hoped Sp*rs would be ahead but seemed content to muddy the game and try to wear out Arsenal. In this period, Arsenal dominated the ball with nearly 69% possession and out shot Sp*rs 7 to 4. What Arsenal failed to do was turn this domination into good scoring chances. Of their seven shots none were in prime locations (inside 11 yards) and had just a total xG of 0.6.

In the last period of the match, Arsenal’s shallow bench tied Mikel Arteta’s hands with his ability to change the match with substitutes. As Arsenal ran out of energy Sp*rs were able to find chances in an increasingly open game. In this period the shots were 7 to 3 against Arsenal, with the xG 0.9 to 0.13.

What this match hammered home for me, is that Arsenal are just not getting enough creativity from midfield.  I was looking at where Arsenal’s midfielders rank compared to other groupings in the Premier League before the match and it is dismal.

If you are going to have solid but not exactly creative players in midfield you have to make up for that with a either an exceptional attacking band of players or incredible full/wingbacks, preferably both. Things have gotten better at Arsenal under Arteta but there is still a way to go.

Sources: Opta via whoscored, StatsZone and my own database, StatsBomb via FBref

14th in midfield play, a clown college of a back line and a general lack of quality at the finish. How are we not bottom half?

How many chances does Xhaka create for the Swiss team? Just like to know, he plays in a different role for Arsenal and could be a solution. ..

Mourinho and his Skysports friends have been talking so much of rubbish about tactics he supposedly put in place. We made costly defensive errors that gave them victory. That’s all.

Tactics against Arsenal what takes into account defensive errors is absolutely viable tactics to use against us, specially in high profile game. Teams can’t build their game plan around opposition giving your goals against normal teams but given our history in big games, they absolutely can do that in games against us. Luis and Mustafi and Kola may look alright against Norwich, but we have made mistakes that cost us the game in basicly every big game this year. All opositions has to do, it to put us in pressure situations, and history shows our defenders can’t handle it. One… Read more »

Right.
Tactics against Arsenal aren’t complicated. They consist of:
Let Arsenal’s defense do anything. Those halfasses will cock it up on their own.

When that is NOT the case, is the exception, not the rule.

Christ. Something needs to be done. You wonder if our wb’s are the ones whom should make runs to deep in the box and try to finish, as cm’s are clearly instructed to maintain position outside final third. Without proper play at the wings team becomes predictable and especially in games like yesterday this is highlighted, as we just pass around opponent movement hoping not to lose ball for counter. If we lose the ball and line is high up, its the worst situation. You can make Luiz and Musti look good, if you dont pull up the line from… Read more »

I’m actually resigned to, and actually looking forward to, a season not in Europe. Don’t get me wrong, I fully understand the financial implications of that, of how it might affect the chances of keeping one or two players. But overall I am looking forward to selling some players and the opportunity to rebuild without the ridiculous Thursday Monday grind that sees heavy rotation and doesn’t give a lot of time for building a team and system. I think that to rebuild properly a season out of it could well be to our favour, and maybe really help in making… Read more »

While being out of Europe sounds nice for rebuilding, one shouldn’t be out of the competitions for too long because of the setting system. The successes in European competition in the last 5 years are counted and we still have two good seasons in there with the EL semi and the final. For this year there will be little points added due to our embarrasing exit in the round of last 32 and for next year maybe none at all. As soon as our two good seasons are not counted anymore for the 5 year setting, we might find ourself… Read more »

Great reply btw, something I had not considered and fair point. Maybe it does mean one season all in go for glory.

Maybe, just maybe it might just be the final nail that convinces Kroenke he ain’t cut out for a premiership team and he cuts his losses.

What we learned from this game Is that we can not play a 3-back formation with Kola, Mustafi and Luiz. We did controll the game but let them hit us one the counter. Our fragile centerbacks need protection and they’re not getting it..

It’s really sad that almost all our defenders are error-prone, but I think Holding and Chambers should get a run-in the team.

Sometimes defenders just have to defend. We are protecting them with having 5 defenders and 2 conservative midfielders on the field. We can’t protect them any more. We are giving up any chance of having somekind of attacking game plan, so we could help them along, but even that is not helping them.

On the upside. The cocks on balls played like Wimbledon of old, even with the result it must be hurting their eyes watching that style week in. The empty stadium must be affecting them more than any club in the PL and we may only see that in the next few seasons what the implications are. No concerts, no NFL and no CL.and that tool in charge. I’m hoping for a downward spiral .

Our midfield balance seems to stem from how poor we are in defence. None of the CBs that played yesterday are any good defending one-on-ones and need to play in a back 3. That means we need to play deep and they need extra protection from our midfield, which limits what they can do going forward. I actually thought we should have brought Saka on for Kola yesterday, going 442 or 433 to try and take the game to Spurs.

Only the attack is any good and they get piss poor service.pure shite in defence and midfield. Mid table team only Because of the former

I have 2 main problems for Arsenal’s playing style. First, this passing the ball around in front of their goal is always very risky. As it is proven twice since the restart, by conceding goals for a poor pass. Second, their corner kicks are awful. They should train 1 or 2 players during practice for a perfect corner kicks.

How can Xhaka be so rated by so many? Yeah his distribution is ok and he adds some security to our midfield. But my heavens, his technical ability on the ball is so bad. He can’t turn on the ball, he takes forever to put it on his right (left) foot and whenever he’s pressured he tries to get fouled because he’s unable to beat a man. I liked how Arteta used him the first games by building play from LB when he was forward facing. I think he’s to slow, not athletic enough and lacks the technique to play… Read more »

These stats simply confirm what we all see, game in and out. No midfiled. Xhaka is bang average. Ceballos a lightwieght passenger. Our defense is a joke. Out attack runs hot/cold. Oh, and after Auba’s non-performance in this game. One against spurs (he’s a mercenary, he doesn’t care) that was critical to our league position…he just didn’t show up at all. Sell him. He’s not worth the drama and he’s not clutch when we need him. That they gave Luiz a contract is so maddening. Mustafi needs to go. Kola is rubbish and needs to go. Bellerin … we should… Read more »

Thanks for the midfield creativity data. Qualitatively that’s been my feeling as well. Our midfield is ponderously slow (with and without the ball), can’t take anyone on with a dribble, never gets into the box and rarely makes a pass through the lines (vs. booting it out wide). Yes, occasionally Xhaka plays a nice long ball, and Ceballos plays some aggressive passes, but this is an incredibly slow and unthreatening double pivot that I don’t see any coaching overcoming.

Arsenal had been off since Tuesday, but Spurs played Monday and Thursday. Yet on Sunday they were the team that dominated the final 10 minutes of the match. That is a joke and reflects really badly on our players.

We should have been punishing them to exhaustion late in the game, but our players didn’t have the fight to do it.

Good data digging Scott! 19th in the league in two key metrics of midfield creativity. When you pair that with our dreadful back three, you might actually start to feel sorry for guys like Pepe and Laca.