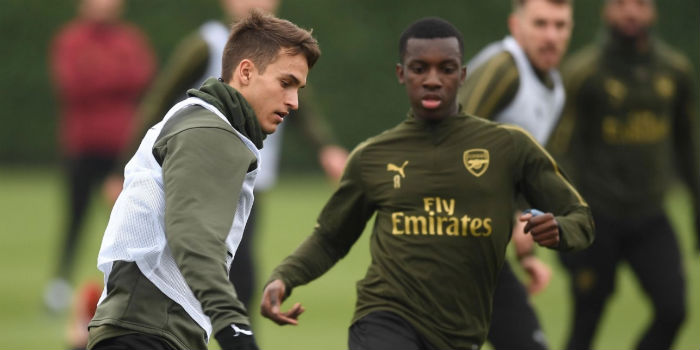 Denis Suarez was so impressed by Eddie Nketiah’s potential that he told new club Celta Vigo to see if the England under-21 international was available when his loan deal at Leeds ended in January.

The Spaniard may have endured an ill-fated, injury-hit and short-lived loan at the Emirates during the last campaign but he obviously had his eye on the players coming through the ranks at the club.

In an interview with OneFootball.com, the 26-year-old midfielder was asked which of the Gunners youngsters had a good future in the game. His answer was emphatic.

“Eddie Nketiah. In fact, I remember talking to Antonio Chaves, Celta’s Sporting Director, and telling him that there was a very promising striker coming through at Arsenal.

“He went on loan to Leeds but things didn’t work out. And I said if he wanted a striker, he should call him.

In association with @bet365 we asked @DenisSuarez6 which youngster most impressed him during his time at @Arsenal ?

“Now he’s slowly becoming a regular even if not as a starter, he’s having minutes to make an impact.

“It seems like he could be important in the coming years at Arsenal and they should take care of him because he is very talented.”

In case you were wondering, Suarez has done ok at Celta Vigo this season, making 28 appearances. A hamstring injury ruled him out of the final games of the season but we’re glad to see he was able to recover from his time in London.

Says something about our Eddie. Would love to see him take on players more.

Pepe should be the attempting the most dribbles.

Off topic but still in Spain –

Villarreal appoint Unai Emery
Why would they do that?

He’s an intelligent guy but without the footballing nurture of Mikel Arteta.
Besides the tactical nous, Football (sport) forces young otherwise impressionable youth to learn organization and secure team goals at a young age.
A dedicated, always-developing guy who didn’t have the young stress of a team and responsibility will eventually figure it out and rise to the top.

Because he won Europa League many times and managed PSG. Arteta hasn’t done any of that yet even though we all think he can with a bit of luck (which is always needed).

If I was Villarreal I wouldn’t have many doubts. He has performed well at bigger teams in Spain in the past and won several European Trophies. He led Arsenal into a European Final in his first season with some very good games in the knockout phases. Last but not least, when others took over at Arsenal, they couldn’t really turn the situation around until now in the league and crashed out to a bland Greek team (no offense) in the EL without any need. This is in no way a dig against Mikel, but it is not like Emery left… Read more »

“he has performed well at biger teams in spain…”
Nope, unless you think of a Sevilla as a big team or biger than arsenal?

Apart of Sevilla Emery didn’t perform well anywhere else. Had a decent stint for a season at Valencia and was eventually fired just as he hss been at every.other single club he worked at.

Apart of europa league with Sevilla the guy didn’t really performed anywhere else.

But yeah, he was headcoach.of PSG and Arsenal ☺

I wish someone would have told us not to sign Denis Suarez.

In one of Ornstein’s podcast last season, he revealed Sven Mislintat was against signing Dennis Suarez.
That transfer was among the list of disagreement Sven and Raul had.

If he was responsible for Lichtsteiner it evens out, ha.

Suarez might have a better chance of making it as a scout than a player. Looks like more injuries this year.

Was reading yesterday that Marca included Dennis Suarez in their most disappointing XI of the season. I don’t know enough on his performances to say whether that is fair or harsh

I’d say fair, because Celta barely escaped relegation and while he played 26 league and 2 cup games, he scored only one goal, which is not really alot as attacking midfielder.
I guess when a relegation club gets just about any attacking player from Barcelona, they’d expect such player to contribute more.
But to be frank, the only Celta Vigo footage I have seen this season was from a simulcast of the last round in Spain and he was injured in that game, so I haven’t seen a single minute of Denis in action.

“In case you were wondering, Suarez has done ok at Celta Vigo this season, making 28 appearances.”

I’m glad to hear that. Not his fault he wasn’t up to the requires standard when he came to us. All the best to him and the rest of his career.

This might not be popular but I honestly don’t know why everyone keeps talking about how great Nketia is. He’s no longer a novice and has received his fair share of games. Yet, unlike Saka and Martinelli, he hasn’t really made heads turn. I hope I’m wrong, but I doubt he’ll achieve the level we need. In fact of all the young players who have featured in the first team, only Saka and Martinelli seem truly special.

Agreed. He’s definitely not an extraordinary talent. I would put him bottom of the list of all our first team squad youngsters

I’d agree also, i haven’t seen anything special about him at all. I really hope he proves me wrong though.

Beside injuries, I see no reason why Eddie won’t make it to the top if he really wants it enough! The raw talent is definitely there.

You’re not the only one, don’t take me wrong, I think he is a good lad and have potential, but he haven’t show anything amazing yet for the time he has been on the first team (neither on leeds). I think Saka and Martinelli has shown a lot more, and been impressed with this 2 more, specially the later, who was an unknown and arrived to the team with thunder and lightning.

He does have potential right now tho, but If someone like Martinelli or Saka are fit, I wouldn’t play Eddie over them.

I think in 10 years, Eddie will be the Welbeck of the next decade. Solid, reliable English PL striker. If that should be the main man of your attacking force would depend on your ambitions. In case you have any title or CL ambitions, then probably not.

I’m inclined to agree. Bielsa wouldn’t start Nketiah over Patrick Bamford due to his all-round game being lacking but there are people arguing we should sell Lacazette to give Eddie 40 games next season

And Bamford couldn’t hit a cow’s arse with a banjo. If Leeds get a decent centre forward next season they could mean business.

I like Eddie. His pressing has developed a lot with Arteta. Now he’s more inclined to make things happen himself, instead of waiting around for others to serve him chances. He’s also our only aerial threat at CF. He can work on his linkup play, but he’s really got everything in his locker to become a good PL player. Dominic Calvert Lewin has scored 13 league goals for everton this season. He is two years older than Eddie. I don’t see why Eddie can’t beat that in two years time. We just gotta have some patience with the kid. He’s… Read more »

It’s amazing how much pressure we heap on young players. I wonder if everyone can start performing from the get go.. Maybe Nketiah will start firing from next season. The lad had an exceptional scoring record.
Let’s hold our horses with the judgement of his potential and the comparisons between Saka and Martinelli for being the golden boy at Arsenal are unnecessary.

I honestly think Eddie is a rising star. Hes not the finished article by any stretch of the imagination. But I put right up there with saka and martinelli.

That’s a really push at the back for Eddie. Thanks, Suarez ?

He’s an instinctive finisher Nketiah, should get a nod for next season. The other striker we need to keep is Laca. Auba IMO will likely leave given age at 31yrs. We will be foolish to keep an asset that will start to depreciate. BUT he may also feel we cannot offer him the truly big prizes and he is at a juncture of now or never. Likely he will be prey to a bigger club just how much. HIs role can be filled by Martinelli from the left but considering the Brazilian’s return is next year subject to delays..we may… Read more »

A ball carrier in central midfield should be our highest priority.

I read somewhere Leeds is in for Cavani.

I agree with the idea of getting an older player who can tie us over, while not blocking Saka/Martinelli’s career trajectory, but I’d prefer one with experience and that’s why Willian makes sense. Seems like we’re going for Joelson from Sporting which would give us plenty of youth on the wings, then somebody like Willian could really tie us over for a season or two