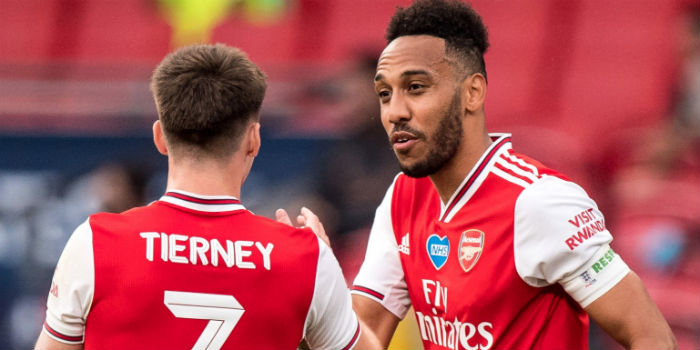 Kieran Tierney says it’s an honour to play with Pierre-Emerick Aubamyang and says he’s grateful for the opportunities given to him by Mikel Arteta as he continues to go from strength to strength at Arsenal.

The Scot delivered another canny performance on the left of a Gunners three-man backline which defied the odds to keep a clean sheet against Manchester City on the way to a 2-0 victory that sends us to the FA Cup final on 1 August.

Aubameyang did the damage with a goal in either half, the second of which was set up by Tierney, who played a beautifully weighted ball down the left flank to free the striker on goal.

After the game, the 23-year-old paid tribute to his captain.

“Yeah, it’s brilliant [playing with him],” he told beIN SPORTS. “He’s done it for so long now in his career. For me to play with him is an honour. That ball from me tonight, it’s not like a goalscoring ball and he makes it a goal. It’s brilliant to play with.”

"That ball from me is not a goalscoring ball, he makes it a goal!"

Modesty from @kierantierney1 on THAT assist for @Aubameyang7 the Scottish defender is making a real impression in his debut season with Arsenal! #FACup

After losing the North London derby last Sunday, few people expected Arsenal to bounce back with wins against Liverpool and City. In both instances, we had to make do with minimal possession, but it sounds as though Arteta, recognising our limitations, drilled his players on game plan he felt they could execute.

“I think the manager has mentioned before that we have to suffer together at times like this, in games like this,” said Tierney.

“I think, tonight we done that. We showed great character and defensively we were very good. We probably took quite a bit of confidence from the Liverpool result.

He added: “It’s been tough. A tough week, a tough few days. It’s a quick turnaround as well to the next game. It’s been like that since the restart but the boys are very happy and working well. Every day is positive and we’re building for something big.”

After an injury-hit first half of the campaign and then the frustration of getting fit just as lockdown restrictions were imposed, Tierney looks to have finally settled. Whether at left-back, left wing-back or on the left of a three-man backline, he reads the game well, knows when to put his foot in and is composed on the ball.

Even since June’s 3-0 defeat in the league at the Etihad, he’s come on leaps and bounds.

“I learn every game, I try and learn every game anyway,” he said. “That [game at City] was my first game back playing under the new boss. I was grateful for the opportunity and the more opportunities I get, I’m even more grateful. I’m just working hard.

He added: “It’s brilliant, I’m learning every day under the manager and I’m loving every minute of it.

“He’s helped me so much since he’s came in. I was injured when he came in and he was still speaking to me, still wanting to make me better. I can’t thank him enough.”

Kenny Samson, Nigel Winterburn, Sylvinho, Ashely Cole (before he turned into Cashley!). I’ve seen some great left backs at Arsenal over the years but think Tierney is going to be the best of the lot. He has made an amazing impression already, showng character, determination and a great left foot and is only going to get better

There’s more than a bit of old school Stuart Pearce in there too. We’ve missed some steel in the defenders.

Anyone better than Cashley will eventually be the best LB in PL history, Cashley was that good.

Cashley Cole? Overrated! Pretty good defensively, I’ll grudgingly admit, but very limited going forward. In 14 Premiere League seasons — on one outstanding attacking team (Arsenal) and one half-decent dirty-oil-money one — Cashley averaged a mere 2 assists and 1 through ball per season! His crossing “accuracy” was 20%.

Of course, it’s possible that I’m still just bitter about what happened…. : )

That’s a massive call. Better than Kenny Sansom?! Not yet he isn’t. And it’s Sansom – not Samson. If I had a pound for every time I had to correct someone on that, back in the day….?

The annoying thing is.. Ashley Cole remained great even after he became Cashley.

You can say it….
He became better when he left us

Fast becoming my favourite Arsenal player ever. As a Scotchman myself it is brilliant to see this kind of talent coming from North off the wall.

He didn’t turn into Cashley, he was treated like a c*** by our board. He should have played his whole career for us and been captain.

I love this kid already. If he becomes as good as Cole was for us, we’ll be more than happy. I’m hoping he ends up being as good as Chelsea Cole.

We’ve been blessed with his signing!!

Too Drunk To Be Offside
Reply to  Mentally Drained Gooner

So have Arsenal now qualified for the Europa League with reaching the FA Cup final? Given that Chelsea and United both have their route into Europe more or less confirmed through the league?

goongot
Reply to  Too Drunk To Be Offside

No, That place goes to the next best placed team in the league or 7th position.

S.Folland
Reply to  Too Drunk To Be Offside

No; it doesn’t apply to the runners-up. Where the winners are dual-qualified through the league as well, the space goes to the next-placed team in the league.

DaDude
Reply to  Too Drunk To Be Offside

Unfortunately not. A few years ago UEFA have forbidden the practice of some countries that the spot for European Competition went to the runner-up of a cup competition in case the cup winners didn’t need it. So if we win, we play in the EL together with the 5th and 6th of the PL. If Chelsea win and they are qualified through the league anyway, the EL spot will go to the 7th of the PL (which could also still be Arsenal with a bit of luck and things running for us)

What a lad! He’s genuine, hardworking and spirited. Great signing for us..

The way your playing, I’m pretty sure he feels the same about you.

Not a goalscoring ball? It definitely was.

Such a humble man and by all accounts a decent human. Heartening that such characters still exist in a sport increasingly synonymous with venality and greed. The fella makes me proud to be a Gooner.

With Per instilling Arsenal values in the next generation and Mikel insisting on his non-negotiables, I hope Arsenal players will continue to be cut different.

Auba agrees with you! @Aubemayang7: “Come on that’s a f*cking assist bro and thank u for That”

For Auba, that’s a goal scoring ball. Maybe not for somebody like Giroud, maybe

Without question he has to be our next captain.

We don’t score that second if it was Kolasinac playing. He would’ve played the ball backwards. Players ought to recognize when an opportunity presents itself especially when under the cosh and seize with both … feet? Their composure under pressure lead to that goal on the break and it was simply brilliant to watch! How many times have we conceded such a goal?

I share Blogs’ significant doubts about our executive team and their recruitment, but credit has to be given where it’s due, and Tierney is fucking excellent. I feel so confident about our left side when he’s out there. And despite his humility, that was ABSOLUTELY a goalscoring ball.

Tanned arse
Reply to  Guns Up

I don’t like the idea of cosying up with some agent(s) to get players and there have been some questionable purchases made. I do also think the criticism is excessive though. You’d want most of the buys to be ‘hits’ for sure but not all will be. There were mixed comments about buying an injured guy for £20m+ and having haggled all summer. The ability he’s showing now makes this look like great business. Add £10m for the character and personality this lad has because it screams absolute ‘winner’. Then look at the martinelli deal. That’s a great buy. Saliba.… Read more »

Tierney is becoming my favourite player. Next shirt I buy will have his name on it for sure.

£25 million turned out to be a real bargain for Tierney.
Great attitude and work ethic coupled with excellent defending and attacking potential and he has the ability to be the best in England.
Great player – some thing Emery CAN take credit for…

Blogs – why are my comments getting stuck in moderation?

Arteta is doing all the right things. For fans who still dont see it should go support other clubs. Its about time we give Arteta credit for the work he has done in such a short period.

All the complaints about our recruiting policy were made to look ridiculous last night …… just sayin!!

Kanu Believe It
Reply to  Ozillator

And my stopped watch still tells the time correctly twice a day.

He and Martinelly have been perhaps my 2 favorite players this season. Both have been amazing, and might that continue

What a nice kid and an excellent competitor. Hope he stays his whole career with us.

It’s this level of sportsmanship that he’s showing that allows me to put up with all the nonsense that surrounds this sport these days. A fantastic reminder of what this game should be all about.

A very humble lad with steel and hardworking to boot. Make him our next captain please.

I thought he was excellent yesterday tucked into the defensive trio. Certainly better concentration levels than Kolasinac,swept clear the danger in the first half and several good headed clearances, positionally strong plus great assist for Auba. Down side of course is his physical size for the left CBack role but I suspect this is more an expedient option at the moment using him there and a back up option in future with several other candidates at Cback to come into fold in Mari and Saliba (Both still need full assessment) …most likely his main role will be wingback/fullback. In that,… Read more »

Well done Arsenal.
Football manager and player is a kind of relationship between man and woman,
When ever your given a woman what she likes most then she will always be there for you,
I believe the mostly changes is in the way the manager has approached the players now they all have realized their commitment,
I will be more happy to see more action from them.