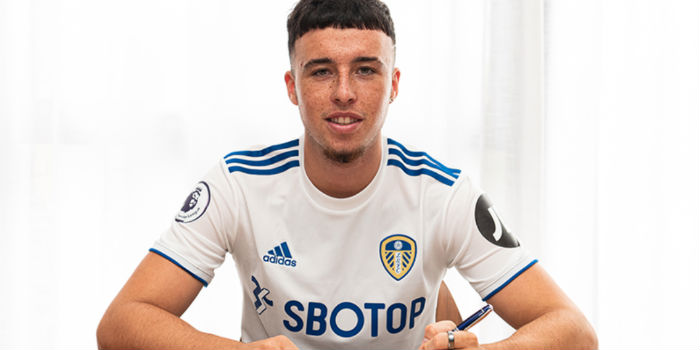 It’s been confirmed that Leeds United have signed Arsenal youngster Sam Greenwood in a deal that could net the Gunners up to £3 million.

A regular at under-18 level last year, Greenwood was tipped to challenge for a regular starting berth with the under-23s this season what with Folarin Balogun expected to depart and Tyreece John-Jules set to head out on loan.

It’s hard to say if impatience has driven Greenwood’s decision, but if Leeds have outlined a plan to fast-track him into the first team at Elland Road, you can’t really blame the kid for having his head turned.

Bidding farewell via Instagram, Greenwood said: “I want to say a big thank [you to] Arsenal and the supporters for the last 2 years of my career. Been an honour to play for the club while meeting some special people and making even better memories.”

Having been signed from Sunderland two years ago, Arsenal will make a bit of a profit on his sale. It’s said we’ll get £1.5 million upfront which could rise to as high as £3 million with add ons.

Few more quid in the kitty I suppose

VAR will solve the problem
Reply to  Anonymarse

Good luck, Sam!
Hope their is a first option or buy back clause in there somewhere in that contract.

Ecky Thump
Reply to  VAR will solve the problem

there won’t be a buy back,
the main reason he left was because
he couldn’t settle in London and wanted to head closer to his family

Hopefully he can afford to go to a barber now

its a horrendous look isn’t it

Let’s hope we get what we’re asking for AMN and that Guendouzi finds a rich club that pays us handsomely for him.

I hope we put buyback option or Sell on clause

We aren’t exactly winning prizes for the management of our Academy players. Recruitment seems random ; and retention and placement of players on loan, seems equally so. Gnabrey couldn’t get a kick at West From and is now tearing up trees at Bayern Munich. We are clearly not keeping players who subsequently go on and do big things elsewhere. One of the big claims of Wenger’s first dozen years is that that never happened. In the last four or five years it clearly has. I could see Greenwood making a big success at Leeds. If things aren’t tightened up, we… Read more »

Tony Pulis decided Serge Gnabry “wasn’t good enough” and the kid got fat and unhappy. It happens and could’ve easily gone the other way.

Chelsea are lauded for the way they play the youth market but have “let go” De Bruyne & Salah in the last decade.

The best poker players will sometimes fold winning hands, but they make a living in the long run by making the right decisions more often than not based on the information they have.

Pulls didn’t decide to send him to West From. We did. So the ‘blame Pullis for all this’ approach rather neglects that we – or at least Wenger – agreed to place him there. And I am not trying to suggest everyone else is perfect – so that’s a straw man argument. De Bruyne and Salah did not come through Chelsea’s youth ranks. We have also shipped out players like Jeff and this guy now at Milan who have come on in leaps and bounds and are worth 15 times what we sold them for. I get the fact that… Read more »

Gnabry apart I am not sure too many academy players have left Arsenal to become big stars at big clubs. Generally the best have risen to the top and done well for Arsenal. Saka, Martinelli, Bellerin have broken through in recent times, but the reality is most will have to build their careers elsewhere.

You are forgetting that Gnabry wanted to go back to Germany. What were they supposed to do, let him sit on the bench and leave when his contract runs out?It sucks, and I was hoping they would have found a way to hold onto him, but the big mistake was the paltry sum they got for him.

Be careful Sam, far away woods are greener

And they’re also about to sign striker Rodrigo for around £35m.

Could be a thing about Nketiah being on a loan though. Greenwood is now officially a Leeds player, that should change the dynamic.
Being so young though, this coming season maybe more about bedding him in and getting cup game time?

I was thinking the exact same thing too. It’s even more strange when you consider Leeds have signed another striker Rodrigo from Valencia.

What really is the endgame here? Perhaps he really was homesick and figured Yorkshire is closer to Sunderland.

I don’t even think his natural position is as a centre forward. Watching him, he seemed to drift into the shadow striker role. It would be interesting to see where Bielsa uses him, if at all.

So no sell on clause or buy back clause in place at all? Nothing as such reported? I know the PL doesnt really do buy backs but sell ons…?

Doesn’t look like it. Bielsa has a knack of bringing on players so we’ll see what he does with Greenwood (purely selfishly from our viewpoint, hopefully not too much).

Yes, but where are the players COMING IN?
Where is Gabriel?
Where is anyone except an ex Chelsea player coming to the end of his career looking for a final pay out and easy ride?
Its the same old Arsenal.
Nothing ever changes does it?

They got to go (in fairly big numbers) so that Arteta can afford to bring some in. We’ll need to do a lot of deals in the next five weeks or so to offload players, as well as bringing in a few. There’s time, but I wouldn’t expect too much activity.

Arsenal agreed to this transfer, they didn’t have to.
So either they don’t see him making the 1st team grade or they let him move for his own happiness. Either way we should respect the decision.
I will be interested to see how he develops and wish him luck

True, we don’t have to agree to any transfer if the player is under contract. I suspect that the reason(s) for letting him go are rather more business than happiness though. The fee is small – it’s the same money (the £3 million max) that we got for winning the FA Cup final to put it into perspective. Given we’ve signed Willian on a massive wage, that fee will have been swallowed up already – and then some! The potential danger is, as always, that we let a youngster leave only to see him flourish (and increase greatly in value)… Read more »

Why are we always selling players on the cheap?
Should be £3M up front + bonus £2M-£3M
Last year we paid £6M for an unknown 18 year old from Brazil!