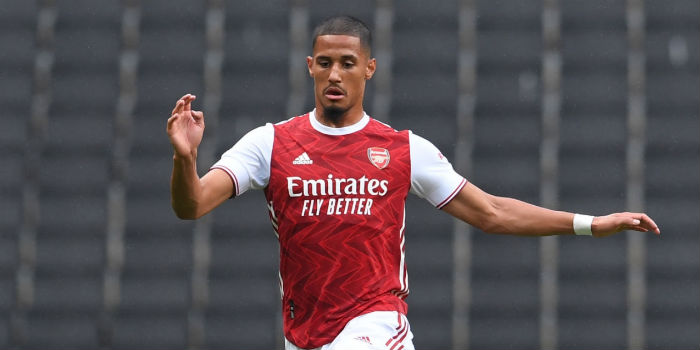 Arsenal’s pre-season preparations got rolling with a 4-1 win over MK Dons 4-1 at Stadium MK.

Despite most of his players being on holiday until yesterday, Mikel Arteta selected a surprisingly strong team. Bernd Leno returned in goal, William Saliba made his debut, Mohamed Elneny, back from his loan with Besiktas, partnered Granit Xhaka in midfield and Eddie Nketiah led the line with Pierre-Emerick Aubameyang. Ainsley Maitland-Niles, rumoured to be on his way out of the club, also started.

The Gunners raced into a two goal lead courtesy of efforts by Elneny and Nketiah. The Egyptian, back from his loan at Besiktas and partnering Xhaka, swept home from near the halfway line after the Dons keeper made a hash of a clearance. Nketiah doubled the lead before the 10-minute mark tucking home Saka’s cutback.

Elneny makes it 1-0 to Arsenal pic.twitter.com/JX1nJM1NhM

Video: From one end of the pitch to the other, 4 decisive passes later and Nketiah finishes a great goal. All started by William Saliba. pic.twitter.com/ZvYxgpntWP

The home side got one back on the half hour mark when Holding accidentally crashed home a spectacular diving header past Leno.

As expected, there were a plethora of changes after the break with Emile Smith Rowe, Reiss Nelson and Joe Willock all coming on. Further goals were added via Mark McGuinness’ thundering header and a penalty won and converted by Nelson.

Reiss Nelson scores from the spot after winning the penalty. 4-1 to Arsenal. pic.twitter.com/jQkiM7QO8R

The Gunners will return to training tomorrow and have only four days preparation before taking on Liverpool in the Community Shield at Wembley.

Cottrell and Bola looked very promising, can see some true potential there. Some of the other kids have a bit more development to do, but overall it was great to get a look at the quality in show at our academy.

What a beautiful header that was! Yeah!

It’s goal of the season mate!

Definitely the Goal of Pre-season!

Back of the net!

Mark McGuinness is a colossus and what a header! He is one to keep an eye on.

It certainly was a stout performance

Big Fcking Guinness on tap in the next couple of years, if all goes well

His build reminded me abit of Mertesacker, perhaps it was the way he moved, Be interesting to see more of him, but man, we have alot of centrebacks, time to cut some loose 🙂

Saliba is exceptionally good on the ball, impressed.

Rob Holding with the goal of the game for me, absolute worldy ?

So that’s 10 centre backs now then?

No, I think we are still on the paltry sum of nine…..

Smith Rowe looks ready for a breakout season tbh. Give him a full game and I think we’d see some magic.

Watched him this game and he didnt do much. Still lightweight on the ball.

Nelson with the socks wrapped around the ankles looked like he got something to prove. I like it. He will be a very important player for us this year I’m certain.

Nope. Doesn’t have character to do it. Rabbit in the headlights when he gets a run against decent teams.

Who pissed in your cereal this morning? Kid is 20 years old, I’m guessing you’re at least double that.

Rabbit in the headlines who slotted it cooly into the net of Liverpool?

Not a game changer, plays like he’s embarrassed to be on the field.

Just the performance to intice messi.

Cottrell and Azeez were my pick of the youngsters but what a goal by Mark McGuiness!!!
Tyreece John-Jules work rate while he was on was fantastic. He was unlucky not to score.
I was surprised Harry Clarke wasn’t in the squad. Maybe he’s going out on loan?
Looks like Folarin Balogan is leaving as he was also not included.

When Leno played out from the back, I felt a bit shaky…. Somehow this showed me that I prefer Emi

Where I can find the lineups?

I believe it is http://www.arsenal.com
But don’t quote me

How tall is Mark McGuiness? He looks huge!!

Not sure how tall he is but it looked to me like he had snow on top of his head???……
He’s bloody massive!!!!

That was a seagul mate

Injury-free as far as I can see which is good. The result was no real surprise, but a much better (albeit very early) test comes on Saturday. Anyway we’ve a pretty good recent record in “one-off” games so … .

Elneny was very poor imho. A PL-level midfielder should run rings around any League 1 team but he just looked like he was playing at their level (wondergoal notwithstanding).

Yeah totally agree. And bin Auba’s new contract too, he should be scoring at least 9 against a league 1 side!

So really we won 5-0 if Holding scored as well. Stonking header from McGuinness

Odd to see Willock play at RWB. I hope that’s not something we see more of going forwards. Guess Bellerin was unavailable and we have no youth RB’s atm?

Why is it a bad thing as long as he gets minutes and learns to play. We can’t experiment in the middle and that’s precisely why we are trying to upgrade chasing the likes of Partey.
Willock’s got the energy and the appetite and if AMN decides to leave, I would be fine with him being played there once in a while to get whatever minutes he can.

If Bellerin at RWB is tasked with playing like an AM, why not play an actual ball carrying MF and give same tasks as Bellerin

That was good…more of the same please..

Wow! The youngster, McGuinness, is a monster!

Seems like a decent game from the highlights, MK played some good stuff, especially that move on 49′. I liked how Saliba gave Rob a pat on the arm after the o.g, as if to say chin up, no stress. Shows a bit of camaraderie and team spirit. The way Saka held his run to stay onside and then cut the ball back for Eddie rather going across goal for Auba showed real intelligence and awareness. It was a good finish too. Cottrell always looks good to me. Very tidy and busy player with a nose for goal. I think… Read more »

Happy to watch our players continue to develop under mikel. On the development side i’d be happy if we can have 1 of nelson/saka/rowe turn into sane/sterling level this season.

The Arsenal lads are very exciting

I got associations from a certain Mertesacker goal vs Sp*rs on that header.

Obviously this is pie in the sky anyway. But I honestly would not have him at this point in the team’s development. You get Messi and the team is built around him. To me that makes no sense right now. The point I’m making is not necessarily just about Messi but more about what the project is at Arsenal right now. I feel really positive about what is going on in terms of direction. Messi would upset the apple cart. I doubt Mikel would want him either.

Going to reunite with Pep at Citeh, or to PSG. Possible swap deal with Mbappe who is probably sick of not winning the CL…

Could Arteta look to move someone like Chambers into that DM role like he played at Fulham?

Nice to see an Irishman scoring for the arse again