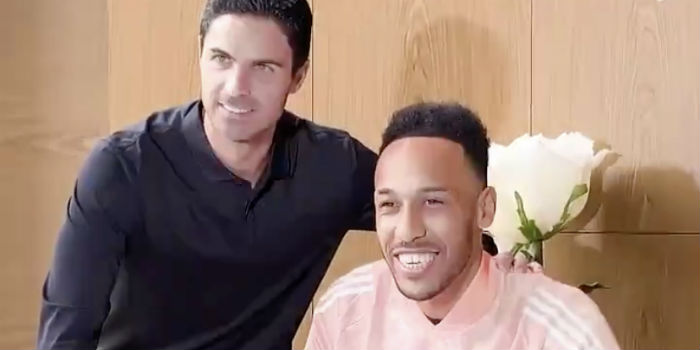 From the moment he arrived at the club in December, Mikel Arteta made it a priority to persuade Pierre-Emerick Aubameyang to commit his long-term future to the club.

After months of negotiations, today, our captain has done exactly that explaining he wants “to become a club legend and to leave a legacy.”

Having said repeatedly that he wants to build his Arsenal side around the Gabon international, Arteta is very pleased with the news.

“It was important for Pierre-Emerick to stay with us,” the Spaniard told Arsenal.com.

“He’s a superb player with an incredible mentality. Being the player to have taken the least amount of time to reach 50 goals with this club tells you everything you need to know about him and his way of working.

“He’s an important leader for the team and a big part of what we’re building. He wants to be up there with the best players in the world and leave his mark. He can achieve that here.”

After 15 years of club captains reaching their peak at the club and then leaving, Arsenal made a big song and dance on social media about persuading Auba to stay. Obviously, money talks – the striker will earn a significant pay rise – but Arteta’s role in changing the mood around the club over the course of the last nine months has been significant too.

More than anything, at a time when we seem to be building some momentum on the pitch, it comes as a relief, a theme Edu picks up on.

“It’s clear Auba loves the club and everything we stand for on and off the pitch,” said our technical director.

“He’s obviously a very important part of the team so we’re all delighted he has committed his future to us. It’s a big boost for everyone – fans, team-mates and staff.”

Tuesday cannot be said to be midweek in any way.

Don’t ask me what it is instead

I agree the news is nice

wonderful moment to us all arsenal fans
go go high”””””’

If we get Aouar Partey going this season, our rivals may just find themselves dancing to our tune.
Exciting times.

What is it instead?

B JACK
Reply to  2highbury

I mean don’t we say Champions League games are midweek… and they occur on Tuesday & Wednesday. Then are Europa league Thursdays midweek too?? ahh fuck it dont care.

AUBA signed! what a great day!

As the actress said to the bishop… .

VAR will solve the problem
Reply to  archie

It was a beautiful day at the Wembley. Sun was shining. Birds were chirping as Arsenal beat some team that no one remembers anymore to win their record 14th FA cup. Amongst the celebratory hugs and congratulations all around, Arteta’s eyes sought out only one person. The only one, he was convinced, he needed. And hugging a player here, high fiving one assiatant there as he moved through the crowd and suddenly he was standing in front of him… that magnificent man, a thoroughbred of a striker, a brillinat leader with that infectious smile that seem to lift the spirit… Read more »

Tapps
Reply to  VAR will solve the problem

I’ll have a couple of grams of that please.

So if Wednesday is hump day, what IS Tuesday? Its the pre-assist of the week. Fucking Tuesdays.

It’s Tuesday till it’s Wednesday that’s how it works?

So much more deserved than someone else on a similar contract. This guy really has contributed. The other the opposite

Santa came early this time around.

Talismanic player. Such an important signing.

A year ago, I would have leaned towards selling Auba off, just because of age.

But in the past 12 months, he has been pretty close to perfect – bunches of goals, joy on the pitch, leadership during unprecedented times, embracing Arteta’s message. I’m thrilled to have one of the best in the world on our club for three more years.

I was with you on that in terms of thinking we could use the money to help the rebuild process, but he’s become so crucial to what we do that we really would have been in a relegation scrap without him.

Yep me too. But, like you say, he turns up every game, plays with a smile, works his ass off and scores goals. The way he has captained the team has impressed me. He seems like a great guy to have around the place also. So yeah, glad he has signed.
COYG

I do suspect this seals Laca’s fate though whether he leaves this year to fund transfers or stays one more year to continue to blood in Martinelli (seems likely could play through center) or Eddie as it’s really hard to envision us giving Auba a bigger contract that Ozil supposedly, Willian his and Laca an Ozil style one. That’s just way too much tied up in 30+ year olds.

Notable, though, that Auba called up Laca during the announcement. Especially assuming we still plan to stick to our “new deal or sell if 2 years left” approach (not sure if we will, though)

I’m sure they’re mates but out of the 2, Auba is the far more difficult to replace as he’s the pure goal scorer. Laca works really hard but the difference between the 2 was showcased when Auba scored another goal which just leaves you asking how did he do that while Laca managed to shoot straight at the keeper from 3 years out following Auba’s cross. I genuinely like Laca and think he adds a lot to the team but at the same time he’s not nearly as hard to replace. The question really is just whether we keep Laca… Read more »

3 years out, that’s a long shot away probably why he didn’t s score

I had a similar feeling but it is becoming more of a phenomenon in modern sports for athletes to prolong their peak performance time. Modern methods of training, diet, lifestyle, etc. have had an impact. It now seems like 34 is the new 30.

Auba staying is a huge statement to other clubs that Arsenal mean business. We’re building the project around him and hopefully we can get back into UCL. Arteta is slowly turning the club around. Our captain and manager.

A lot of credit should go to Arteta for handling the situation in a really good way and for helping our captain to make up his mind that he is in the right place.

It would have been a big blow not to have retained him, and then have to get a replacement so it’s good news all round.

Can someone please remind me what happened between him and Dortmund? I thought it was an attitude problem but since he’s been at Arsenal his leadership and attitude have been almost as good as his playing.

Allegedly, he was late to meetings and then completely missed one that was called to, among other things, discuss player conduct. I think that by then however he had already wanted to leave but for whatever reason Dortmund hadn’t sold him. He had harsh words for their chairman/managing director on the way out and I suspect that he had been given certain assurances that he felt they hadn’t followed through on and this was his way of agitating for a move. When he left he did apologise to Dortmund supporters for his behaviour towards the end of his time there… Read more »

Will I An
Reply to  DLDC

He wanted to come to Arsenal ! Who could blame him?

Superb news! Now bag some goals at the weekend for my fantasy team 😀

Arteta has worked hard on this team – their on and off field performance.

Now for that midfielder (or two).

Onwards, upwards to the summit.

It really is amazing what Arteta has done. This is very much his influence. He just radiates positivity and there’s a real belief that this team can actually go on to achieve great things. Players like Auba don’t just stay because of money or because the fans love them. They are ambitious and want to win things and that’s where Arteta comes in. He really is wonderful.

What great news! I knew we were getting a great goal scorer with him when we signed him, but didn’t know what a great leader and team player we were getting. There were rumblings of his being a temperamental player, but he has been nothing of the sort here. Would have been a massive blow to lose him.

We are all so delighted to get this over and done. LANS?

If vardy can still perform in the league at his age now, I’m sure auba has no prob with that. Coyg

killing us, fs! ? Drogba was one mean mofo.

Fantastic news. There’s a great feeling about the club at the moment, long may it last.

I would not be shocked if the other Transfer rumours will pick up some pace because of this signature. I think Wrighty held Auba prisoner since Saturday to speed things up.
I think he might stay even longer. I see another 70 goals coming.
Up The Arsenal!

Self-motivated and selfless as a player and captain.

Glad to see him sign and inspire our next generations

Why is the flower so big

Glad this is done. I was having nightmares of Ramsey giving Auba “signing” advice.

Good to hang on to a captain for once!

Now thats what i call a LANS!