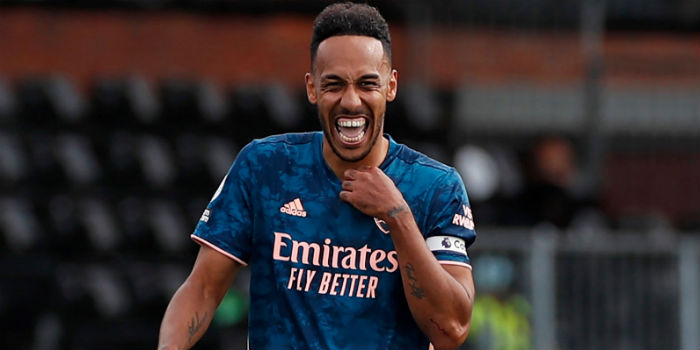 Pierre-Emerick Aubameyang says a desire to become an Arsenal legend and to leave a legacy was the driving force behind signing his contract extension at the Emirates.

After months of speculation, the club captain has signed a deal that will keep him at the Emirates until the summer of 2023, in the process securing himself a hefty payrise.

The deal was confirmed in a live video broadcast simultaneously on the club website and the player’s Instagram channel. After leaving the dressing room to walk onto the pitch, he explained, “I signed ‘da ting’ to become an Arsenal legend and to leave a legacy.”

More than 100,000 people tuned in to Instagram to watch Auba field calls from Ian Wright and strike partner Alex Lacazette.

“Signing for this special club was never in doubt,” Aubameyang told Arsenal.com.

“It’s thanks to our fans, my team-mates, my family and everybody at this club that I feel like I belong here. I believe in Arsenal.

“We can achieve big things together. We have something exciting here and I believe the best is to come for Arsenal.”

This is where you belong, Auba ❤️

Since signing from Borussia Dortmund in January 2018, Aubameyang has scored 72 goals in 111 games. He’ll only need to score 38 goals a season over the next three years to overtake Wright to go second in the club’s all-time scoring charts.

Must say that I’m loving the job that our media team is doing! Guess the powers that be weren’t exaggerating when they said that the club is heading in a new direction.

Too Drunk To Be Offside
Reply to  Kurzawa

LANS, the best one so far too.

Nobody important
Reply to  Too Drunk To Be Offside

What is this whole LANS thing? I’ve been seeing it all over arseblog

Yankee Gooner
Reply to  Nobody important

Wenger would often refer to a player who was returning from injury, especially in the absence of transfers in, as being, “Like A New Signing.” Shortened up to LANS in these parts.

MJay
Reply to  Nobody important

Your already an Arsenal legend. Best signing this window, now we just need one more to add to the Partey.

He may only need one season

Wow. Shivers. All summer I’ve been thinking he may have needed assurance that a midfield signing was going to happen. Maybe it’s romantic but I thought that he really wants to win things with Arsenal but knows that there is that piece missing from the jigsaw. He wants to be part of a team that can really genuinely compete. Has the fact that Emi and Torreira look like going freed the cash needed for Aaoauaaooaaaaar/Partey. Just a theory.

He’s gonna keep scoring for as long as he plays. I’m delighted it’ll be for us.

I see this as a huge turning point in our club….especially after historically seeing scum leave (RVP,Nasri,Song,Cole,Fabregas etc), this is a HUGE turning point!!!

VAR will solve the problem
Reply to  GoonerBot

Fabregas and Song don’t belong on that bracket of yours. Pun intended

That’s what she said

Yep. Get the statue ordered.

This guy will go down as an arsenal legend. Many players were developed by the club and left when they became something. Some of them will not have a career without Arsenal. Auba doesn’t owe us anything, he was already a world-class striker. Very few players come to Arsenal with his pedigree, yet stayed through the chaos. Now, let’s sign players and win EPL, UCL, Europa and all available titles to make him enjoy his stay.

Shout out to “My Manager” Job well done Boss Arteta

Shout out to Wrighty too. He personally took the contract to him and Papa Auba like he promised on MOTD. How can you say No to a club legend taking a contract to you personally? Wrighty swag + Arteta pull = Irresistible

Aubameyang will retire as a legend with us. Golden boot for this season sorted.

Won an FA Cup for us as captain but knows he can’t call himself a legend yet.

As fans we love to throw the word legend around too much, I just love that Auba knows what it means and what the standards are at this club

You are already a fucking legend mate!

He is the new age Henry.. I am sorry the one and only Pierre Emerick Aubameyang!

You have earned yourself a name and a lot of respect.

Maybe someone should have told him he already is a legend 😶

I mean you say that because he had signed, but if he hadn’t signed, then we would have told him he wouldn’t be one.

Sorry mate, I don’t think that is what it is. A club legend for me is someone who is loyal to the club through the thick and think like Adams, Totti or Gerrard for that matter. PEA as someone else mentioned came into our club being a world class player.

For me PEA has proved himself to be one by deciding to stay with us after the turmoil of a season we just got over with.

True, though i wouldnt have held it against him if he decided to move to barcelona, if he felt it presents the best chance for him to win some silverware in the little time he got left in his playing career

We finished 8th and he picked us over teams Like Barca and PSG. Loyalty = Legend

That’s exactly my point. He became a legend only after he signed like the man himself said. I was only pointing out that he “wasn’t already a legend”.

@Xhaka –
You’re one of the nicer, more understanding ones among us.

I don’t think the contract details (length and value of contract) has been released….

Reported elsewhere as a new three year contract (not a three year extension) that runs until July 2023. £250k/week with additional incentives for things like winning the Golden Boot or qualifying for CL, etc

Good news. Tinge of risk still for me considering age. I gather Arteta would have kept RVP had he been in charge then. Auab will give one maybe two more good seasons for us but thereafter not so sure if he can hold value. I suppose these days there is the prospect of the China market or maybe Middle East Gulf market (considering World Cup) Was risky IMO to have had Laca on market without the signature but they were correct in being confident that there was less interest from top CL clubs. Auba predominantly profits from left side (ala… Read more »

I don’t think his age should be an issue considering he has rarely been injured for an extended period since he joined us. Also alot of top class players still perform well into their mid 30’s (a lot CR7, Messi and even Vardy) so age shouldn’t be a major concern if we can keep him fit and manage him well

Top 3 tennis players are in their 30s. They’re still fit and competing on tour and in the Grand Slams. It goes a long way when elite athletes take good care of their bodies.

This would’ve been true a few years ago. Fitness science has come a long way since the days of Wenger. Ironically, its fitness that helped Wenger teams win (even with mediocre talent), but he couldn’t replicate it towards the tail end of his years.
I think if players are managed well physically, they could have a career into their mid-30s.

This is all completely true, but it’s funny that people are all so reasonably optimistic when it comes to Auba, yet raged about Willian, who’s signed until the same age and is exactly the sort of fitness-focused, injury free player who should have great longevity.

Honestly it would have been different tune if he had serious interest from CL clubs but its good to hear he values the club legend thing considering RVP could have finished his career with us as such but short sightedly went for one season of ‘glory’ and faded into ignominy.

He did have serious interest from CL clubs

Damn you marketing department! You always know how to pull the heartstrings!

I see a Thiery Henry in Auba when I watch him play don’t you agree? you could say it took all these years to find a replacement for Henry.

O Captain my Captain! Finally a Captain not sold off after one season with the armband

I just keep going back to his first game when he was on a hat trick and gave Laca the ball for the penalty. Pure class and now he is arsenal through and through.