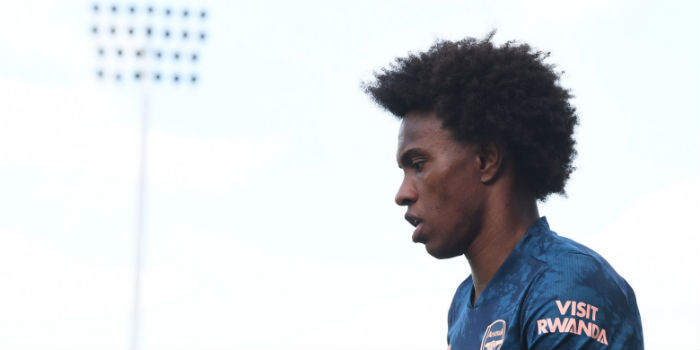 Mikel Arteta says Willian is still hungry for success despite arriving at Arsenal with a trophy-laden CV.

The Brazil international grabbed two assists on his debut as the Gunners made a flying start against Fulham on Saturday and the boss expects the 32-year-old to continue producing the goods on the pitch while serving as a role model to his younger teammates off it.

“With some players when that [winning trophies] happened they have a full stomach but with Willian I got the opposite feeling, that he wanted more and how he wanted to move to a different club and get to the level that he got before,” Arteta told his post-game press conference.

“So I’m really pleased because he showed [at Fulham] how much he really wants it and how much he is going to drive the other players on in order to achieve that.”

He added: “We have a lot of young players with a big talent and a big future but they need some role models and I think Willian is a really good one to have around the place because he doesn’t talk much in the dressing room, but he does on the pitch and that’s a good way to do it.”

The boss was also impressed with the contributions of fellow Brazilian debutant Gabriel Magalhaes.

The 22-year-old was thrust into action after only a few training sessions with his new teammates and came away with a clean sheet, a goal and eye-catching passing stats. He completed 107 out of 113 passes on a day when he and Rob Holding set the tone for the team’s performance by patiently moving the ball out from the back.

“We followed him a lot, he has very special qualities which suit the way we want to play,” Arteta said when asked what drew the club to his signing.

“One of them was his character, his personality… for him to come in and do what he does today, it’s a big trait.”

Gabriel: We want to be an aggressive defence

Certainly an excellent debut for Willian and Gabriel had a good game as well. I think we always need to remind ourselves that this was the first game – a whole 90 minutes – of a very long season. Let’s hope that Willian still has a healthy appetite, and Gabriel is just as special, come wet and windy evening games January. A few Gooners are already saying that we’re headed for a top four finish and, even, PL Champions! A fine away performance, with three goals, against a newly prompted “hungry” team looking to cause an upset against a top… Read more »

A chick that will grow into a cock is determined the day it hatches.

Awesome commentary mate…maybe next time remove the last sentence and see what happens to your likes….

Early days of course but it might at last look like we have some strong characters in the dressing room now, something we missed a lot over the past few years. Tierney, Willian, Auba, the two Gabriel boys, and of course the Arteta management… we’re gaining some winning spirit, and it will definitely benefit the whole squad.

A special thought to Patrice Evra on this one.

Everyone is just buzzing with positivity??

Well, I’ll be the first to admit that I had serious reservations about the signing of Willian. The whole thing seemed to be an afterthought bordering on a panic buy. And yet, even after just one game, you can see the Arteta Effect at work – yet again. I’m not going to ask the wife to bake me a humble pie just yet, but so far, so good. If the lad keeps proving me wrong, then that’s fine by me. As for Gabriel – he already has that solid assured look of a Campbell or an Adams. A very mature… Read more »

Respect this comment alot! The way football discussion is going, it’s as if you are finished at 30yo. It’s so reductive, and kinda disrespectful to players who work really hard on their fitness.

I hope Bloggs himself can start to speak about Willian with a bit more mercy.

This is a young man, a top player (on top wages) who still has a lot to prove before he retires. That’s all!

It’s mostly just young kids making these comments. They think real life football is like the video games they play.

I might be on the younger side myself but anyone with eyes can see there hasn’t been a better time for “older” athletes like today.

Sports science has improved drastically. My worry with Willian’s transfer is that I don’t like his representatives. The more I discover about Kia’s history, the more disgusted I am.

Watching the young guys come through last season was terrific, but watching Willian on Saturday reminded me on the trade off with having to rely so much on youth. It’s the little things, but his decision making, slightly delaying the pass, knowing when to take a man on or give and go, it just makes the team run so much more smoothly, this is what a seasoned pro brings.

It will be such a benefit for the younger players having Willian around, guys like Saka and Nelson could really develop the nuances of their games by playing along side him.

I guess expectations for Saka are even higher now, but if him and Nelson can become as good as Willian (without taking too long of course), i will be happy.

imo nelson has similar attributes to willian and will benefit immensely from him.

Any ideas for a Willian chant?

We’ve got a big Willian – we love it!

Willian, it was really nothing by The Smiths?

” he doesn’t talk much in the dressing room, but he does on the pitch and that’s a good way to do it.”

Who is the talker?

Cabellos loves piping up when he’s not happy too.

Xhaka. And I’m so glad he’s playing well because he’s always had the temperament of a winner, which was why it used to be so frustrating when his performances were poor. Even after what happened you can see there’s a reason the players voted him as captain. He’s vocal, stubbornly self-confident, and is the first to celebrate every goal with his team-mates. I just which he could dribble.

Agreed, have to say though he got so much better at turning his opponent and dribbling out of tight situations under Arteta, E.g. The match against Germany he was on point.

I laughed so hard at that last sentence.

Off topic, but wasn’t it simply ‘glorious’ to see those cunts up the Seven Sisters Road get off to a Spursy start.

Mourinho taking it out on the press and calling them lazy just added some very decorative icing to the already delicious cake of their woes.

Salibaba and the Forty Thieves
Reply to  Qwaliteee

Wish we start a match with 4231 role with Willian playing as CAM and Pepe on the right.

I think Willian will flourish in this role and Pepe Auba and Laca will benefit from his creativity. A line up against teams sitting back.

Also there is a scope to add bellerin in midfield and have a back 3 of holding, Gabrial and Tierney.

For the first time in a decade I am relaxed about leaving these decisions to the manager.

You’re not the only one, son.

A good feeling, isn’t it?

WHADDA WE THINK OF TOTTENHAM!?

I’d like to change the subject only for a brief moment and congratulate Everton on their win yesterday. Well done!

That Portuguese shit and the toilet bowl stadium make quite a couple don’t they? Match made in heaven I’d say.

Mate, I once made the mistake of mentioning how Spuds new stadium is toilet shaped to a Spud colleague. Expecting him to be a good chap willing to have laugh I couldn’t have been more wrong. He got quite aggressive and laid into me about Arsenal, how we’re all cunts, how all the players are cunts as are their families and the manager is a cunt etc. I think I was one too although I’d stopped listening by that point. So much for being a good sport. Fucking spud! I’m glad he experienced his toilet dwelling team lose to Everton… Read more »

Willian will need to find his feet with careful intro so good that Holding still available to use. Like his Brazilian inspired knee juggling. But Mangalhaes I must say (bar shaky moment at start) found his feet very quickly. And good to see he has both height and pace to burn. Looks like a very good signing for us. Hopefully it will entail us being able to go into a back 4 allowing two mids ahead of the deep lying playmaker (Either Granit or Elneny IMO). In that sense the playmaker will then be part of the defensive trio dropping… Read more »

Oops I meant Saliba in my last post not Willian. Was thinking of Willian, I’m not enamoured by the business side of it but from a football perspective he is providing us with better decision making and ball retention. As predicted it is chiefly on the need to get better from Pepe on the right. With Willian, we saw immediate dividends but also with Bellerin who dove tailed perfectly with him. The Brazilian more available (Then Pepe’s tepid attempts at times) to cover and put in tackles for the Spaniard but Bellerin also stole forward better because of that on… Read more »

Looks like Arteta trying to ensure we have several older heads around as well to provide better common sense in a game using the ball (and as example to younger players) Auba, Willian, Luiz all way over 30yrs and Laca, Elneny, Cedric 29yrs not far behind. Particularly you cans ee the difference in an older Elneny (with benefit from obviously a very productive loan out). I mentioned Elneny’s improvement is mostly on the player as the gaffer has had little time with him. Experience counts and we can see better decision making less panic from the Egyptian to before when… Read more »