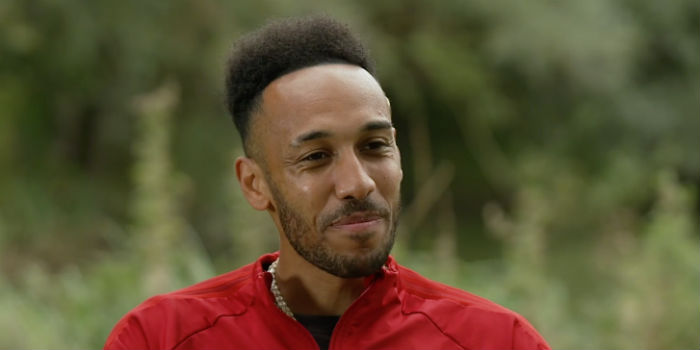 By the end of this week, Arsenal will have played Liverpool four times since mid-July.

While the Gunners have come out on top in the last two matches – a 2-1 win at the Emirates in July and a shootout victory in August’s Community Shield – it feels like tonight’s trip to Anfield, with both side keen to maintain their 100% records in the league, is the first ‘real’ head-to-head between Mikel Arteta and Jurgen Klopp.

For Pierre-Emerick Aubameyang, it certainly represents another chance to demonstrate how far the squad have come in the last few months.

In an interview with Arsenal Digital ahead of the game, he said: “Yes, I think [it is a potential marker of progress] even if it is maybe early in the season but it is still a big game, so we are going to see if we are ready to compete.

“We have started well so we just have to play hard.”

Having repeatedly cited Mikel Arteta as a key factor in his decision to stay at the club, our captain continues to lavish praise on the boss.

Asked what the Spaniard has done in and around the squad since December, he said:

“Since he came in he has brought an atmosphere that everyone feels like they are at home – so everyone has to do the homework as well!

“The mentality around the club is going very, very well and everyone is going in the same way, which is very important.

“Everyone has the same objective, the goal is to bring the club back where it belongs.”

In a separate interview with French TV station Canal +, Auba also touched on whether Arsenal can sustain a season-long title challenge.

“It would be impressive,” he said. “Our aim is to be a nuisance for Liverpool (tonight) and all season. We believe we can [win the title].”

Pray hard with a vengence.

Liverpool are unbeaten in their last 60 matches at Anfield and we have conceded 30 goals in our last 8 visits there. Expectations management, though we have beaten them in the last two matches we played them, albeit not at Anfield.

Call me crazy, but I just got a feeling we are gonna win tonight. COYG!

I have not been this optimistic about playing in anfield in a long time now.

Crazy…you and me both pal!

Anfield is a library mate! Just in case you didn’t know.

The big difference is today there is no fan present at Anfield. Anything can happen.

That sounds a teeny weeny like clutching at straws, doesn’t it? It’s true that the Anfield crowd is a fantastic plus for Liverpool (no whiff of “The Library” there” of course) but I doubt it will be a major factor because as we know they are a quality, well-drilled, team who have “seen it and done it”, as they say. We have to match them in strength and quality. Not impossible, but everyone will need to give 100% tonight, empty stadium or not.

I’m nervous as all fuck. Arteta’s pulled the pants down on this Liverpool side twice now and they have absolutely everything to prove. And they’ve not exactly shown to be the types to be shy of making a statement.

Oh yes, there’s certainly hope but Liverpool will be going all out, if only to make a very early statement to everyone else.

Anyone remember, last season we won the first two matches and before facing Liverpool , Auba saying our front 3 of him, laca and pepe can match mane, firmino and salah? Not being pessimistic here but I ll b very happy with a point today.

That front three could have matched them that day. The problem was that Monreal, Luiz, Sokratis and AML couldn’t match Robertson, Matip, VVD and Alexander Arnold. Luis conceded a stupid penalty and then gout caught out for an open play goal. Remove those two moments and it’s a 1-1 draw.

You’ve got to believe, no doubt about that Auba. However, unlike Auba I don’t believe we’ll win the title this season. It’s our first real test in the PL tonight. One thing is for sure, we’ll have to play a lot better than we did against West Ham, or it’s going to be (another) extremely difficult night at Anfield. We may nick a point, although “clever money” is very likely to be on a Liverpool win of course. Let’s hope Auba has his scoring boots on!

On paper this is actually the hardest game this season.

Though we may drop more points in the easier ones.

Yes, it’s the points dropped in the “easy” ones that are most damaging. The problem this season (so far anyway – and that’s not very far) is that form is all over the place for many teams. We’ll get a better view about Christmas time I guess. I’d be surprised if many/all of the “usual suspects” hadn’t got their acts together by then.

As long as we play our best and give 100% I am happy. Liverpool is a great team and anything we get is great. I just hope we don’t get the Arsenal that played against West Ham. We can’t afford to make silly mistakes and give the ball away. Liverpool defence is shaky if we can exploit them we should get a few goals.

To be fair West Ham are looking quite strong now.

I don’t care how but we/VAR can

A draw would feel like a win. Liverpool haven’t lost at home in ages.

Hopefully, we stay compact at the back and hit them on the counter. I think that’s the best game plan.

AMN could play LWB as well. Eddie and Pepe off the bench later in the game.

I’d guess AMN will get the nod over Saka. He’s proven himself to be very positionally disciplined and defensively more able than Saka I think.

Let’s try, although that great vintage may be a little flat after all this time.

We’ll play them real hard. It’s a dawn of a new era at Arsenal.