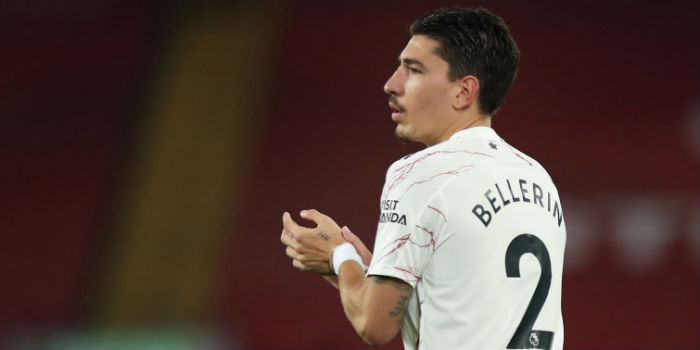 Hector Bellerin says he used the lockdown period ‘to do the dirty work’ and now feels his body is performing at the levels he reached prior to the ACL injury suffered in January 2019.

While the Spaniard returned to action at the tail-end of 2019, a series of niggly injuries have made finding consistency and building confidence a slow burn.

In recent months, it definitely feels like he’s gotten up to speed, quite literally. In the FA Cup final, he made a lung-busting run that led to Aubameyang’s winner and timely bursts forward have also been a regular feature in the fledgeling 2020/21 campaign.

Speaking after last night’s 3-1 defeat at Anfield, Bellerin says he’s been on a long journey to get fully fit.

“Yeah, I feel that coming back from my long-term injury was very difficult for me,” he told Arsenal.com.

“I felt like once I was back, my knee felt okay but really my body, in general, wasn’t in the same place as it was pre-injury and I felt during lockdown I had the chance to focus on myself and do the dirty work, as you’d say.

“I’ve come back from it way stronger, I kept working through the summer and now I feel like I’m back to how I felt two minutes before that injury. So yeah, for me it feels good. But the most important thing is that the team is playing better and better every day and that’s what makes me happy.”

Despite positive results against Liverpool in our last two outings, last night’s defeat to the champions provided a sobering reminder of the gap between Arteta’s Gunners and the top of the Premier League table.

Having been patient on a personal level, Bellerin believes the players need to be the same on a collective front as they look to implement and hone a new playing philosophy.

“I think we are working really, really well,” said the right-back.

“We’ve got new players that have come in this season and they need to get used to the system. So there’s many things but I think we can say that the fight that we put out today, in that sense I’m very proud of the boys and you know, we’ll look forward to the next game playing here.”

Arsenal returned to London last night but will fly back to Liverpool again on Thursday for a second clash at Anfield in four days. The Gunners are expected to rotate for the Carabao Cup 4th Round clash.

If he is now fully fit then there’s little excuse for last night’s inept performance when he couldn’t even manage yo take a throw-in properly.His main asset used to be his pace and his ability to get up and down the right side of the pitch.He now neither manages to attack nor defend with any real purpose…and whilst he still has some semblance of market value needs to be moved on…He’s too costly to keep solely as Arsenal’s official spokesman for all things woke!!

I’m pretty sure his ability to execute a throw-in has not been not impacted by his injuries.
Having said that, I don’t think he deserves to be singled out in what was ultimately a good performance against a team that’s frankly out of our league.

It’s annoying when he Hector takes a throw in from in the other teams half and throws it back over the half way line to our CB. Because the doesn’t trust our forward. Hopefully this season he/ they can learn to do that with William on the right

Completely disagree, throw-ins aside which were ridiculous, I thought he played quite well. His role under Arteta is completely different to that under previous managers, he’s not asked to bomb up and down the wing, he tucks in a bit to provide the extra man in midfield. I’ve been impressed with his control in tight areas and vision to make vertical passes in behind the defense. He’s also far more positional aware in defense than he was, he absolutely worked his bollix off last night.

Arteta prob has influence in his improved lvl, but Having worked closely with football injuries I hear him when he says he is finally back, Which in the end is something you have to believe to feel.

No foot Norbert
Reply to  Tungor_Adams

He’s not a good enough passer of the ball to play that tucked in midfield role. I see it as a temporary solution until we recruit better mfs, in which case he’ll ve running up and down that wing again and our right attacking wingers won’t have as many ghost games.

JBF
Reply to  No foot Norbert

I beg to differ, I think he has adapted to that role very well and his passing game is much more nuanced than you give credit for.

I think we will see this system employed regularly over the season, regardless of who we bring in over the next weeks.

No foot Norbert
Reply to  JBF

I just don’t think it’s a coincidence that our right is suffering right now and I can’t see us going through a whole season failing to attack down the right. I also don’t think it’s a coincidence when playing out the back we tend to favour the left, passing to tierney/saka or tierney/amn. A creative player would go some way to relieving the burden placed on our rb whoever that may be and will also give us the option of playing a true 3 in midfield. We can’t go another season bypassing the midfield.

Watch the first 2 goals again and see who wasn’t aware of his man behind him. His body may be back but his defensive awareness was never there and still isnt.

Actually, I thought that was Willian. I thought Bellerin had moved inside to help Holding.

And replace him with who? Hes looked pretty good so far this season. All this rubbish about moving on players while they have value is why we never get anywhere. Keep your best players and add to them.

too harsh man.. but yes he has been average for a long time. of course injuries did not help his cause but still

You look different class off late Bellerin, it sometime takes time rebuild that 100% confidence and no brakes instinct after injuries, Amazing to see you fly up and down your flank at at 110%, you are finally becoming the player you where destined to be

Bellerin has plateaued over the last 2-3 seasons if not more. Whether that is down to injuries or lack of focus we will never know. We should sell him if we get an offer of 40m+. There are more important positions to be addressed.

And play who there? Lets just sell all our players and buy 2 midfielders?.
Bellerin is more than capable of being 1st choice at right back for the next 5 years.

This. There’s a reason Barca and others were sniffing around for him. He said he’s feeling fit, doesn’t mean he’s bang on form already.

We have soares first of all and we can always buy 5-10m backup and use remaining 30m for the midfielder we badly need.

Dont get unnecessarily emotional. Its become a fashion these days.

Absolutely agree with you.

Yup I said the same thing in one of the previous articles. Been through an ACL surgery before. Takes about 18-24 months to get back to feeling normal. There might be no pain in the knee after 8-9 months but the rest of the body has adapted to working with your compromised knee in that time and it has to relearn things that you could previously. In my case there were a few things that just felt weird a year after the surgery and I had to adjust to the new body mechanics which took another 6 months. One of… Read more »

Personally I loved his break through season but I honestly think he kinda stalled a bit. I mean before his injury.
His crossing and desicion making at the final 3 is very poor which is also reflected on his stats.
Aerial duels is also very low if he wants to considered purely defensive RB.

Btw I am not saying he cannot
improve under Arteta or a more robust team structure. However it seems likely his price will decline from now on with inevitable loss of speed and acceleration

I love Bellerin and it’s okay if you don’t. It’s never in doubt that he loves the club though.

He has been average. But you can also not have 11 world class players.

He may well be feeling fully fit again, and he may have used lockdown to work even harder. But he really needs to work on his throw-in’s

Hector had a bad game last night, bt he has generally been performing much better and been more positive in his play. There have been far fewer check back and send the ball backwards in recent weeks.

Great news. We are going to need Hector back to his very best this season. He has made good progress with his injury rehabilitation and capped a fine performance in the Cup Final by making the run that was a catalyst for our winning goal. It would be utter madness to sell him.

Keep up the good work, Hector.

Prior to his injury he was one of the players that reports suggested Arteta wanted to offload. If that’s still the case (and who knows apart from the manager) then there’s little chance of anything happening in this window.

He played OK against Liverpool, but we were second best in almost every position over the 90 minutes. That’s the real worry, particularly against the ludicrous over-expectations that a few Gooners seem to have on the evidence, largely it seems, of a “good” win against Fulham!

Uh, Arteta was coaching in Manchester prior to Hector’s injury. I doubt he thought much about offloading him.

His game got a lot better after the introduction of Ceballos yesterday.
His assist in the Leicester game and his run for the second goal in the FA Cup finals makes me believe what he’s saying.

WTF are you on about?

The ref was a disgrace last night. Anyone who has refereed amateur football laughs about the constant foul throws in the professional game. I was shocked when it was given as they never are. Bellerin played alright otherwise. He was one of the few players breaking through the lines which Arsenal struggled to do all night. Liverpool should have been down to ten men and the third was a classic handball where the geezer knew exactly what he was up to and somehow got away with it. The most annoying thing about the performance was the lack of efficient pressing… Read more »