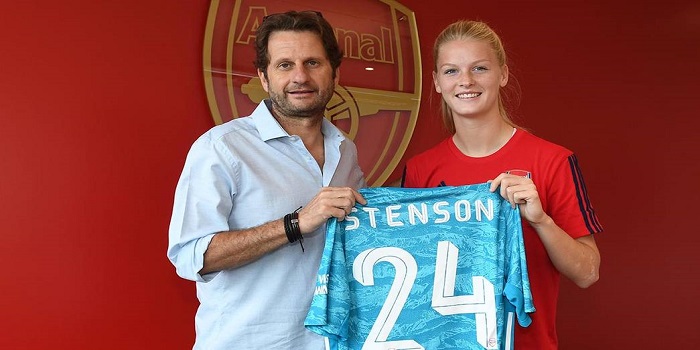 Stenson is yet to make her full debut for the Gunners, even though she already had first-team appearances for Birmingham and Manchester City at the age of 17. Montemurro made it clear to Arseblog News earlier this month that he sees Stenson, the current third choice, as a long-term challenger for the number 1 shirt.

“We’ve also decided to have a bit more succession planning with our goalkeeping this season, we’re keeping Fran Stenson with us instead of sending her out on loan [she spent last season on loan at Blackburn], we believe Fran will be a top goalkeeper for Arsenal and for England for years to come.

“We’ve been strategic this year, so we have a very experienced goalkeeper in Lydia and she’s very experienced in big games. Manu is 24 and a bit younger, so she’s in that middle bracket in terms of age and then we’ve got Fran [19] coming up.”

? "Thank you for all the love and support you've given me!" @StensonFran is here to stay! ✍️ pic.twitter.com/K0gwaLXFww

“I’m so pleased to have committed my future to the club,” Stenson told Arsenal.com. “I’ve always wanted to play for Arsenal, so it’s a dream come true. I’m so happy to cement my future here.“

“This is a really important signing for us” said head coach, Joe Montemurro. “We believe that Fran could be one of the best goalkeepers in England and for the national team. She’s an important part of our process going forward and it’s really exciting that a player of development and that level has committed herself to Arsenal. We’re privileged to be part of her development to become one of the best goalkeepers in the world.”

From what I have seen of Fran she is a good keeper already so definitely one for the near future.

Would like to see her get couple of games in next few easier fixtures in Conti or against Bristol. Put little pressure on Manu.