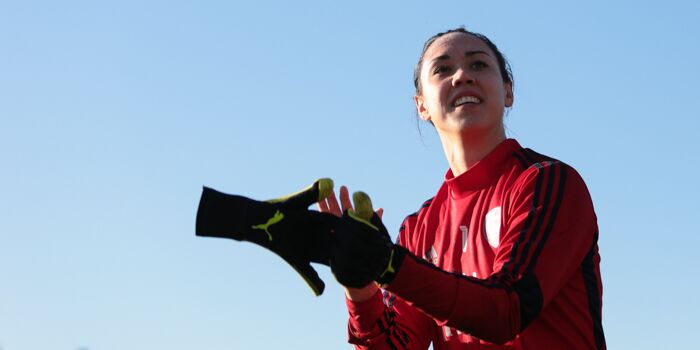 “They both have different qualities. Pauline’s long distribution is very, very good, whereas Manu excels in smaller spaces with shorter passing. We’ve done that by design so that we have both options. They have to understand phases of play too, when we’re in the build-up phase or when we’re mid-block defending- they both play a big part in that.”

This was the answer Joe Montemurro gave me back in November when I asked him about his goalkeeper rotation policy. Since his first full season in charge in 2017-18, he hasn’t had a clear first choice goalie, instead rotating between two senior goalkeepers who share the shirt.

This summer, Pauline Peyraud-Magnin left the club to join Atletico Madrid and Joe raided his native market to bring in 32-year old Matildas no.1 Lydia Williams to go with 24-year old Austrian international Manu Zinsberger and England U-19 goalie Fran Stenson, who joined the club from Manchester City last summer.

I ask Joe whether the intention is for Lydia to take Pauline’s role as ‘the long distributor’ against teams that press high up the pitch. “She’s quite comfortable with both short and long-range and it’s an area we’ve built in with Manu too, Lydia and Manu have all the qualities for long and short-range distribution.”

54' CHANCE! @samkerr1 has a shot inside the six-yard box but is denied by Lydia Williams

However, he explains that he has more than an eye on the future with his goalkeeping recruitment now. “We’ve also decided to have a bit more succession planning with our goalkeeping this season, we’re keeping Fran Stenson with us instead of sending her out on loan [she spent last season on loan at Blackburn], we believe Fran will be a top goalkeeper for Arsenal and for England for years to come.

In each of the last three summers, there has been churn in the goalkeeping position. In 2018, Anna Moorhouse left to be replaced by Pauline Peyraud-Magnin. In 2019, Sari van Veenendaal departed and Manu Zinsberger and Fran Stenson arrived. This summer, Peyraud-Magnin took on a new challenge at Atletico Madrid and Montemurro enlisted Williams, with whom he worked at Melbourne City. Lydia is expected to return to training at the end of September following minor ankle surgery. However, Joe doesn’t necessarily see the high churn of goalies at Arsenal as a consequence of the rotation policy.

“They’ve all left in different circumstances and they haven’t left because of the rotation policy or because they were unhappy with what they were asked to do. Sari [van Veenendaal] was more of a family scenario which is why we had to part ways. Pauline [Peyraud-Magnin] was for other reasons. They’ve all been individual cases that we have accepted and given our blessing.”

Another theme of Joe’s goalkeeper recruitment is that he tends to sign goalkeepers that are larger than life characters. When Arseblog News interviewed Manu Zinsberger last summer, she told us, “I want to be loud! I am not a quiet person!” Peyraud-Magnin was well liked at Arsenal for her colourful character and Williams is also an extroverted personality. Joe says it’s not a deliberate policy.

“I haven’t met many goalkeepers that aren’t extroverted!” he laughs. “The personality of goalkeepers is something I really enjoy. It fits with the type of football we want to play, they are very involved in the build-up and you probably need to be a bit crazy and be prepared to take risks to play the way we play and Lydia and Manu really complement what we are trying to do.”

In other words, you don’t have to be crazy to be an Arsenal goalkeeper under Joe Montemurro, but it probably helps…

Somebody tell Joe that Leno seems to not be extroverted.

Saw this a moment ago:

Tom Garry
@TomJGarry
· 15h
FAWSL teams will have to include at least eight homegrown players in their registered squads (of 25) from the 2021-22 season. Quota in the @FAWomensChamp will be higher, at 60% of squad size. This does not apply for 2020-21 More details here on @BBCSport https://bbc.co.uk/sport/football

Apparently Arsenal only has 5 “homegrowns” and will have to add 3 Brits to the squad by next year…Hmmm.